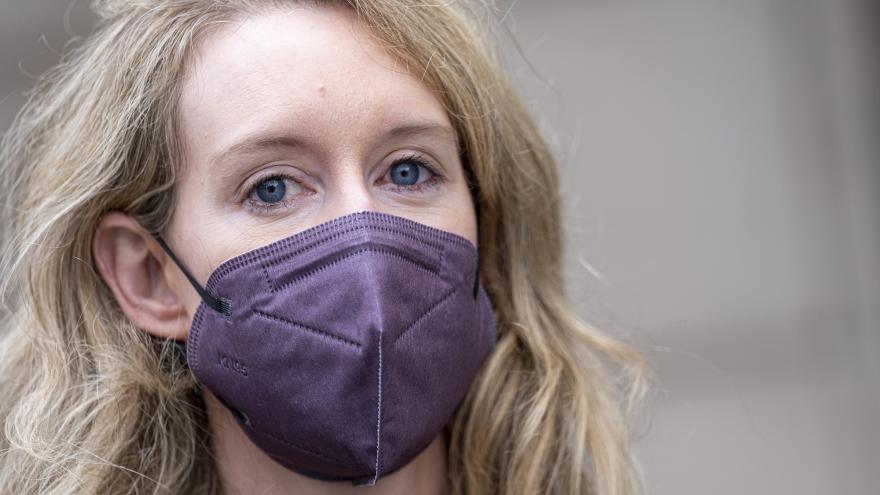 (CNN) -- Elizabeth Holmes, the former CEO of Theranos who was convicted earlier this month on four out of 11 federal fraud and conspiracy charges, will not be sentenced until September 26, according to a new filing.

The prosecution and defense had proposed September 12 for a sentencing hearing in a court filing Tuesday, stating in the filing that "following Labor Day 2022 would be appropriate in light of ongoing proceedings in a related matter," a reference to the upcoming trial of Holmes' second-in-command at Theranos who faces the same charges as her. In a court order signed Wednesday, Judge Edward Davila, who is presiding over Holmes' case, set her sentencing hearing for later in September. By that point, it will have been more than a full year since her trial kicked off.

Until then, Holmes remains free on a $500,000 bond secured by property, according to the earlier filing from the prosecution and defense.

According to the indictment, Holmes faces up to 20 years in prison as well as a fine of $250,000 plus restitution for each count. Judge Davila will ultimately decide Holmes' sentencing as he sees fit, using sentencing guidelines as a reference.

Holmes, 37, was first indicted more than three years ago alongside Ramesh "Sunny" Balwani, the former COO and president of her failed blood testing startup who was also her ex-boyfriend. Their trials were severed after Holmes indicated in court filings that she intended to point the finger at Balwani, accusing him of psychological and sexual abuse. Holmes testified to this when she took the stand in her own defense. Balwani has denied the abuse allegations in court filings.

Balwani's trial, originally set to begin this week, has been delayed, first due to the length of Holmes' trial -- which spanned four months including deliberations -- and then due to the spread of the Omicron variant of the coronavirus. In a separate court filing Tuesday, the prosecution and defense in Balwani's trial have proposed March 9 as the date to begin jury selection. Balwani has pleaded not guilty.

Holmes, who started Theranos at the age of 19, claimed to have developed revolutionary blood testing technology that could accurately and affordably test for a range of conditions using just a few drops of blood. Once regarded as the next Steve Jobs, Holmes raised $945 million from investors, catapulting her startup to a $9 billion valuation and making her a paper billionaire in the process. But her technology didn't work as she claimed, and it all came crashing down.

There were three additional wire fraud counts tied to other investors that jurors could not reach a unanimous agreement on and for which Judge Davila declared a mistrial. The prosecution indicated in the proposed joint filing that it intends to drop these three counts and plans to file a formal motion to do so by the end of this week.