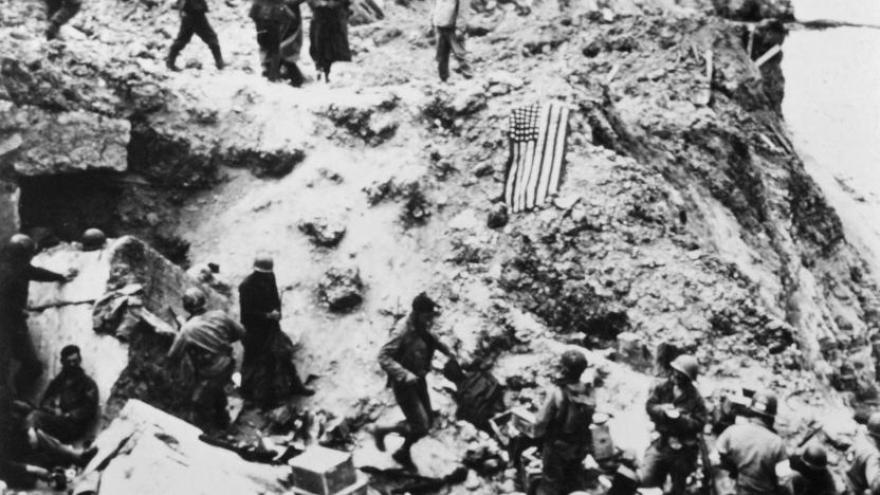 US soldiers from the 2nd Ranger Battalion surround German prisoners on June 6, 1944, on the Pointe du Hoc, located on a cliff that overlooks Omaha Beach, after Allied forces stormed the Normandy beaches during D-Day.

D-Day was the first day of combat for the 22-year-old from Fort Benning, Georgia, who followed in his father's footsteps into the military.

It was also a moment that Raaen was specially trained for as a US Army Ranger.

He was one of nearly 7,000 Rangers who served in World War II and were involved in daring missions around the world, according to the Descendants of World War II Army Rangers, a group of family members of these Rangers who are dedicated to honoring their service and preserving their legacy.

Today, Raaen is one of 13 Rangers who are still alive to tell their story.

Nearing the 78th anniversary of the landings at Normandy, the Army Rangers of World War II are one presidential signature away from receiving one of the nation's highest awards, the Congressional Gold Medal, following a bipartisan effort in Congress to recognize their bravery and sacrifice.

A 'pretty bad show' on the beach

"The gunfire was just pouring into the area we were coming into," now-retired Maj. Gen. Raaen recalled. Fires were all over the beach. Burning vehicles emitted strong odors of gasoline, oil, and leather. The ammunition inside the vehicles was exploding.

"I don't think anyone who went through it has forgotten a single moment," said Raaen, who recently turned 100. "It was a pretty bad show that we had waiting for us on that beach."

D-Day marked a new chapter in World War II, in which thousands of Allied troops from the United States, United Kingdom, France, and Canada landed on the beaches of Normandy and began to confront Nazi-occupied Europe.

The original plan was for Raaen and the rest of the 5th Ranger Battalion to follow another Ranger battalion at Pointe du Hoc, scaling 100-foot cliffs to find and destroy German artillery that could be used to attack American troops on the beach. Instead, timing delays caused Raaen and his battalion to land on Omaha Beach, where he said their intense preparations as Army Rangers served them well.

"We were too well-trained. We didn't see anything in that landing that we hadn't seen in training before, so there were no surprises,' said Raaen, who remembers the use of live ammunition during that training.

The Rangers would be the first to make it off the beach. Exposing themselves to enemy fire, they placed Bangalore torpedoes -- long tubes with explosives hooked together -- underneath the barbed wire surrounding the beach. When the torpedoes exploded, the Rangers achieved a critical breakthrough.

"We blew four holes in the wire about 50 yards apart," Raaen said. "As soon as the wire was blown, the people that were caught on the beach could follow our troops through the gaps in the wire and get up on the bluffs."

That day, Raaen recalled hearing Brig. Gen. Norman Cota, one of the top officers on the beach, say, "You men are Rangers. I know you won't let me down."

Cota's rallying cry, "Rangers, lead the way!" would outlive the war and become the official motto of the Army Rangers.

Modeled after the highly trained British commandos, the US Army Rangers were an all-volunteer force tasked with carrying out special operations and raids during World War II. Beyond Normandy, Ranger battalions were active across the world. They executed nighttime attacks and participated in landings in Italy and North Africa. In the Philippines, they infiltrated Japanese-held territory and freed more than 500 prisoners from a POW camp.

More than 70 years after the end of the war, Congress has taken action to honor this group of elite soldiers.

Both chambers passed a bill awarding a Congressional Gold Medal to the Army Rangers of World War II. The Senate approved it last October while the House followed on May 11 with a vote of 418-0.

The legislation now heads to Biden's desk to be signed into law. The White House did not comment.

Behind the effort on Capitol Hill was a bipartisan group of lawmakers with military backgrounds. In the Senate, Republican Sen. Joni Ernst, a retired lieutenant colonel in the Iowa Army National Guard, introduced the bill. Illinois Democratic Sen. Tammy Duckworth, who lost both her legs while serving in Iraq, signed on as an original co-sponsor.

"I'm thrilled that the House has taken action and cleared the way for the president to sign this important bill into law to recognize the valor and extraordinary service of these courageous Army Rangers with the Congressional Gold Medal—a small token of appreciation from a grateful nation," Ernst said in a statement.

The House bill was introduced by Colorado Democratic Rep. Jason Crow, an Army Ranger veteran himself. Republican Reps. Michael Waltz of Florida, the first Green Beret to serve in Congress, and Mariannette Miller-Meeks of Iowa, a 24-year Army veteran, came on as original co-sponsors.

Crow joined the Army in the wake of September 11, feeling the need to serve the country. After graduating from college, he was first commissioned as an infantry officer and eventually became an Army Ranger, completing three tours in Iraq and Afghanistan.

"Some of the most important battles of the war relied on their skill and sacrifice of Army Rangers. When I served our country, I was humbled to follow in the footsteps of thousands of Army Rangers who served before me," Crow said in a statement.

Ron Hudnell, whose father, Pfc. James Hudnell, served in the 2nd Ranger Battalion, began the initial push for the Congressional Gold Medal eight years ago. Hudnell himself received the Ranger Tab after completing Ranger school and served in Vietnam.

After two unsuccessful attempts in prior sessions of Congress, Hudnell credits the third try's success to the House and Senate bills being introduced sooner; more endorsing organizations, museums; and authors; and more families of World War II Rangers urging their members of Congress to get behind the legislation.

With only 13 Rangers remaining from World War II, Hudnell and lawmakers also knew time was running out to honor these heroes.

"I'm very regretful that we didn't start sooner," Hudnell, who has been involved with the Descendants of World War II Rangers as a member and board member over the last 20 years, told CNN. "I wish that I had been more aggressive many years ago when there were many more Rangers with us."

Hudnell's father died in 2007. After years of recruiting lawmakers to sponsor and support this effort, he said the bill clearing Congress is a "very exciting moment."

"I know that [my father] would be very proud of the work that not only myself, but a number of the other descendants of World War II Rangers have put into this project," Hudnell said. "He would be very happy that the country recognizes what the Rangers did in World War II."

Maj. Gen. Raaen went on to serve in Korea and Vietnam before retiring in 1979. From his home in Florida, he continues to share his D-Day experience.

"The invasion made my career and I admit it," Raaen said. "I became a hero, which I didn't feel I was. But to them I was a hero, so I got the cream jobs. I got the cream of commanders. It just made my life very easy, compared to those who hadn't really done anything in combat."

He said he felt great when he learned the bill passed through Congress and now awaits the president's signature.

"It will be a great honor to each and every one of us," Raaen said.