Elections have a dress code, too. Here's what can get you turned away from the polls 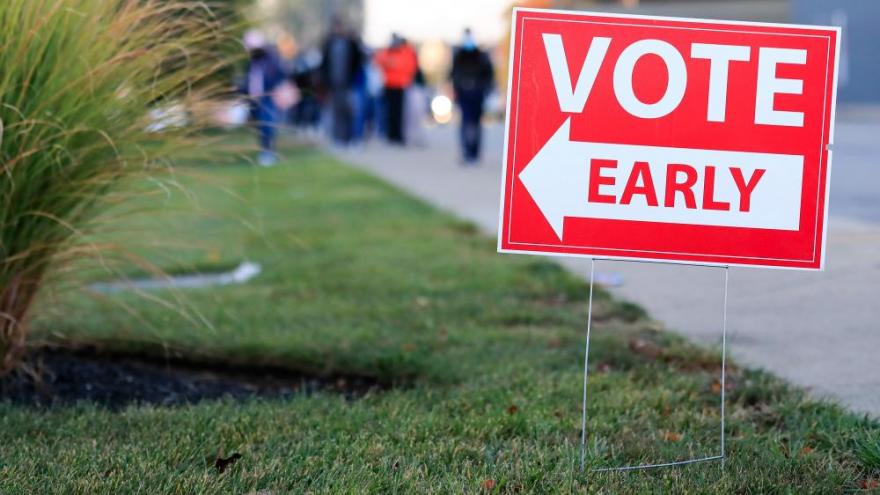 If you want to make a political fashion statement while voting, you may want to check your state rules first.

(CNN) -- If you want to make a political fashion statement while voting, you may want to check your state rules first.

Most states restrict campaigning within a certain distance from a polling place to allow people to vote without interference. Depending on where you live, that can include wearing or displaying anything with a political message.

So you'll probably want to leave that MAGA hat or "Joe 2020" T-shirt at home.

"The laws are specific to each state, and they are enforced by poll workers," says Richard Hasen, a political science professor at the University of California, Irvine. "What one can wear, and whether other laws might violate the First Amendment, would have to be determined on a case by case basis."

With early voting underway in some states before the election November 3, here's what not to wear when you head to the polls.

Every state has restrictions on political activities at voting locations. The thinking is that polling places should be free of politicking so that voters can cast their ballots in peace.

Displaying or voicing information for or against any candidate is considered "electioneering" -- another word for campaigning. Laws on electioneering at polling locations vary by state. For example, in California and Texas, political attire cannot be worn within 100 feet of a polling place. In Delaware, it's 50 feet.

"A person may not wear a badge, insignia, emblem, or other similar communicative device relating to a candidate, measure, or political party appearing on the ballot ... in the polling place," Texas law states.

In Delaware, that includes buttons, banners or other objects referring to issues, candidates or partisan topics. And in California, it also includes hats, pencils, pens, shirts, signs or stickers.

Others are more lenient -- but with fine print

Not all states have banned political attire at the polls.

In Iowa, voters can wear clothes or buttons with political affiliations -- but they have to leave a polling place as soon as they cast their ballots.

And Maine allows voters to wear a campaign button to the polls if "the longest dimension of the button does not exceed 3 inches."

State laws are less clear on wearing clothing with statements such as "Black Lives Matter" that don't express an opinion about a particular candidate or party.

Poll workers can send you home

Voters who show up at the polls with overtly political apparel or accessories can be asked to cover them, remove them or leave.

They can also be prosecuted. In Michigan, for example, someone who displays support for a candidate within 100 feet of a polling place can be charged with a misdemeanor. The interpretation varies based on the poll workers, so the safest bet is to avoid a potentially controversial item.

Some items also can be considered political if they are related to a ballot measure. For example, poll workers in some states may prohibit a #MeToo T-shirt if a specific sexual assault question is on the ballot.

Given the long lines at many early polling locations, you won't want to wait for hours to vote only to be turned away at the last minute because of something you're wearing. Check your state's elections website for restrictions.

In one case, the Supreme Court weighed in

If you want to fight for the freedom to wear what you want to the polls, you won't be the first.

In June 2018, the US Supreme Court ruled against a Minnesota law that prohibited wearing political clothing at a polling place on Election Day.

A group of voters sued after being asked to cover up when they went to a polling place wearing T-shirts and pins in support of the Tea Party, the conservative movement.

Minnesota state officials argued the law was in place to avoid voter interference and distraction. But the Supreme Court concluded that while states are free to decide what type of advocacy should be excluded from polling places, the Minnesota law was too broad.

"Casting a vote is a weighty civic act, akin to a jury's return of a verdict, or a representative's vote on a piece of legislation," Chief Justice John Roberts wrote. "It is a time for choosing, not campaigning. The state may reasonably decide that the interior of the polling place should reflect that distinction."

But Minnesota's use of the term "political" apparel was overly vague and confusing, Roberts wrote.

"Would a 'Support Our Troops' shirt be banned, if one of the candidates or parties had expressed a view on military funding or aid for veterans?" he wrote.

Minnesota has since updated its guidance to provide more specifics.

So unless you're mailing an absentee ballot, be mindful of what you wear when you vote.

And if you go to the polls and believe you're being unfairly denied the right to vote because of something you're wearing, call the Election Protection coalition's hotline (866-OUR-VOTE) or the the Department of Justice's voting rights hotline (800-253-3931).