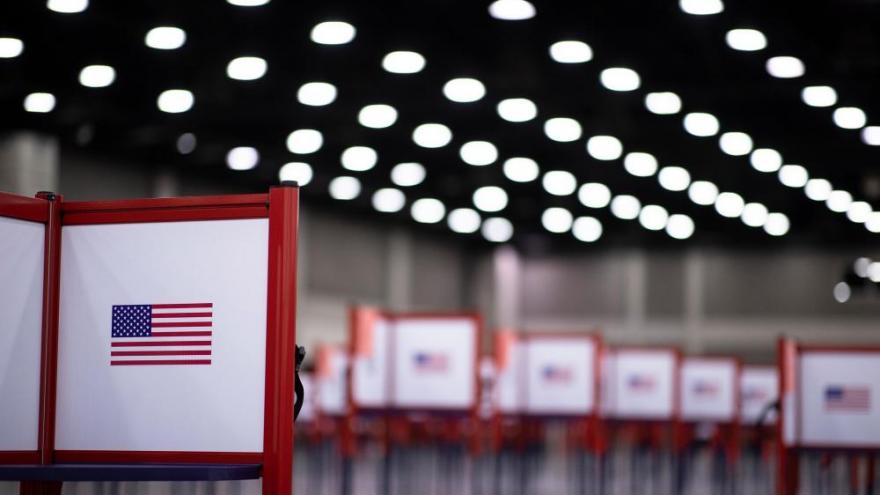 A group of national, state and private election officials said in a joint statement Thursday that there is no evidence of any voting system being compromised in the 2020 election. This image shows voting booths during Tuesday's Kentucky primary election on June 23, 2020 in Louisville, Kentucky.

(CNN) -- A group of national, state and private election officials said in a joint statement Thursday that there is no evidence of any voting system being compromised in the 2020 election despite President Donald Trump's deluge of election fraud conspiracies.

The group, which includes federal employees working in the Trump administration, added in boldfaced type: "There is no evidence that any voting system deleted or lost votes, changed votes, or was in any way compromised."

Since CNN and other outlets called the election for Joe Biden on Saturday, Trump has refused to accept the results, instead pushing baseless conspiracies that his second term is being stolen.

Meanwhile, an internal debate continues to rage over the wisdom of continuing with the legal challenges and requests for recounts in several states.

One adviser said Trump could be seen as losing twice as his attempts at challenging the results fail one by one.

Since last week, the President has been advised on numerous occasions that it's highly unlikely he will prevail in the courts, but he has plowed ahead anyway. Two advisers cautioned Trump could change his mind about the court cases, which may lead to a sudden move to bow out.

While the cases play out, the President is sowing distrust in the electoral process by making claims that votes were changed and calling for hundreds of thousands of votes to be thrown out.

The statement from the elections officials -- which included Department of Homeland Security employees and was promoted on Twitter by Chris Krebs, the head of the Cybersecurity and Infrastructure Security Agency -- urged the American public to have faith in the system.

Krebs, who has been debunking conspiracy theories pushed by Trump and his allies on Twitter, has told people in recent days he doesn't care if he is fired by the President.

A senior administration official also defended the Thursday evening statement as necessary to protect the integrity of the 2020 election.

"CISA sees its first principle as protecting democratic processes, not protecting an individual," the official said.

"While we know there are many unfounded claims and opportunities for misinformation about the process of our elections, we can assure you we have the utmost confidence in the security and integrity of our elections, and you should too," the election officials said in concluding their statement.

"When you have questions, turn to elections officials as trusted voices as they administer elections."