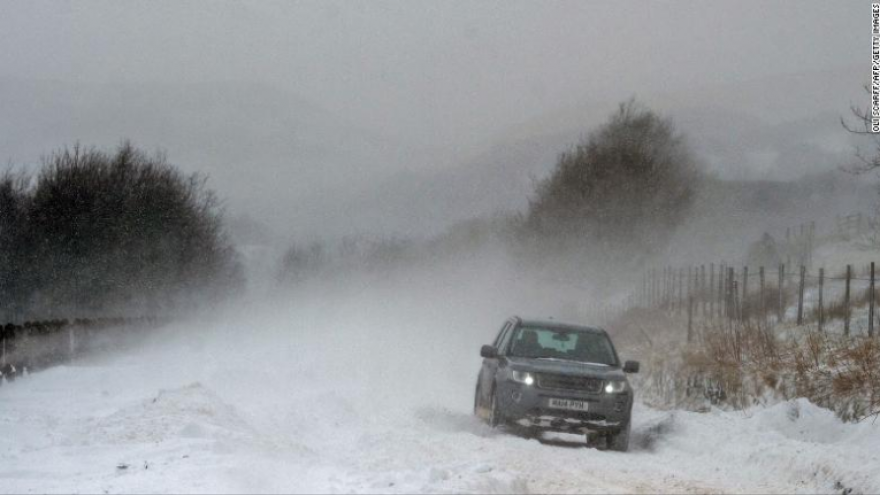 (CNN) -- An elderly couple that had been buried in snow in Arizona for an indeterminable amount of time was found dead on Friday, according to a statement from the Yavapai County Sheriff's Office.

The couple was identified as Ash Fork residents Richard Alexander 74, and his wife, Elizabeth Alexander, 79, the statement said. They were found a few minutes' walk from their own home, according to the man who discovered the bodies. Ash Fork is a rural community west of Flagstaff.

Causes of death for both husband and wife are pending an autopsy by the medical examiner, according to the police statement.

"A PRELIMINARY finding shows no evidence of foul play and a strong likelihood the pair, a man and woman in their 70's, died from exposure to the environment," according to a statement posted on the sheriff office's Facebook page.

The couple's car was found abandoned about one mile away, according to the sheriff's office.

The bodies were discovered around noon on Friday when Michael Haas and his wife Diane drove their pickup truck out of their gate and saw something peculiar, Michael Haas told CNN. His wife thought it was a dead animal, but Haas spotted blue jeans and said, "I think it might be a body," he recalled to CNN.

The couple drove forward and stopped 25 yards away. Haas said he realized there were two people — a male and a female — laying there on top of mostly melted snow. The woman was laying on her back and the man was on top of her but tilted slightly at a 75-degree angle.

"The whole situation was odd to begin with," Hass said, pointing to the strangeness of a seemingly unresponsive elderly couple laying on his property. The land is an open field and cows graze the area, but it's private property, Haas said.

Haas said he and his wife refrained from touching the bodies and called 911. The deputy sheriff arrived and secured the area with investigators and a medical examiner arriving about an hour later, he said.

Haas and his wife said they believe the couple was covered by snow for an entire week. The sheriff's office has not confirmed the length of time, but they are working on a timeline to accurately assess when the Alexanders attempted to reach safety.

"It is possible snow kept their bodies from view for a period of time," police confirmed in the statement.

Haas said the Friday after Thanksgiving brought a foot of snow and the temperature was zero degrees. He theorized that the couple's car got stuck in snow a mile from Haas's house and they tried to walk to escape the cold.

"My house was the only light they could see," Haas said. "They tried to make it to our house and made it within 100 yards."

Other residents in the area had seen the couple's abandoned car for about a week and wondered why it had not yet been towed, Haas said.

Haas said he and his wife have now put together an emergency kit for each of their cars.

"I think when people travel and it's in bad weather, they should have blankets, phone chargers, emergency equipment in their vehicle," he said.