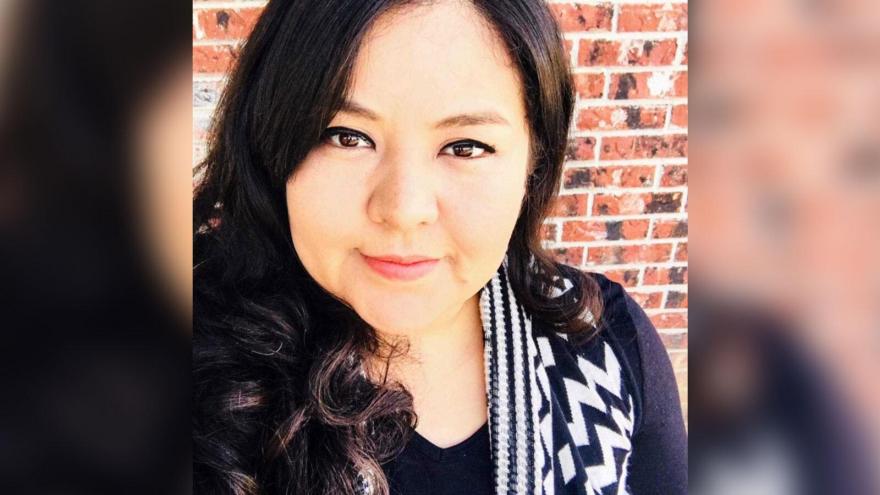 (CNN) -- Her smile and positive attitude are what her family and school community are remembering as they mourn the loss of a beloved teacher.

Zelene Blancas, a first grade teacher at Dr. Sue A. Shook Elementary School in El Paso, Texas, died Monday, her family told CNN. She was 10 years into her career as a teacher.

Blancas tested positive for coronavirus October 20 and days later, she was hospitalized, her brother, Mario Blancas, told CNN. After weeks of showing signs of recovery and taking steps on her own, her oxygen levels dropped, and she was intubated November 22.

The otherwise healthy 35-year-old never came off the ventilator, her brother said. She spent two months in the hospital before dying of complications from Covid-19, her family said.

"She was like my Wonder Woman," Blancas said. "She was my backbone, and she was like my second mother even though we are only four years apart."

The way she lived her life and how she spread a message of kindness to her students and everyone around her is how her family wants to remember Zelene, he said.

"Even though sometimes being a teacher is kind of tough ... she always looked at the positive way," Blancas said. "I didn't know until now, but she was a walking angel."

Zelene Blancas leaves behind her parents, Gloria Luna and Victor Blancas, her brother and her niece, Natalia. Her babies were her two dogs, Rocky and Chico.

The family set up a GoFundMe campaign to raise money for her medical expenses during her extended hospital stay. The family plans to hold a funeral for Zelene on January 8, her brother said.

She taught her students to be kind

The bilingual teacher came to national attention two years ago when her video of students saying goodbye to each other earned more than 22 million views. She taught her students to be kind, the school's principal, Cristina Sanchez-Chavira, told CNN.

Chavira said she remembers when Blancas captured the video just before the holiday break in November 2018. The video showed a line of students saying goodbye to a classmate, having picked a hug, handshake, high five or fist bump.

"That was her class every day. It wasn't anything that she did special or anything new," Chavira said. "The culture in her classroom was very caring, very loving. She taught her kids to be kind to each other and truly look at each other as a family."

The video was a glimpse the type of classroom environment Blancas fostered and it represented who the teacher was.

"Teachers do more than teach," she said. "The success that she had in her classroom, with her students, with her families, was because she had that passion to make a difference and to take it beyond academics for the students."

"We are all hurting because we know what a great future she had ahead of her," Chavira said. "She was a shining star. Our community, our students, her family, is short that smile, that love, that warmth that she contributed."

Chavira said you could see Blancas' passion "the moment that you would meet her."

She spread love and kindness with pink socks

That passion spread to the world in Blancas' many tweets about her students, her classroom and her work with a non-profit meant to spread kindness.

Nick Adkins met Blancas on Twitter in 2018 when he saw her video of her students hugging and leaving the classroom.

Adkins gave the teacher pink socks for all 32 students in her class, he said in a blog post. He is the co-founder of Pinksocks Life, a non-profit that promotes human connection and kindness, according to its website.

The idea is that anyone who gets the pink socks becomes a part of the mission to spread love and empathy and Blancas "lived the ethos of gifting every day," he said.

"Zelene Blancas was the best of humanity," Adkins wrote. "The ripple effect of love and kindness that she put out into the universe through teaching her kids through the years is immeasurable."

Blancas lived the mission and her legacy is the mission, Adkins wrote to CNN.

"Ms. Blancas and the entire staff and students at Shook are what we should all strive for each and every day, each and every now. She lives on in the love that she taught and spread," he wrote.

Blancas also helped her school move toward healing after the mass shooting at an El Paso Walmart in August 2019. She organized a big event at the school to get pink socks for every single student and staff member, her brother said.

Pinksocks Life raised the money and donated 1,337 pink socks to the school, Adkins wrote in a blog post.

"Her idea was basically to promote kindness because lately there has been a lot of bullying, so she wanted to flip that and make those students change and believe in kindness," her brother said.

Blancas said his sister was working on a passion project of her own, one he hopes he can bring to light. She was writing a children's book and had already drawn the illustrations, he said.

It was his sister who also inspired Blancas to become a teacher's aide and follow in her footsteps, he said.

"She was a mentor to me in a personal and professional way," Blancas said. "Thanks to her I'm going to follow her legacy and I'm going to become a teacher."