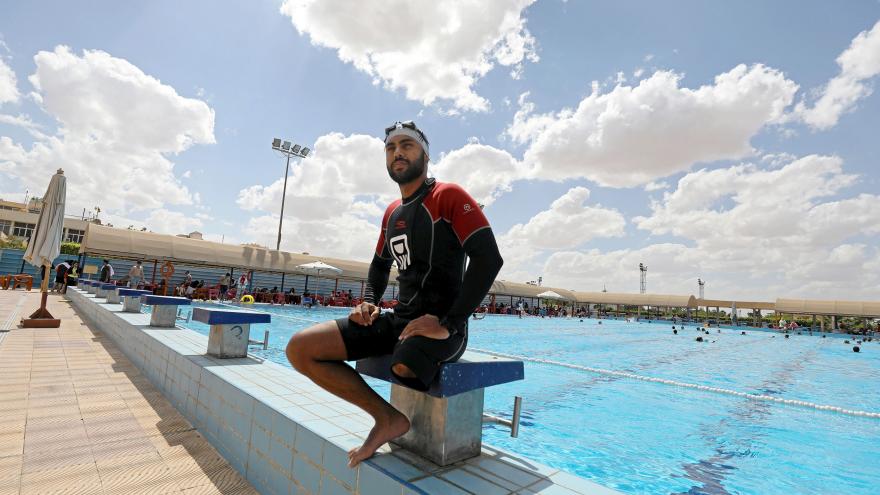 (CNN) -- An Egyptian swimmer has broken two Guinness World Records after losing his leg in 2015.

"Nothing beats the journey," wrote Hegazy in an Instagram post celebrating his records. He added he "enjoyed the friendships and the unconditional love I saw in the eyes of my friends, family and coaches."

The swimmer faced significant challenges before setting the records. In 2015, Hegazy was a 25-year-old banker in the Sinai Peninsula when he was in a motorcycle accident, in which he was run over by a truck, Guinness reported. After several days in the hospital, he agreed to have his leg amputated. He spent several more weeks in the hospital, where he had to relearn how to perform everyday tasks, like going to the bathroom independently.

"My source of motivation in the beginning was that I do not have much left to lose," said Hegazy in Guinness' statement. "I only got into swimming because I was a very angry. I found a way to I let out my anger and frustration, but it was also where I felt really free and capable."

In addition to breaking two Guinness World Records, Hegazy has also achieved other athletic milestones, like swimming across the Gulf of Aqaba in 2017 and completing a 700 km cycling challenge, according to his website.

Outside the pool, Hegazy works as a motivational speaker and advocates for people with disabilities.

"I hope these Guinness World Records titles inspire others and serve as a reminder that amazing is somewhere near you," he told Guinness. "You just have to open your eyes wide."