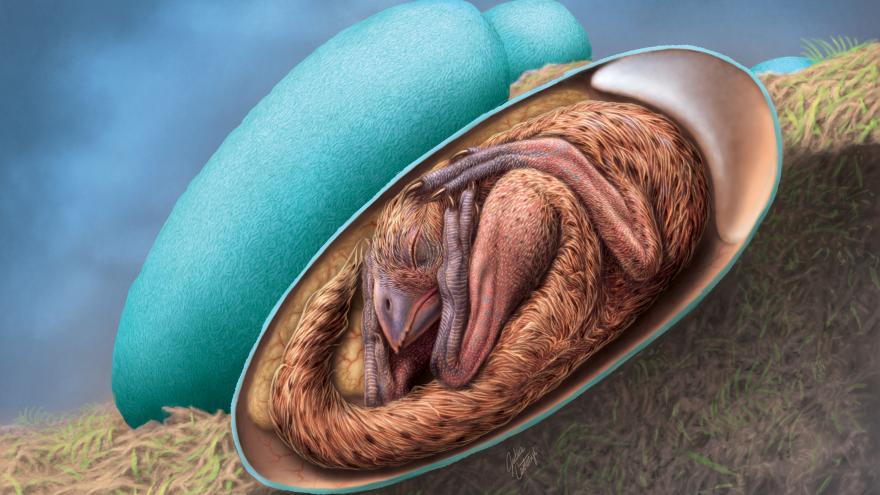 (CNN) -- Eggs have been laid on land by birds, reptiles, dinosaurs and a few oddball mammals for more than 200 million years.

And humans have been using some of these eggs as a nutritious source of food, and their shells as bowls, bottles and jewelry for most of our history on the planet.

Though they've often been overshadowed by skeletons and bones, fossilized eggshells are a fascinating source of information, illuminating the behavior and diet of ancient creatures, detailing changes in climate and revealing how our prehistoric relatives lived and communicated.

This Easter, here are six surprising things eggs have revealed about the past.

Did dinosaur blood run cold, like a lizard, or warm, like a bird? It's a topic that's long divided paleontologists.

An analysis of fossilized dinosaur egg shells suggests it's the latter. By looking at the order of oxygen and carbon atoms in the fossilized egg shells, researchers were able to calculate adinosaur mom's internal body temperature. It's a process called "clumped isotope paleothermometry."

"Eggs, because they are formed inside dinosaurs, act like ancient thermometers," said Pincelli Hull, an assistant professor at Yale University's department of geology and geophysics, and a coauthor of the study, which published in 2020.

Hull and her colleagues found that the samples they tested suggested dinosaurs' body temperatures were warmer than their surroundings would have been.

The research indicates that unlike reptiles, which rely on heat from the environment, dinosaurs were capable of internally generating heat -- more like birds.

You might think that chickens -- or even ducks or turkeys -- were the earliest birds to be domesticated by humans.

However, eggshell fragments found at two prehistoric sites in Papua New Guinea suggest that humans may have been raising cassowaries -- often described as the world's most dangerous birds because of a daggerlike claw they have on each foot -- as early as 18,000 years ago.

Territorial, aggressive and often compared to a dinosaur in looks, the bird is a surprising candidate for domestication. But a study of more than 1,000 fossilized Papua New Guinea eggshell fragments has suggested the birds were deliberately hatched.

The scientists tested their model on modern emu and ostrich eggs before applying it to the fossilized eggshell fragments found in New Guinea. The team found that most of the eggshells found at the sites were all near maturity -- suggesting they were hatched, not eaten.

Some dinosaurs were caring parents

The first oviraptor fossil -- from a family of dinosaurs with parrotlike beaks -- was discovered in Mongolia in the 1920s, lying near a nest of eggs thought to belong to a rival. Paleontologists at the time assumed that the animal had died while attempting to plunder the nest and named the creature "egg thief."

It wasn't until the 1990s that its reputation was restored when another discovery revealed that the eggs were its own. Subsequent finds -- including an oviraptosaur hunched over 24 eggs made public last year -- have revealed that this particular type of dinosaur was a doting parent.

At least seven of the 24 eggs preserved the bones of partial embryos found inside; it was the first time a fossil had preserved this level of detail. These embryos were at a late stage of development, and the close proximity of the parent confirmed that this dinosaur really did incubate its nest like its modern bird cousins.

The neat layout of oviraptor nestsalso suggested that they were brooders that sat upon eggs to hatch them -- even giant oviraptors that weighed 1,500 kilograms(3,307 pounds) and laid half-meter long eggs, said Darla Zelenitsky, a dinosaur egg expert and associate professor in the department of geoscience at the University of Calgary in Canada.

"These fossils also show very precisely arranged eggs, stacked in rings, probably optimized for sitting on the eggs," she explained.

The 2-meter-wide (6.6-foot-wide) nests of giant oviraptors were a slightly modified shape to stop them from being crushed, she added.

Dinosaurs eggs -- including one with a perfectly preserved baby dinosaur curled up inside -- increasingly show that birds inherited many characteristics from dinosaurs. Not all dinosaurs, however, were caring parents.

Pores on the surface of eggs allow the diffusion of water, oxygen and carbon dioxide, and the orientation, density and number of pores on the eggs of living animals can reveal whether they are laid in open nests or underground. Applying this knowledge to fossilized dinosaur eggs has shed light on their nesting behavior.

Analysis suggests that many dinosaurs, including hulking plant-eating sauropods, laid their eggs underground in burrows, more like reptiles.

Ostrich eggshells are found in archaeological dig sites throughout Africa. Early humans used the large eggs as water bottles and, for tens of thousands of years, ancient humans took the remains and fashioned theminto decorative beads that are still made today.

These beads have been found all over Africa -- including in areas where ostriches never lived -- sparking the question of how they got there.

The answer is hidden in the eggs' geochemistry. Researchers looked at the signatures of different isotopes or variants of the element strontium in the beads -- these vary depending on where the ostriches would have fed before laying the eggs.

Older rock formations including granite are found to have more strontium than younger rocks like basalt, and this is reflected in the vegetation that grows around them.

The geochemistry of the beads showed they traveled long distances. They were traded or exchanged in what was described as an early social network.

Eggs are a big part of our diet today -- something that was also true in the Stone Age.

In fact, ancient Australians' appetite for the eggs laid by the 2-meter-tall (6-foot-tall) Genyornis could have been one significant reason why the large, flightless birds went extinct 47,000 years ago.

Burn patterns on eggshell fragments of the giant bird found at around 200 sites across Australia, were created by humans discarding eggshell in and around makeshift fires, presumably made to cook the eggs.

Chemical signatures of nitrogen and carbon isotopes in fossilized egg shells can also track vegetation changes, gleaning information about past changes in climate, which can reveal ecological shifts that could impact the survival of these species over time.

A study of emu eggshells found across Australia over a 100,000-year time period do not show a massive shift in climate that researchers believe could have led to the extinction of Genyornis.

This suggested that the extinction of these giant birds was caused by humans, not ecological changes, the study said.

Fossilized penguin, ostrich and emu eggshells have revealed what the climate was like in the ancient Antarctic, South Africa and Australia. More recent egg collections are revealing how the current climate crisis is changing the natural world today.

By comparing birds' eggs collected during the Victorian era and modern eggs held by the Field Museum and other institutions, researchers found that several bird species in the Chicago area nest and lay eggs almost a full month earlier now than they did a century ago.

Of the 72 species documented in the data, a third have been nesting earlier and earlier, the team found. Birds that changed their nesting habits laid eggs around 25 days sooner, on average.

Similar patterns are seen in insects, which many birds eat, and plants, suggesting that climate change is already changing ecosystems, the authors of the study said.