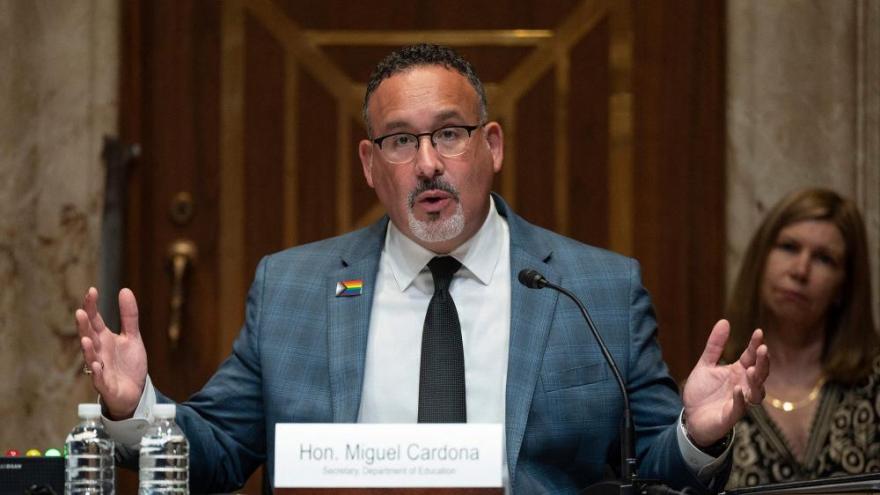 (CNN) -- The Education Department on Wednesday issued guidance that Title IX prohibits discrimination based on sexual orientation and gender identity, a reversal of the Trump administration's stance that gay and transgender students are not protected by the law.

The department cited in its decision the Supreme Court's ruling just a year ago that federal civil rights law protects transgender, gay and lesbian workers -- a ruling the Biden administration has been using during its early months to extend anti-discrimination protections to LGBTQ Americans in a number of different areas of life.

"The Supreme Court has upheld the right for LGBTQ+ people to live and work without fear of harassment, exclusion, and discrimination -- and our LGBTQ+ students have the same rights and deserve the same protections. I'm proud to have directed the Office for Civil Rights to enforce Title IX to protect all students from all forms of sex discrimination," US Secretary of Education Miguel Cardona said in a statement. "Today, the Department makes clear that all students -- including LGBTQ+ students -- deserve the opportunity to learn and thrive in schools that are free from discrimination."

The New York Times was first to report the new guidance.

The move follows a series of actions under President Joe Biden aimed at protecting LGBTQ rights and rolling back controversial moves made under his predecessor.

Last month, leaning on the Supreme Court's June 2020 decision in Bostock v. Clayton County, the Biden administration revoked a controversial Trump-era decision to end protections in health care for patients who are transgender. And in February, the Department of Housing and Urban Development announced protections under the Fair Housing Act will cover LGBTQ Americans, allowing the federal government to investigate complaints of housing discrimination based on sexual orientation or gender identity. That policy change also leaned on the justices' decision in Bostock.

The Trump administration in 2017 withdrew protections for transgender students in public schools that let them use bathrooms and facilities corresponding with their gender identity. And in January, the Department of Education under then-President Donald Trump issued guidance that the Supreme Court ruling did not protect transgender students.

During his address to a joint session of Congress in April, Biden pledged his support for transgender Americans amid efforts by Republican-led legislatures to enact anti-trans sports bans.

LGBTQ advocates applauded the Biden administration's updated Title IX guidance, with the National Center for Transgender Equality calling Wednesday "a huge day for trans youth and the people who love them."

"Across the country, politicians have targeted transgender youth for discrimination at school. Now those same kids know that the Biden administration and the US Department of Education see them for who they really are and will defend their right to fully participate in school," said Rodrigo Heng-Lehtinen, the group's deputy executive director, in a statement.

The Trevor Project, a suicide prevention and crisis intervention organization for LGBTQ youth, said the move is critical to the well-being of trans students.

"We know that trans-affirming schools can be life-saving," Amit Paley, the Trevor Project's CEO and executive director, said in a statement. "Young people spend most of their time at school and it's crucial that all students are protected from discrimination and afforded the same rights."