Eco-friendly cruise ships to be powered by sails 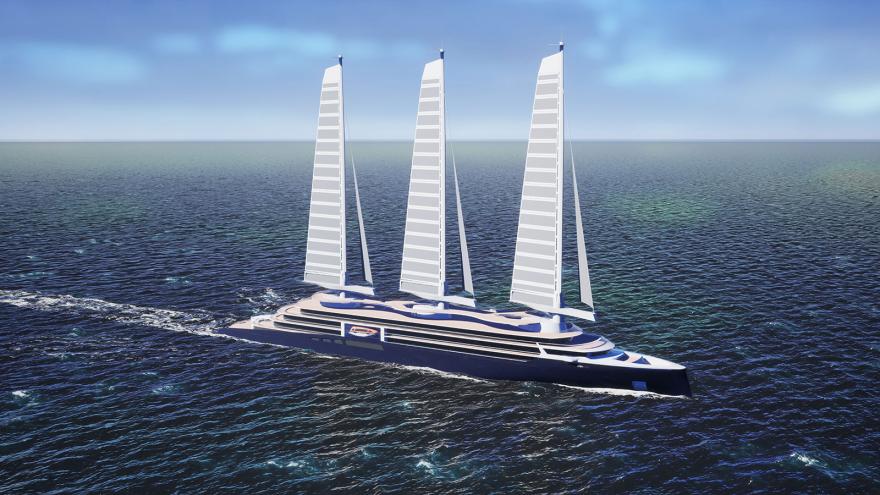 The Solid Sail/AeolDrive concept would reduce cruise emissions by up to 50%, according to the shipyard.

Chantiers de l'Atlantique -- behind top vessels including MSC Grandiosa and Celebrity Apex -- talked through the concept at an event this week, streamed live from the MSC Virtuosa, a still-to-be-inaugurated cruise ship also built at the yard.

Laurent Castaing, General Manager of Chantiers de l'Atlantique said that the team had long pinpointed sails as an eco-friendly cruising solution. However, cruise ships need large sails, which the team found tricky to construct with existing technology and fabrics.

So the shipyard decided something new and different was required.

The resulting design resembles, as the shipyard puts it, "an accordion," with folding panels that make up a sailing rig to be used in tandem with an engine and propellers -- so it's not totally reliant on strong winds.

The sail's mast can also rotate and tilt, which the shipyard says will allow cruise ships to sail under bridges -- including those lining the Panama Canal.

The Solid Sail/AeolDrive has been over a decade in the making -- and testing is still ongoing, so it'll be some time before these sails could top operating passenger ships.

There have been various testing stages, from the first step, trialing out a smaller sail on a J80 racing sailboat, to the current one -- installing a giant sail in the shipyard on a 38-meter mast this fall, which will extend to a 95-meter mast in 2022.

French sailor Jean Le Cam has also been involved in the testing process, trying out early versions of the sails on his yacht, as well as on a 90-meter cruise ship that traveled across the Atlantic.

Chantiers de l'Atlantique also presented a design for a custom three-master sail, 200-meter cruise ship, which it called Silenseas, at the 2018 and 2019 Miami Seatrade Cruise Exhibition.

The shipyard said this "attracted great interest" from industry players.

The design recalls other eco-friendly sailing vessels that have made waves in recent years, from Oceanco's Black Pearl, renowned for its three jet black sails and winner of the Superyacht Awards Sailing Yacht of the Year in 2019, to transatlantic car carrier Oceanbird, a vessel fueled by five collapsible sails.

Chantiers de l'Atlantique reckons the Solid Sail/AeolDrive could also work for the superyacht market, but it's been designed with cruise ships in mind, as the Silenseas rendering demonstrates.

The cruise industry is currently in something of a stalemate in the wake of the Covid-19 pandemic, with many cruise companies suffering financial losses and the future of cruising still uncertain.

For one, back in 2020, MSC Cruises signed a contract to partner with Chantiers de l'Atlantique on upcoming projects, including the development of sail-fueled cruise ships.