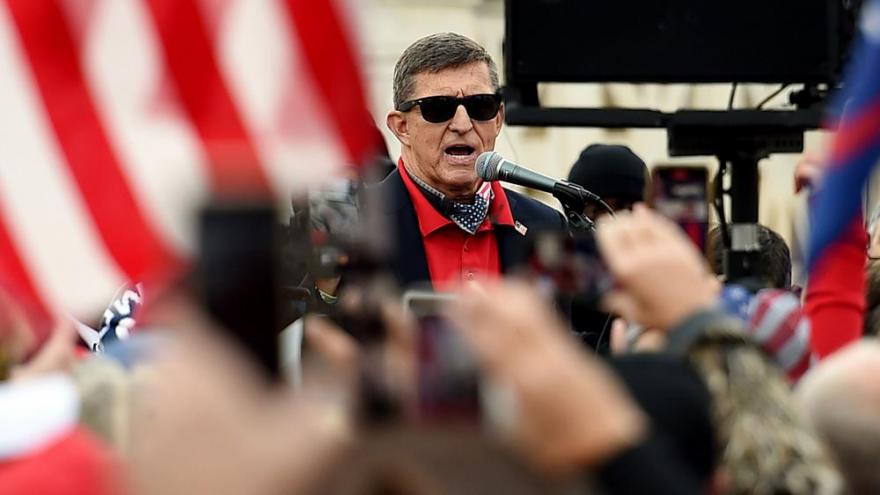 Former national security adviser Michael Flynn is seen as a hero in the QAnon movement.

(CNN) -- Michael Flynn, former President Donald Trump's first national security adviser, is claiming he didn't endorse a Myanmar-style coup over the weekend despite video in which he appeared to support such an overthrow in the United States.

For months, QAnon and Trump-supporting online forums have celebrated the deadly military coup in Myanmar and suggested the same should happen in the United States so Trump could be reinstated as President.

Flynn made the comments at an event in Dallas on Sunday that was attended by prominent peddlers of the QAnon conspiracy theory and the Big Lie.

"I want to know why what happened in Minamar (sic)can't happen here?" a member of the audience, who identified himself as a Marine, asked Flynn.

"No reason, I mean, it should happen here. No reason. That's right," Flynn responded.

A message posted to a Parler account used by Flynn on Monday, however, claimed Flynn's words had been twisted.

"Let me be VERY CLEAR - There is NO reason whatsoever for any coup in America, and I do not and have not at any time called for any action of that sort," the message said.

Lawyer Sidney Powell, who has represented Flynn in the past, said Monday that he had in no way encouraged "any act of violence or any military insurrection." She claimed the media had "grossly distorted" Flynn's comments. She did not explain why Flynn had answered the question the way he did.

Powell was present at an Oval Office meeting in the closing weeks of Trump's presidency during which Flynn suggested that Trump could invoke martial law as part of his efforts to overturn the election, CNN has reported. It wasn't clear whether Trump endorsed the idea, but others in the room forcefully pushed back and shot it down.

Some QAnon followers are obsessed with the idea that the US military will somehow put Trump back into office. Some believed and hoped Trump would declare martial law on Inauguration Day to stop Joe Biden from entering the White House.

Speaking at the same event in Dallas, Flynn earlier in the weekend falsely claimed, "Trump won. He won the popular vote, and he won the Electoral College vote."

GOP Rep. Liz Cheney of Wyoming, whom House Republicans recently voted to remove from her leadership position after she publicly and repeatedly rejected Trump's election claims, tweeted on Monday afternoon: "No American should advocate or support the violent overthrow of the United States." A link to an article with the news of Flynn's Sunday remarks accompanied the tweet.

Rep. Elaine Luria, a Virginia Democrat who vice-chairs the House Armed Services Committee, said later Monday that Flynn's comments were "dangerous" and "incredibly concerning," adding that she thinks official action against him should be considered.

"Flynn's remarks border on sedition. There's certainly conduct unbecoming an officer. Those are both things that can be tried under the Uniform Code of Military Justice and I think that as a retiree of the military, it should certainly be a path that we consider to have consequences for these types of words," Luria, a retired Navy commander, told CNN's Anderson Cooper on "AC360."

Flynn is seen as a hero in the QAnon movement. Last summer, Flynn posted a video featuring QAnon slogans. In a recent interview, Flynn attempted to distinguish between the QAnon movement, which is known for outlandish conspiracy theories, and its followers, saying: "What I tell people to do is look at the people that are involved. Look at the values that they espouse and let's move along."

Flynn pleaded guilty in 2017 to lying to the FBI over his conversations with Russia's ambassador and for a time cooperated with special counsel Robert Mueller's investigation into Russian meddling in the 2016 presidential election. But as his case swerved toward a possible brief prison sentence, Flynn fired his lawyers, replacing them with a defense team that worked to unravel his plea in court and publicly campaigned for the pardon, which he ultimately received from Trump in November.

The Dallas event, titled "For God & and Country Patriot Roundup," had been planned for months. Concerns about the event contributed to the Health and Human Services Department's decision to transfer unaccompanied migrant children from a nearby location in the city, CNN reported earlier this month.

Powell, who has frequently pushed the falsehood that Trump was reelected, also appeared at the event and said Trump should be "simply reinstated" and that a "new inauguration day is set."

Talk among Trump supporters of a coup not only happens online; CNN spoke to followers of the former President in Ventura, California, in February who said they wanted to see a Myanmar-style coup happen here.