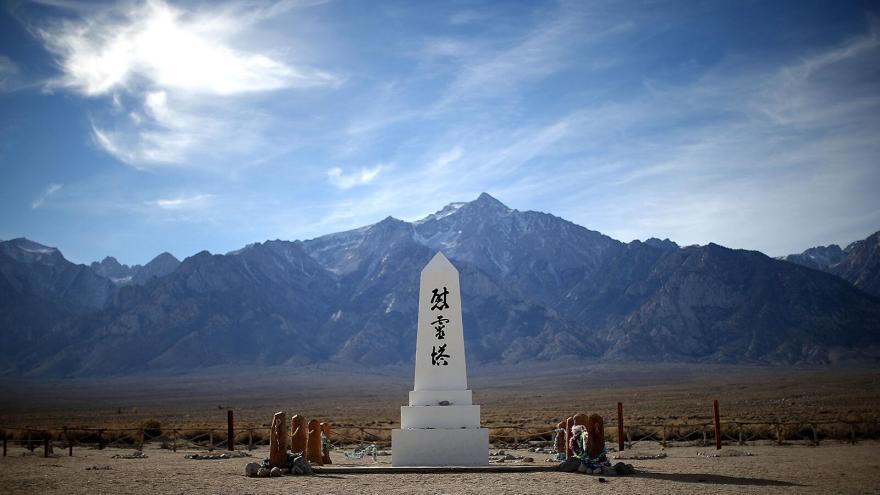 A monument stands in the cemetery at Manzanar National Historic Site in California.

Each of the 20 black and white sketches artfully depicts a natural landscape.

Pine trees and mountains set against a bright orb in the sky. Cartoonish leaves splayed out like tentacles. Unearthly limestone columns towering before an ominous cloud.

Their origins, though, are darker: They are believed to have been created by an artist in Manzanar, the concentration camp in California's Owens Valley where thousands of Japanese Americans were incarcerated as a result of the United States government's racism and hysteria during World War II.

When Japanese American community leaders were alerted recently to the fact that these drawings had been put up for sale on eBay, they immediately began organizing to stop the auction.

"We don't feel that Japanese American history -- particularly around the trauma of racist policies that excluded, forcibly removed and incarcerated 120,000 residents from the West Coast -- should be sold or used for profit," said Rick Noguchi, chief operating officer for the Japanese American National Museum.

After a meeting with Japanese American activists on April 6, just hours before the auction was set to end, eBay decided to halt the sale of the artifacts, determining that it violated the company's artifacts policy. At the time, the bidding had reached $470.

This wasn't the first such sale

The drawings from Manzanar are just the latest artifacts from Japanese American concentration camps to be saved from the auction block.

In 2015, a New Jersey auction house was set to sell a collection of about 450 such objects, including paintings, photographs and handmade jewelry. The artifacts had been collected by the crafts expert Allen Eaton and eventually came into the hands of a family friend, who had decided to put them up for sale.

Nancy Ukai, project director for the digital history website 50objects.org, was one of the leading voices behind the effort to stop that sale.

Her grandfather and mother, along with several other relatives, were incarcerated in the camps during the 1940's. She recalled a story about how her grandfather, afraid that he'd never experience the smell of eucalyptus leaves again, brought the plant with him to the camp.

"Artifacts have a really important meaning to not only me but to our community," Ukai said. "There's a greater understanding in the world now that things have histories, and that these histories have been erased or concealed or allowed to stand uncontested."

The now-withdrawn listing on eBay comes at a time when Asian Americans have been experiencing heightened racism and discrimination.

"It's very triggering for many people to see these items now being placed up for sale on eBay by unrelated individuals who perhaps obtained them through chance or random randomness but perhaps don't understand the meaning behind what these artifacts actually do bear for the families that were incarcerated," Inoue said.

She believes her father drew the sketches

Lori Matsumura, a third-generation Japanese American in Santa Monica, California, first learned of the drawings on eBay from a ranger at the Manzanar Historical Site.

Matsumura is the granddaughter of Giichi Matsumura, who was incarcerated at Manzanar and disappeared during an outing in the mountains after stopping to paint. Her father, Masaru Matsumura, was an artist, too. The ranger wondered if the sketches, signed "MATSUMURA," might have been drawn by one of her family members.

When Matsumura looked at the listing, she said she believed the drawings to be her father's. She even compared the signatures on them to an old high school assignment of his -- and the two appeared similar.

Matsumura's first reaction was to bid on the collection, a desperate attempt to acquire what she felt were important family mementos. Then, the gravity of the situation sunk in.

"It just made me angry that I would have to bid on my own family's artwork to get it back," she said.

Multiple families with the name "Matsumura" were incarcerated at Manzanar, and Lori Matsumura's claim to the drawings hasn't yet been verified.

Japanese American groups who spoke with CNN said that they hoped to work with eBay on brokering a conversation between Matsumura and the seller -- and potentially facilitate a return of the items.

The provenance of the items is unclear

It's unclear how the drawings came into the hands of the eBay seller, whose full identity is unknown.

The seller told the Associated Press that the collection came from the family of a former girlfriend in the 1980's, though they declined to confirm this detail to CNN.

In messages to CNN, the seller described themselves as a small time art and antiques dealer and said they weren't aware that they were violating eBay's artifacts policy, which prohibits the sale of items from government or protected land.

The seller apologized for the hurt caused by the listing and expressed a willingness to send the items their rightful owner.

"I am not interested in making a profit on these pieces, since they are part of history," the seller wrote. "I would rather give them away to a right individual rather than donate them to an institution."

Other artifacts from this era are still up for sale

That eBay removed the drawings from auction is a significant first step, Inoue said.

But numerous other artifacts from the period of Japanese American incarceration continue to be sold on the platform.

The Japanese American Confinement Sites Consortium, a collective dedicated to preserving the historical experiences of Japanese Americans during World War II, says they're continuing to work with eBay on applying its artifacts policy to similar items.

Inoue said that his organization and other members of the consortium also planned to discuss with eBay the potential creation of algorithms that would be able to flag violations of the company's policies on the front end.

Noguchi, the COO for the Japanese American National Museum, says the group would like to see all items associated with Japanese American concentration camps be banned for sale on eBay. (eBay did not respond to a question from CNN about whether it was considering such a ban.)

"It is offensive to see and to have this reminder that people are profiting off of this history," he said. "For many Japanese Americans that either were affected by those policies or had parents or grandparents affected by them, it's just a really negative reminder of it."