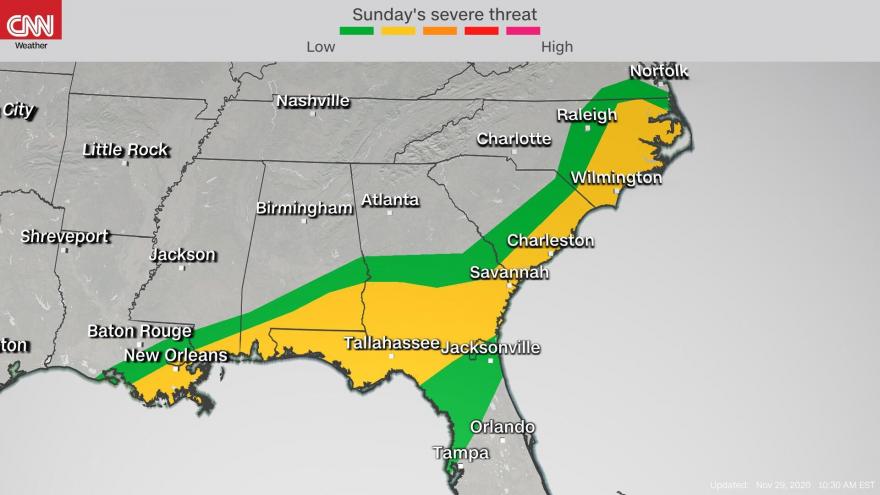 Roughly 15 million people from Louisiana to North Carolina are under the risk of severe weather today ahead of the developing system, according to CNN Meteorologist Haley Brink.

(CNN) -- In typical 2020 fashion, the East Coast's first major storm system of the fall will arrive right as we say good riddance to this year's record-breaking hurricane season.

Roughly 15 million people from Louisiana to North Carolina are under the risk of severe weather today ahead of the developing system, according to CNN Meteorologist Haley Brink.

Above-average temperatures will surge northward from the Gulf of Mexico in advance of the weather maker. The system's unstable air will lead to the threat of damaging winds, isolated tornadoes and heavy rain. Rainfall amounts will add up to 3 inches for many, with isolated higher totals, which could lead to flash flooding in areas.

The system will further strengthen on its trek up the eastern seaboard on Monday, spreading the threat for severe storms into the Mid-Atlantic and heavy rain into the Northeast.

"It will even produce snow for parts of the US as we start the new work week. We expect widespread 2 to 4 inches of snow for the Great Lakes, with 8 inches possible near Lake Erie. Light snow and flurries are in the cards down the Appalachians and into parts of the Southeast, too. It won't be confined to just the Great Lakes," said Brink.

That's because cold, wintry air will ooze down from Canada in the system's wake. It will be the lowest the mercury has dropped for many since last winter, resulting in temperatures that are about 20 degrees below normal for this time of the year.

Even Florida won't be spared from the cold. The air in the Sunshine State will have a bit of a bite to it by midweek, going from afternoon highs in the 80s over the weekend to early morning temperatures in the 30s and 40s on Wednesday.