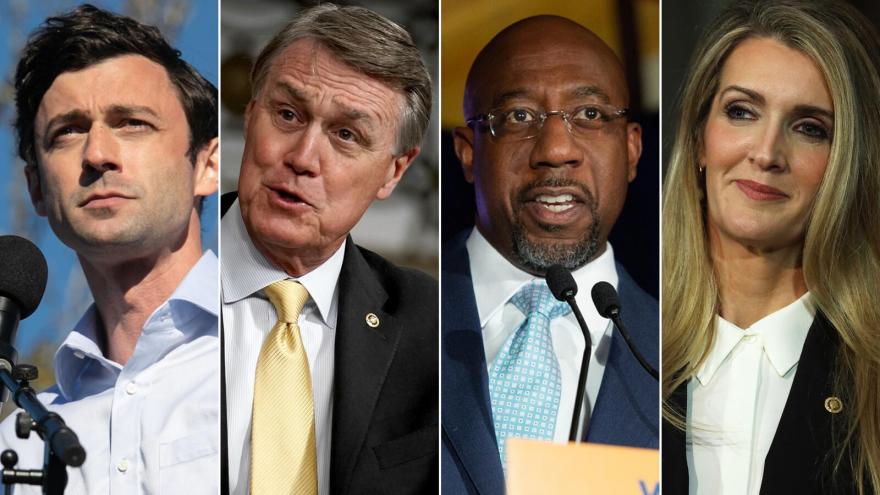 Democrats Jon Ossoff and Rev. Raphael Warnock are challenging incumbent GOP Sens. David Perdue and Kelly Loeffler, respectively, in a pair of races that weren't settled in November's elections because no one received a majority of the vote in either contest.

(CNN) -- All eyes are on Georgia as the state begins early voting on Monday for two Senate runoff elections that will determine control of the US Senate.

But there will be fewer early voting sites available in some parts of the state than there were for the November general elections, which has upset voting rights and advocacy groups in the state who say the changes will lead to longer lines, longer wait times and more barriers -- especially for voters of color.

Democrats Jon Ossoff and Rev. Raphael Warnock are challenging incumbent GOP Sens. David Perdue and Kelly Loeffler, respectively, in a pair of races that weren't settled in November's elections because no one received a majority of the vote in either contest. The top two vote-getters in each race advanced to the January 5 runoffs. Early voting ends on December 31.

If Democrats can flip both seats, they'll control the Senate since Vice President-elect Kamala Harris, as Senate President, will be able to break ties in the chamber.

In Cobb County, outside of Atlanta -- the state's third largest county -- only five early voting sites will be open, compared to 11 during the general election. The county said on Wednesday they will open two additional sites during the third week of early voting, bringing the total locations to seven.

Lines of early voters began forming before the sun rose in Marietta, despite rainy weather. People wrapped themselves in blankets, carried umbrellas and huddled under lawn chairs.

President-elect Joe Biden will be visiting the state on Tuesday, the second day of early voting, to encourage Democrats to get out and vote for Ossoff and Warnock during the early period. Other Democratic surrogates, including former Housing and Urban Development Secretary Julián Castro, traveled to Georgia last week to rally voters to register and take note of the start of early voting.

Each candidate has been pushing early voting, mentioning the starting date during events on the campaign trail, on social media and in interviews on local and cable news.

But Republicans have been forced to juggle two messages seemingly in conflict -- the need to vote early and turn out for the runoffs with the need to appeal to President Donald Trump, who has spent the weeks since Georgia was called for Biden deriding the state's voting systems.

"Honestly, we're not sure what happened November the 5th, you know what I mean?" Agriculture Secretary Sonny Perdue, a former Georgia governor and the cousin of the incumbent senator, told voters in Woodstock last week. "First of all, we can pray, but we need to vote early, either in person or by absentee... we got ice storms in Georgia, it can happen on January the 5th. And that would be tragic, would it not, if we as Republicans wait for that last day and go vote in person -- let's go out vote early."

But when Loeffler took the stage at Trump's Valdosta rally earlier this month, to ask voters to vote early, her pleas were drowned out by chants of "Stop the Steal" and "Fight for Trump!"

Still, Republican voters like Cherokee County's Brad Carver said the stakes are too high for voters not to use every weapon in their arsenal.

"Because of the stakes in this election, I voted early," Carver told CNN during a phone banking session. "And frankly, I did so very easily. And so, you know, I think a lot of our voters still will vote early in person."