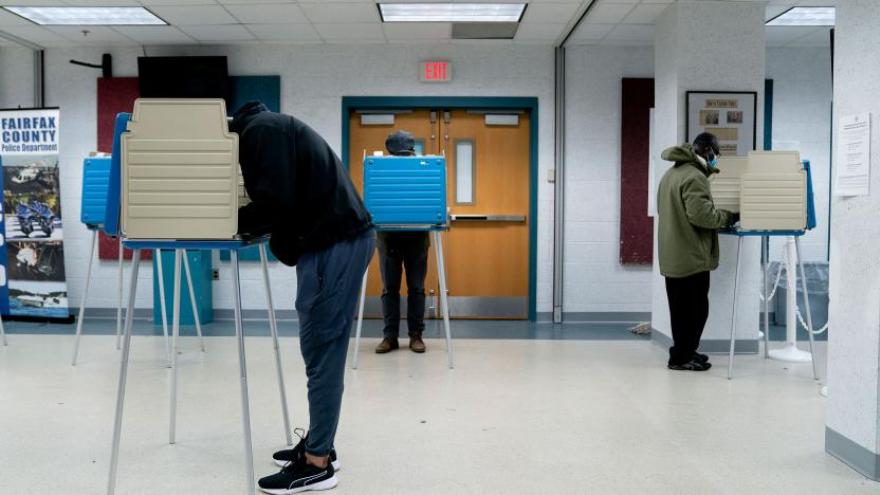 Voters fill out their ballots at an early voting center at the Mount Vernon Governmental Center on October 31, 2020 in Alexandria, Virginia.

(CNN) -- Millions of Americans have already cast their ballots ahead of Election Day, smashing mail-in and early voting records and raising election officials' hopes that the eye-popping early vote totals will ease the potential for problems, chaos and conflict at the polls on November 3.

States have set records for early voting totals, many approaching and in some cases even surpassing the total number of votes cast in the 2016 election.

Since voting began in September, there have certainly been issues at the polls, including hours-long waits, allegations of voter intimidation and suppression -- as well as incidents like one in North Carolina on Saturday, where police used pepper spray to break up a march to a polling place. But by and large, the worst fears of widespread problems or violence disrupting early voting did not materialize in what's arguably the most contentious election in recent memory.

Still, concerns persist that tensions over the bitter contest between President Donald Trump and former Vice President Joe Biden could boil over on Election Day, whether at the polls or afterward when the results are tallied. Local officials have warned that Trump's rhetoric about the polls -- urging his supporters to "go into the polls and watch" -- could lead to conflict. In Washington, DC, businesses near the White House have been boarded up in anticipation of potential rioting and looting.

Rising Covid-19 cases in nearly every state add another problematic layer to preparations for Election Day, escalating voters' fears about going to a crowded polling place and potentially threatening the loss of critical polling workers who test positive or have to quarantine.

The coronavirus pandemic led to a chaotic primary in several states during the spring, prompting many states to make major changes to their voting rules to encourage more ballots to be cast by mail or ahead of Election Day. Now the big question looming over the record-breaking early vote totals is what do they mean for Tuesday's polls: will turnout be significantly smaller than normal because so many voted ahead of time? Or is it merely foreshadowing a record-breaking overall vote total -- and there will be long lines on November 3, too, when voting will take longer than normal due to the pandemic?

There are still potential court challenges to early votes, too. In Texas, a federal judge set a hearing Monday on a Republican challenge to 100,000 votes cast in Harris County, the Democratic stronghold including Houston, via drive-thru voting centers. And a Nevada judge is set to rule Monday on a GOP lawsuit seeking to halt early count in Clark County, which includes Las Vegas, over the stringency of signature matching computer software and how closely observers can watch votes being counted.

Local election officials are hopeful that all of the early voting will make things smoother on Tuesday, even in places where lines were a major problem during the primary, like Detroit. Some counties have even extended the hours for early voting due to such high demand, including in Texas, New York and Virginia.

"We don't anticipate significant long lines" on Tuesday, Michigan Secretary of State Jocelyn Benson said at a news conference last week. "Because two thirds of our citizens will likely vote absentee or prior to Election Day, we will see a third of our citizens, probably about 2 million, vote in person on Election Day."

"If you do choose that, Benson added, "we're confident that your health and safety will be protected and you don't have to anticipate long lines."

Gary Sims, director for elections in North Carolina's Wake County, which includes Raleigh, said early and mail-in voting has helped spread out voters, but he still is anticipating significant turnout on Tuesday.

"Everyone spreading out when they vote has been key to safely voting during this pandemic," Sims said. "We do still expect steady turnout on Election Day."

The coronavirus pandemic, which took hold in the US just after Biden emerged as the winner of the crowded Democratic primary, scrambled many of the remaining primaries. Some states postponed their elections. Wisconsin's Democratic governor tried to do so but lost in a court fight with the GOP-led legislature, leading to chaos and some coronavirus cases tied to polling places.

In response, many states turned to expanding early voting, some allowing all voters to request an absentee ballot and others moving most of their election to vote by mail. More Democratic voters told pollsters they planned to vote by mail, while Republicans shied away from the notion thanks to relentless false attacks from Trump on mail-in voting and fraud.

But as the general election neared, two factors turned more voters to cast ballots early and in person. One was that Democrats began to shift their strategy on in-person voting, encouraging voters to vote early and in-person, due to a higher rate of ballot rejection to absentee ballots.

The second was that the US Postal Service began to see service delays this summer under new Postmaster General Louis DeJoy, a major Trump donor who had implemented cost-cutting measures.

As a result, many voters opted to drop off their ballots or cast votes early and in-person instead of through the mail, because they didn't trust the USPS to deliver their ballots on time.

Early voting has wrapped up in most states, and state after state has set records for their vote count ahead of Election Day.

Texas surpassed its 2016 vote total even before the weekend. More than 9.6 million people voted during the three-week early voting period that concluded Friday night, beating the state's 9 million turnout in 2016.

Despite massive turnout levels across the country, there are still millions of mail ballots in the key battleground states that were requested by voters but haven't been returned, according to the latest data from Edison Research. Some of largest pools of unreturned ballots are in Ohio and Georgia. In other states like Iowa, almost all requested ballots have already been returned.

But people who requested mail-in ballots may have instead cast a ballot during in-person early voting windows, or their ballot might still be moving through the US Postal Service, which has seen some delays this week.

In most states, information about unreturned ballots is public information, and is mined by political campaigns. Campaigns use this data to aggressively target their supporters, during the final stretch of the race, to cast their vote. At this point, people with mail ballots should either use an official dropbox, hand-deliver them to election offices, or go to the polls on Election Day.

Despite the early voting totals, rising Covid-19 cases in nearly every state heading into Election Day is a worrisome trend for election officials.

In Michigan, for instance, the state hit a new high for positive Covid-19 cases this weekend, with 3,792 new cases reported on Saturday. The state is looking to recruit extra poll workers who can fill in if there are cancellations on Election Day.

"We are now focused on building a reserve pool of 1,500 workers who can be deployed across the state on Election Day in the event there are any last-minute worker changes or shortages," Michigan Secretary of State spokesperson Tracy Wimmer told CNN on Friday.

In Kent County, which includes Grand Rapids, county elections director Gerrid Uzarski told CNN last week that "some" poll workers were quarantining after being exposed to Covid-19, and would no longer be working on Election Day. On top of those quarantining, Uzarski added that "some" other poll workers have decided that they do not want to risk coming into work on Election Day because of the rising cases across the state.

The City Clerk of Fredonia Township, which is a small township in Calhoun County located southwest of the city of Marshall, said last week three of her election inspectors are in quarantine after being exposed to Covid-19, and one has since tested positive. Despite the three workers in quarantine, Clerk Cathy Combs said she is not worried about not having enough staff on Election Day.

"I think people are stepping up to the plate" Combs told CNN. "In fact, I had someone come in today, that would like to get trained and work."