Early takeaways from election night as votes are still being counted 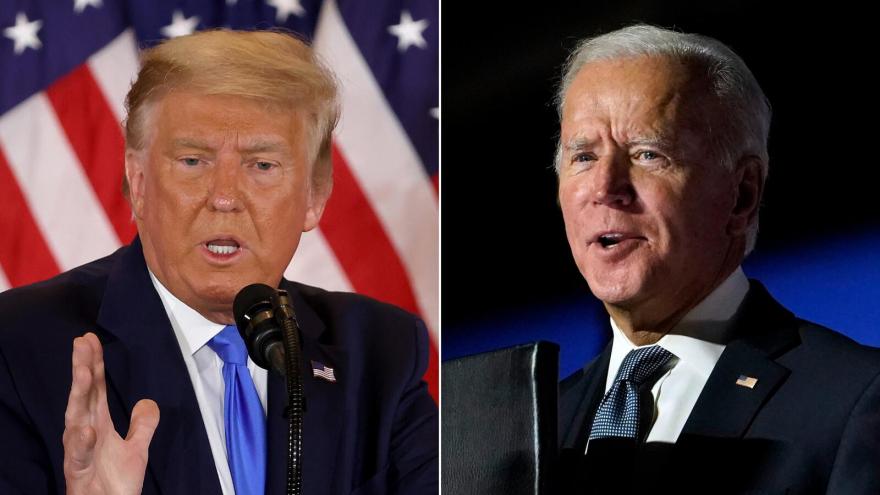 Several battleground states are still counting votes, and the presidency and control of the Senate remain within either party's reach.

(CNN) -- President Donald Trump and Democratic nominee Joe Biden are still locked in a tight race for the 270 electoral votes needed to win the presidency.

Several battleground states are still counting votes, and the presidency and control of the Senate remain within either party's reach.

As of Wednesday morning, CNN had not projected winners in Arizona, Georgia, Michigan, Nevada, North Carolina or Pennsylvania. Alaska was also too early to call. According to CNN's projections, Biden has won 237 electoral votes to Trump's 213.

With many votes left to count, here are six takeaways from the 2020 election so far:

As Wednesday afternoon, Biden had reason to be optimistic: He held narrow leads in enough states to finish with exactly 270 electoral votes if he were to remain ahead, with other possible additions still in play.

Biden on Wednesday won Wisconsin and Michigan, according to CNN projections. He was also narrowly ahead in Arizona and Nevada.

It's not clear whether those leads, which would put Biden at the 270 electoral votes he needs to win the presidency, will hold. The good news for Biden, though: Votes remaining to be counted in most places were mail-in ballots -- the form of voting in which Biden generally performed strongest across the map -- and in areas where Biden expects an advantage. Trump's strength was in-person voting on Election Day, most of which has now been counted.

Nebraska and Maine divide their electoral votes up by congressional district. While Trump easily won Nebraska overall, he lost the Omaha-based 2nd District -- and if Biden reaches 270 electoral votes, that single electoral vote could prove decisive.

If candidates' current leads all hold, Biden would reach exactly 270 electoral votes -- a path to the presidency that wouldn't be possible without Nebraska's 2nd District.

In the wee hours of Wednesday morning, Trump called for legitimate vote-counting to be halted, declaring victory with millions of votes outstanding in several swing states and falsely claiming that Democrats were trying to "steal the election."

The moment was a chilling threat to democracy. But Trump's declaration bears no impact on states' vote counts, with many resuming processing absentee ballots later Wednesday morning. The mail-in ballot counting went slowly in Michigan, Pennsylvania and Wisconsin in part because Republican-led legislatures in those states opposed changes made in other states to speed up the processing of those ballots.

Biden spoke to supporters earlier Wednesday morning in Delaware, telling them that "we believe we're on track to win this election."

Despite record-shattering fundraising numbers across the map, Democrats' hopes of a net gain of three seats if Biden wins, or four if Trump wins, to give them a Senate majority were slipping. Those hopes could now depend on Georgia, where at least one and potentially two Senate races are headed to runoffs. Results in North Carolina -- a top Democratic target -- remain outstanding.

Many races were left to be decided as of Wednesday morning, but Republicans had ousted a few Democratic House members while defending some seats in key districts, potentially shrinking a Democratic majority that was widely expected to grow.

Trumpism is here to stay

The fate of Trump's re-election bid has not yet been decided. But Tuesday's results were not the large-scale repudiation that would carry Biden to a landslide victory and force Republicans to re-evaluate their party's approach.

Democrats' effort to put three states Trump won handily in 2016 -- Iowa, Ohio and Texas -- fell flat. Florida continued to flummox the party. Republicans, meanwhile, were on track to pick up House seats, and fended off a number of serious Senate challenges

Georgia and Arizona appear more competitive than they were in 2016. And it's not yet clear whether Biden has fully rebuilt the "blue wall" of Wisconsin, Michigan and Pennsylvania, with the latter still counting votes. But 2020 did not bring anything close to a remaking of the electoral map.

For months, Democratic organizers and operatives warned that the party was at risk of a poor performance in Florida's heavily Cuban Miami-Dade County, and that it hadn't been reaching nearly enough Latinos in the Rio Grande Valley to turn Texas into a battleground.

Those fears proved to be founded, as Biden fell well short of Hillary Clinton's 2016 performance in those areas.

Latinos are not a monolith, and the politics of Cubans in Miami, Puerto Ricans in Orlando and Mexicans in South Texas can vary widely. But after falling short of expectations in several key areas -- and doing so against a President who has treated immigrants harshly and mismanaged a pandemic that was disproportionately deadly for Latinos -- Democrats must now face hard truths about their shrinking margins with a fast-growing segment of the electorate.

This story has been updated with additional reporting and results.