Dying man to Congress: GoFundMe is not a health care plan 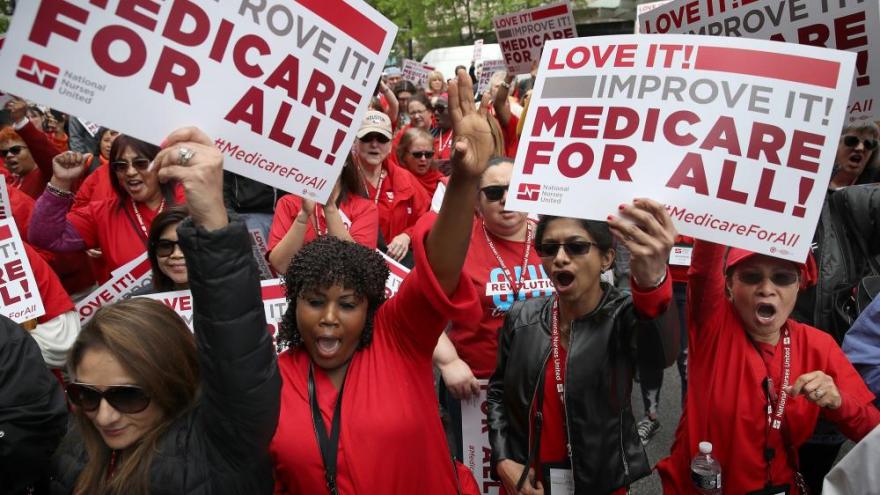 House Democrats came into power this past winter divided on how to deal with an emerging groundswell of public support behind "Medicare for All" plans, and almost five months in, the answer, at least for some, is clear: Embrace it.

(CNN) -- House Democrats came into power this past winter divided on how to deal with an emerging groundswell of public support behind "Medicare for All" plans, and almost five months in, the answer, at least for some, is clear: Embrace it.

At a first hearing Tuesday, they invited high-profile health care activist Ady Barkan, a 35-year-old father who is confined to a motorized wheelchair by ALS, to testify on the Medicare for All bill introduced recently by Reps. Pramila Jayapal and Debbie Dingell.

Speaking through a voice synthesizer, Barkan challenged Democrats who support making incremental changes to Obamacare to back swift and drastic action instead.

"Some people argue that although Medicare for All is a great idea, we need to move slowly to get there," he said. "But I needed Medicare for All yesterday. Millions of people need it today. The time to pass this law is now."

"The ugly truth is this: Health care is not treated as a human right in the United States of America. This fact is outrageous. And it is far past time that we change it," Barkan told the committee, using software that tracks his eye movements and converts text into speech.

Barkan's testimony was designed to cut through debate about the hefty price tag and political tradeoffs attached to creating a government-run health program.

The hearing itself was initially set to be more mundane and limited in scope until Democratic Rep. Jim McGovern of Massachusetts, chair of the House Rules Committee, invited Barkan, who founded the Be a Hero PAC.

"Congress should be a place where we tackle big things," McGovern said. "I know we won't pass this bill overnight, but we won't pass it if we don't start the dialogue."

Republicans took issue with Democrats' decision to hold the hearing in the Rules Committee, when other committees like Ways and Means and Energy and Commerce have greater jurisdiction of the contents of the bill.

The top Republican on the committee, Rep. Tom Cole of Oklahoma, called Jayapal's plan "a socialist proposal that threatens freedom," and criticized the bill's provision allowing federal funding to pay for abortions, which is banned under current law.

"What Democrats are proposing today would completely change America's health care system, and not in my view, for the better," Cole said.

The most notable moments in the hearing came when Barkan discussed his own encounters with the health care system and his ALS diagnosis. Barkan said his medical expenses run about $9,000 per month and are not covered by insurance. He has raised money to cover his costs through GoFundMe.

"We should instead have a rational, fair, comprehensive social safety net that actually catches us when we fall," he said.

Barkan documented his journey to Washington over the weekend on Twitter, detailing his passage through security with his mechanized wheelchair, and rallied with fellow progressives from the Center for Popular Democracy on Monday outside the headquarters of Pharmaceutical Research and Manufacturers of America (PhRMA), a major pharmaceutical lobby.

Barkan also met with Sen. Bernie Sanders, a Vermont independent and Democratic presidential candidate who has introduced his own version of Medicare for All legislation in the Senate.

Barkan's testimony will represent a sharp break from the position taken by Democratic leaders such as House Speaker Nancy Pelosi, who has argued for focusing on reinforcing Obamacare instead of overhauling the nation's health care system as the Affordable Care Act comes under legal assault by President Donald Trump's administration.

Barkan, who is dying of ALS, was added as a witness amid complaints first reported by HuffPost that the original witness list did not include strong proponents of Medicare for All.

"Ady Barkan has been fighting for many of the principles this Majority believes in for a long time, including the notion that health care is a right and not a privilege," McGovern said in a press release announcing the change last week. "His extraordinary advocacy since his diagnosis has been an inspiration to so many Americans."

Medicare for All legislation was introduced earlier this year in the House by Jayapal of Washington state and Dingell of Michigan. It would roll out the single-payer system over two years, as opposed to the four-year transition envisioned in a similar plan laid out by Sanders.

Jayapal's legislation does not include details on how to pay for the sweeping proposal. A CBO analysis of single-payer legislation is expected Wednesday.

The House proposal would sunset Medicare and Medicaid but would keep the Indian Health Service and the Department of Veterans Affairs health care system intact.

The single-payer debate has highlighted divides within the Democratic conference. Most freshmen Democrats, many of whom were elected in competitive districts, have not been willing to sign on to the proposal.

"How are we going to pay for it?" Democratic Rep. Lauren Underwood of Illinois asked of Medicare for All in a February interview with CNN. "What happens with private insurance? What happens to all types of coverage?"

Underwood has argued for shoring up the Affordable Care Act instead, a strategy that supporters say is more likely to result in legislation passing through a divided Congress.

Proponents of Medicare for All, such as California Nurses Association board member Sandy Reding, argue that an incremental approach isn't adequate.

"Obamacare was a step in the right direction, but the only thing that's going to cure what ails our health care system right now is Medicare for All," she told CNN at the Monday afternoon rally. "Not incremental changes, not other options. We have to make sure that profits don't continue to be put over people, because capitalizing on the sick and injured is horrible."