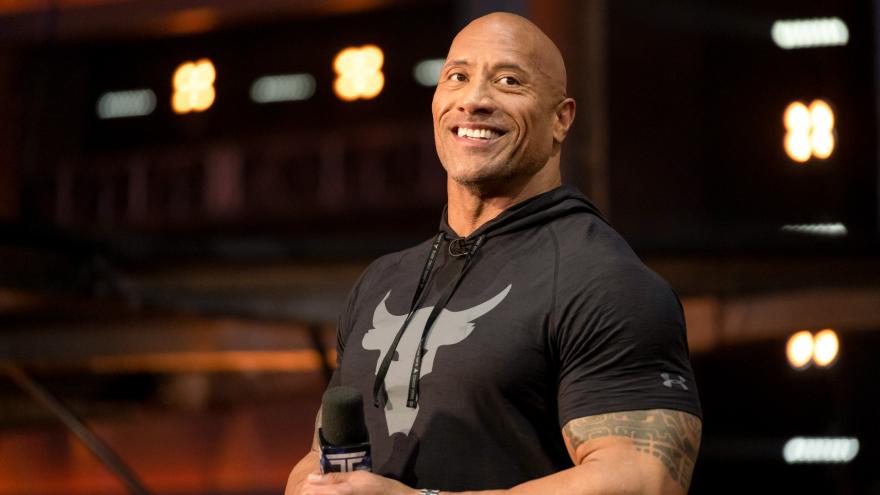 (CNN) -- Dwayne "The Rock" Johnson is teaming up with his ex-wife and a top sports management company to buy the bankrupt XFL football league for $15 million.

Johnson -- a former WWE wrestling star who has since become one of Hollywood's most bankable action heroes -- and the partners are purchasing the assets of the XFL from Alpha Entertainment, a private company founded by WWE chairman and CEO Vince McMahon.

Alpha filed for bankruptcy in April after ending the XFL season early because of the Covid-19 pandemic.

It was especially poor timing for the XFL, which was founded as an NFL alternative by WWE (then known as WWF) in 2000. The league played only one season in 2001 -- despite a partnership with co-owner NBC Sports -- and the 2020 season was meant to be its grand return to action.

But even though the XFL didn't score a financial or ratings touchdown back then, some fans have still hoped for a new football league that could challenge the NFL.

That spurred the decision to launch the second iteration of the XFL earlier this year, featuring eight teams, a shorter play clock and new rules designed to both speed up the game and make it safer at a time when the NFL has come under fire for a rash of player concussions.

Johnson's decision to take part in a group to buy the XFL was "rooted deeply in two things - my passion for the game and my desire to always take care of the fans," according to a statement.

He added that he looks forward to "creating something special for the players, fans, and everyone involved for the love of football."

A bankruptcy court still needs to approve the deal at a hearing on August 7. If that happens, the purchase should be completed by the end of the month.

Johnson is partnering with Dany Garcia, a film and movie producer who was married to Johnson for more than 10 years before they divorced in 2007, as well as RedBird Capital, a company founded by former Goldman Sachs partner Gerry Cardinale.

Garcia and Johnson co-founded Seven Bucks Productions and she is listed as a producer of several of Johnson's top hits, including "Jumanji: Welcome to the Jungle and the Jumanji" sequel "The Next Level;" "Rampage," "Fast & Furious Presents: Hobbs and Shaw" and the HBO sports comedy "Ballers." (HBO, like CNN, is owned by AT&T's WarnerMedia unit.)

"Sports and entertainment are the foundations of the businesses I have built," Garcia said in the statement. "Melding our expertise combined with our commitment to deliver exciting and inspiring unique content, has us all focused on developing the XFL brand into a multi-media experience that our athletes, partners and fans will proudly embrace and love."

There was no mention in the press release about when the XFL might return to the gridiron. The NFL is currently still on track to begin its next season this fall, despite concerns about coronavirus.

But whenever the XFL does return, Johnson and Garcia will benefit from working with RedBird, which has significant experience in the world of sports.

RedBird recently filed for an initial public offering of a so-called blank check firm named RedBall Acquisition in order to raise money to buy sports assets and take them public. This special purpose acquisition corporation is co-chaired by Cardinale and Billy Beane, the Oakland A's executive who was played by Brad Pitt in the movie version of the Michael Lewis book "Moneyball."