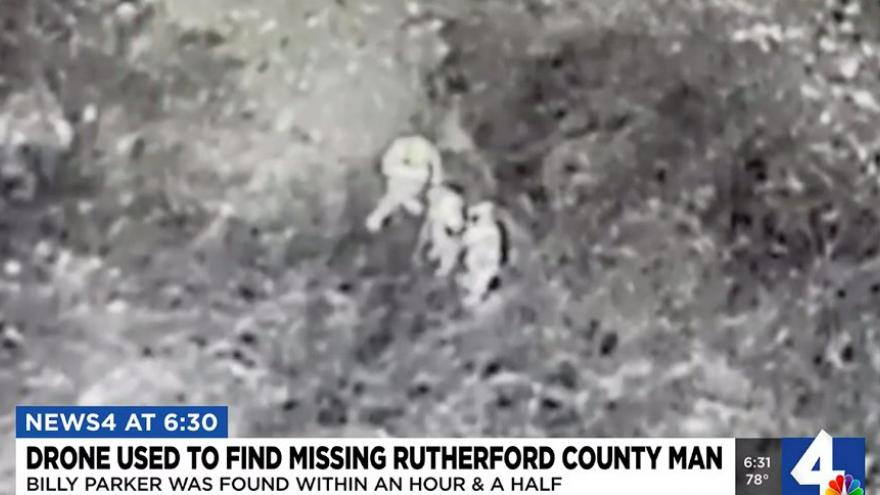 MURFREESBORO, Tennessee (WSMV) -- With the help of drones, an elderly man with health complications was returned quickly to his family by first responders after he went missing Thursday.

“It was about 3:20 in the afternoon. I received a call from dispatch that there is a missing elderly man with some medical problems in the area,” said Corporal George Barrett with Rutherford County Sheriff’s Department.

Barrett said it took about an hour and a half to find Billy Parker once the search started.

The county’s sheriff’s office & the fire department said using the drone in incidents like this saves time and lives.

“Spoke with the wife, and she showed concern that he had been missing for about an hour and a half,” said Corporal Barrett. “Within approximately 20 mins of me arriving on scene, we had our first K9 team on the ground, and it’s was about 10 to 15 mins after that, the first drone team arrived and was able to go ahead and launch,” he added.

Officials said when the drone is in the air, they’re looking for thermal images and heat signatures in areas that aren’t easily seen.

“When we first got there, we launched the drone, and we were able to search all the fields behind the man’s residence. To make sure he wasn’t down there. We searched up and down Highway 231 on Lebanon highway to ensure he wasn’t on the road,” said Fire chief Larry Farley with Rutherford County Fire Rescue. “So we started searching the wooded area, and that’s when; About 20 mins later, they found a heat signature and could zoom in. And based on the description of the clothes and he had a walker, we were able to locate him,” he added.

Fire Chief Farley said it takes the one drone and a few sets of eyes from the Unmanned Aircraft Systems trailer to cover much ground.

“When we launched the drone, we have the pilots able to see the camera. We also have the feed sent back to our trailer here, and so we have 2 or 3 people in there watching the TV screen. And so we’ve actually got my eyes looking for what we’re zooming in on or what we’re searching,” Farley said.

“They’re able to use their other photographic equipment on the drone to search large areas, quick amount of time, and they’re also able to follow the K9 teams,” Barrett said.

News 4′s Tosin Fakile asked why the drone was called in and used.

The fire chief said they work closely with the Rutherford Co. Sheriff’s office, and they’ve been on to several land searches, and they’ve had great success finding people.

A tool that gives a different view on Saving lives.

“That’s one of the main reasons, is using it as a force multiplier. One drone can possibly do the work of 10 people on the ground,” Corporal Barrett said.

“When somebody who is aged or has memory issues or health issues, we locate them a whole lot faster than land search can do,” said Chief Farley.

Officials said Parker, who is in his 60′s, was found about 200 yards from his home in a wooded area.

Fire Chief Farley said they’d had a lot of success with finding people with the drone, and they are willing to offer their drone to help any department in surrounding counties.