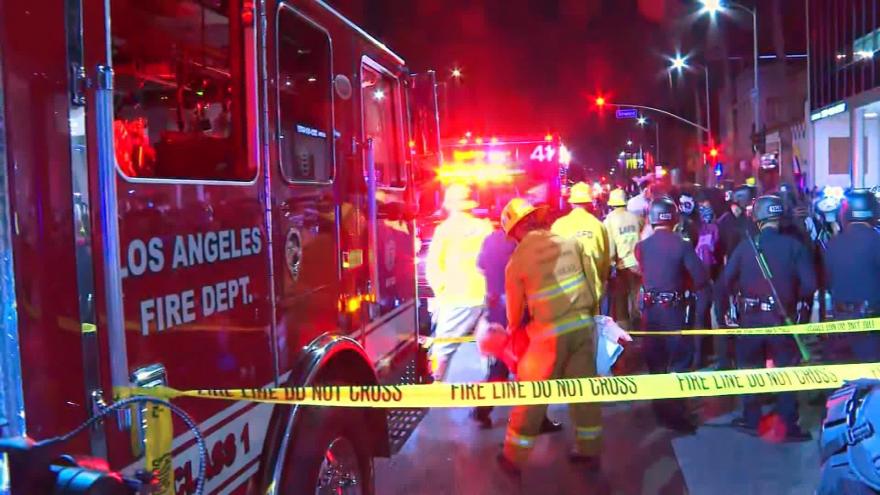 Emergency services respond after a person protesting the death of Breonna Taylor was struck by a vehicle in Los Angeles on September 24. The protester sustained minor injuries, according to police.

(CNN) -- From late May to early September this year, as Black Lives Matter demonstrators took to streets across the US, there were more than 100 incidents of vehicles driving into protesters, according to data collected by a terrorism researcher.

Forty-three of those incidents have been identified as having malicious intent, said Ari Weil, of the University of Chicago's Project on Security and Threats.

Those cases were associated either with extremists, the yelling of slurs, drivers who turned back in an attempt to strike again -- or a second collision with protesters. Thirty-nine of those cases resulted in charges being filed, said Weil.

Both Weil and Brian Jenkins, the director of the National Transportation Security Center at Mineta Transportation Institute, told CNN that the Black Lives Matter movement had been targeted and that online memes appear to have both celebrated -- and driven -- such attacks.

"It might not explicitly say go do this, but it's people joking about it, and it kind of lowers the bar to entry," said Weil.

While it's not clear how many injuries are connected to these rammings, two have been fatal, Weil said.

From May 27 to September 5 this year, there were at least 104 incidents of vehicles driving into protesters, according to data collected by Weil from news reports and court records. It's a phenomenon that is relatively recent and increasing along with political tensions, said Weil.

Five of the cases were clearly not malicious, but instead appear to be accidental, he said. With the exception of two cases identified so far, the majority of malicious incidents involved drivers associated with the far-right, said Weil.

Social media and memes about attacks

The increased number of such incidents stems in part from a higher number of protests putting more people on the streets, Jenkins said.

"On average in the US there are about 6,000 pedestrian deaths caused (annually) by vehicles in our cities and towns across the country. Pedestrians and vehicles are in close proximity, within inches of one another," said Jenkins.

"If you add to that the emotional environment in which this is taking place, then you would say we are going to have even more."

While it's difficult to determine what motivates someone to commit violence, both researchers said they believe that online encouragement is a factor.

Following instances of violence and at the outbreak of protests, people posted memes to social media with phrases like "Black Lives Splatter" and references to protesters as "road bumps," said the researchers.

The contagion effect of seeing these incidents play out, coupled with the environment created by these memes, both provide inspiration for a person to attack, said Jenkins.

Both Weil and Jenkins are continuing to research these incidents. Jenkins said his report on them is scheduled to be released toward the end of October.

Weil said he is hoping to turn his data into a website for public use soon. But as he looks toward the coming election and the heightened rhetoric surrounding it, he said he is concerned the US may see more vehicle attacks.

The image of violence as a crowd in Charlottesville, Virginia, was torn apart by an accelerating driver was seared into national memory in August 2017.

James Fields, the man who drove his car into counter-protestors at a Unite the Right Rally, killing 32-year-old Heather Heyer and injuring dozens, was later sentenced to life in prison for what the US Justice Department called a "hate-inspired act of domestic terrorism."

Vehicle rammings have an established history in terrorist attacks, said Jenkins, but the incidents the US saw this summer aren't necessarily the same kind of act.

What separates many of the instances drivers clashing with protesters on US streets from attacks committed by terror groups is intent, said Jenkins. Cases like those seen in several US cities this summer may or may not have a deadly intent -- whereas the object of a terrorist attack is to kill.

In the context of a street protest, a driver may end up unintentionally in the middle of a crowd of demonstrators blocking a road and become involved in a confrontation even as they try to steer clear of trouble.

In other cases, a driver may be intent on carrying out a premeditated attack, aiming to cause injury or death. Such incidents are often marked by an altercation, flags or bumper stickers indicating motive or swerving maneuvers made precisely in order to hit protesters, Jenkins said.

There are also points in between: What starts as an accidental encounter can take a dangerous turn if, for example, protesters beat on the windows of a vehicle and the driver hits the gas in panic.

On other occasions, a driver may get into a heated exchange and react out of the equivalent of road rage -- or violence may erupt out of an attempt to intimidate, with drivers revving their engine as if to say "I'll show you" to protesters, Jenkins said.