Drivers stopped on an Atlanta interstate to grab $175,000 in cash that fell out of an armored truck. Police want it back 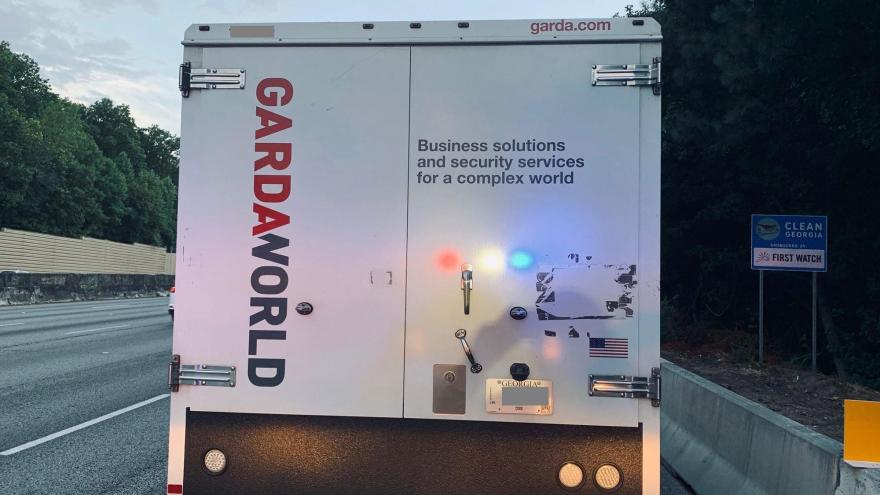 Drivers following this armored truck got lucky when it spilled cash on the highway Tuesday.

(CNN) -- An armored truck's door sprang open Tuesday night on Interstate 285 on the north side of Atlanta, spilling cash across the highway.

While the truck was making it rain, drivers pulled over to join in a literal cash grab.

Those driving past got out their phones and shot video of cars and trucks pulling over, with people jumping out to try to scoop up bills blowing in the wind.

Police responded around 8 p.m. to 911 calls that more than 15 vehicles had stopped on the busy interstate to pick up money that had fallen off an armored vehicle.

"The armored car crew said the side door came open while they were driving and money spilled out onto 285," Dunwoody Police said in a statement. "Officers and the truck crew gathered a few hundred dollars that was still there when officers arrived, but plenty was taken."

It was like a scene from a movie, Uber Eats driver Randrell Lewis said in describing the section of I-285 where he was driving when money littered the highway.

Lewis first thought leaves were flying around, he told CNN.

"It took me a minute to realize it wasn't leaves. It was money -- all over the roadway," he said. "It felt like a movie or something out of a video game, not something you would see in real life."

Despite a scenario that might seem like it would spur chaos, it was quite calm as cars pulled over and people got out to pick up money, Lewis said.

The delivery driver walked away with more than $2,000, but he didn't spend any of it, he told CNN.

"I waited until this morning to see if there was a report out, and I saw it on the news," Lewis said, adding that he turned over the money he collected to police.

"I wanted to do what was right and make sure I wasn't doing anything illegal," he said.

It's a crime to keep cash from the truck

The exuberant videos that people posted as the cash danced in the air are now doubling as evidence. Police are checking social media video to find the drivers with sticky fingers, they said.

"We have plenty of social media video, some of which seems to have tag numbers to follow up on, but we really want people to come in, turn in the money and go on about their life without worrying about when the police are coming to find them," said Sgt. Robert Parsons, a spokesman for the Dunwoody Police Department.

Six people had come forward by Wednesday evening to return $4,400 in cash, he said.

"If the money is turned in, we will not criminally charge those who do the right thing," Parsons said.

For those who picked up cash and keep it for themselves, charges could include theft of lost or mislaid property and could be a felony or misdemeanor, depending on the amount, he said.