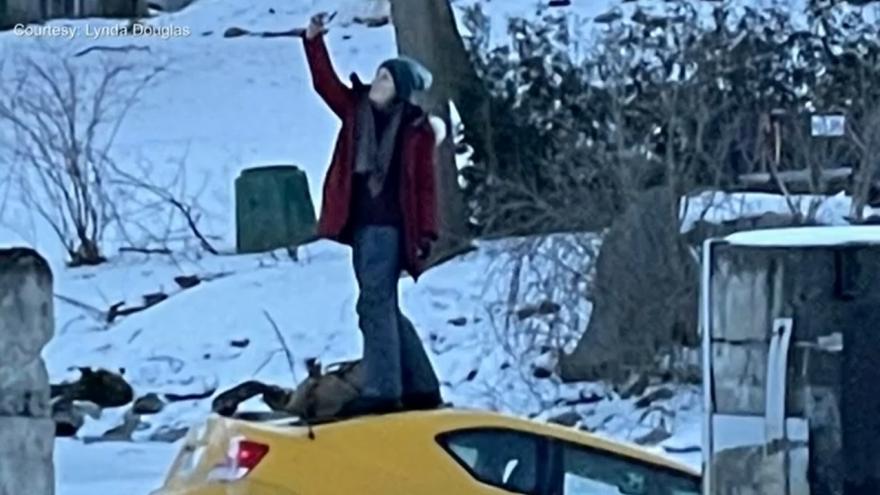 (CNN) -- Residents near Ottawa used a kayak to save a woman whose car plunged into icy water after she drove on a frozen river, police said in a statement.

The residents didn't know why the driver was on the Rideau River on Sunday. People who witnessed the incident posted videos on social media showing the vehicle speeding across the ice.

Lynda Douglas Kurylowicz, who posted a series of photos online -- including one of the driver taking selfies while standing on the sinking car -- told CNN she grabbed her phone after she heard the car driving on the ice.

Kurylowicz said she was in disbelief when she saw the car driving on the frozen river and described the driver's decision to take a selfie during the ordeal as "cavalier."

Shortly afterward, Kurylowicz called 911 when she heard the ice crack and saw the car start to sink.

"While I was on the phone with 911, people were getting ropes and things to try and help her (the driver)," Kurylowicz said.

The driver started climbing out of the car while two men ran to get a kayak, which they tied a rope to. Then, standing on the ice before the open water, the men flung the kayak into the river and pulled the driver to safety, Kurylowicz added.

Ottawa police said the driver, who was not injured during the incident, was charged with one count of dangerous operation of a motor vehicle.

Police said the vehicle was still in the river and warned people not to venture out on the ice to catch a glimpse of it.

"Another reminder that 'No Ice Is Safe Ice'. Please use extreme caution this winter season!" police said.