Dragonflies are losing their wing color because of climate change, study shows 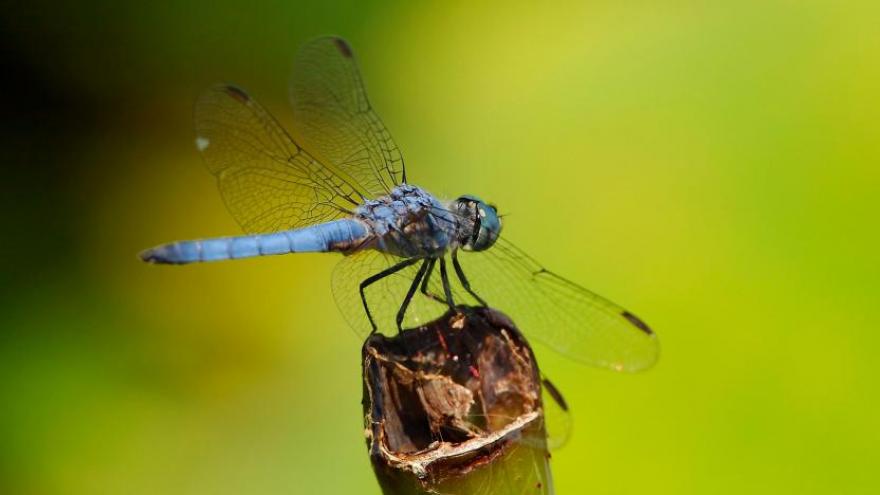 Researchers worry that female dragonflies may no longer recognize their male counterparts.

(CNN) -- As the planet warms, a study found that male dragonflies are losing a crucial feature they typically use to attract female mates: the ornate black patterns on their wings.

The new research published in the journal Proceedings of the National Academy of Sciences found that male dragonflies are adapting to a warming climate by shedding more of their darker wing patterns.

Researchers worry that female species may no longer recognize their male counterparts without their intricate wing patterns and, thus, won't be able to reproduce as temperatures get hotter.

"Our research shows that males and females of these dragonfly species are going to shift in pretty different ways as the climate changes," Michael Moore, lead author of the study and an evolutionary biologist at Washington University in St. Louis, told CNN. "These changes are going to happen likely on a much faster timescale than the evolutionary changes in these species have ever occurred before."

Moore and his colleagues analyzed a database of more than 300 dragonfly species across the US, Canada and northern Mexico, and cross-referenced the wing colors of roughly 2,700 individual dragonflies from different species across different locations and climate.

A darker wing coloration is a crucial mating trait for male dragonflies, enticing female mates. But just as dark roads absorb the sun's heat, dark wing pigments increase the dragonflies' body temperatures by up to 2 degrees Celsius, damaging their wing tissue, overheating them and reducing their defense abilities -- all of which pose deadly ramifications for the insects.

Moore likens it to wearing black clothing on a sunny, hot day: it's going to make you feel hotter.

"We don't yet know what's driving these evolutionary changes in female wing coloration," he said. "But one of the very important things that this indicates is that we shouldn't assume that males and females are going to respond to climatic conditions in exactly the same way."

The disparate evolution between the two, researchers say, pose challenges when it comes to mating or breeding.

In a 14-year period, from 2005 to 2019, Moore and his colleagues analyzed which dragonflies make it to the breeding stages and discovered that natural selection has prevented ornamented male dragonflies from breeding in warmer years, compared to cooler years.

The study's climate projections also show that changes in dragonfly wing coloration will be a crucial aspect in seeing how the species would respond to warming temperatures over the next 50 years, predicting more decreases by 2070.

It's not just dragonflies, according Scott Black, executive director of the Xerces Society, a nonprofit conservation group that protects insect habitats.

"This is evolution and adaptation in real time, but will they be able to adapt quickly enough?" Black, who is not involved with the study, told CNN. "The climate crisis is happening at a speed that is really unprecedented in human history. It's all of these animals potentially adapting to be able to move to a climate or habitats that are able to support them."

Black also said that adaptation alone will not help these species if they do not have enough water, in which their nymphs depend on to grow to adulthood. With large parts of the Western US facing record-breaking heat waves and drought while much of the Northeast region are under heat advisories, it's clear that historic temperatures and climate impacts are taking a toll on various species and ecosystems including dragonflies.

"We must work on nature-based climate solutions, including wetland protection and restoration, to maintain this important biodiversity," Black said. "Dragonflies are very important because they eat insects like mosquitoes so this is not just about dragonflies but disrupting the entire ecosystem."

Meanwhile, Moore adds that climate and land management policies shouldn't just focus on how species will survive, but also how they can continue to mate and reproduce to create a lasting population as climate change shifts habitats and ecosystems.

"What our research shows strongly is that as we make these recommendations to folks who work on policy and land management," he said, "we need to make sure that they understand that these organisms also need reproduce and not just survive."