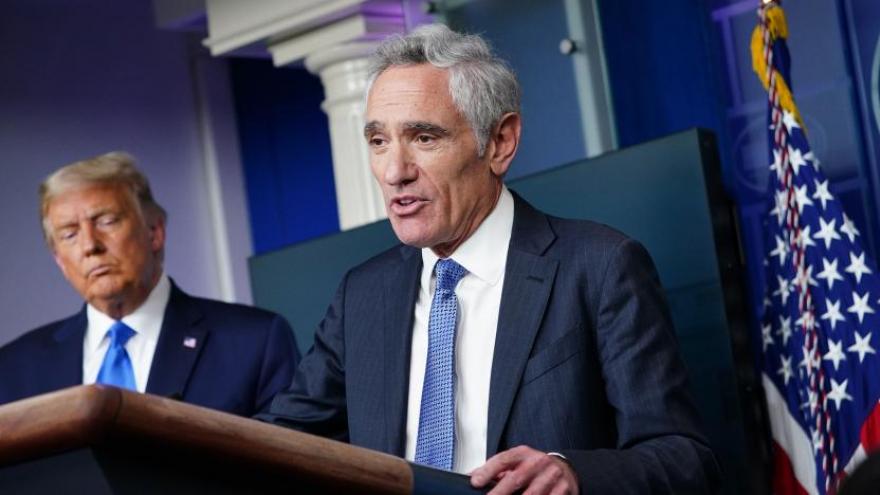 Dr. Scott Atlas, a highly controversial member of the White House's coronavirus task force, has resigned from his post in the Trump administration, according to a person who works with the task force.

(CNN) -- Dr. Scott Atlas, a highly controversial member of the White House's coronavirus task force, has resigned from his post in the Trump administration.

A source familiar with what happened told CNN that Atlas turned in his resignation letter to President Donald Trump on Monday. As a special government employee, Atlas had a 130-day window in which he could serve and that window was technically coming to a close this week.

Atlas tweeted out a photo of his resignation letter later Monday. In the letter, he said his "advice was always focused on minimizing all the harms from both the pandemic and the structural policies themselves, especially to the working class and the poor."

"I sincerely wish the new team all the best as they guide the nation through these trying, polarized times," he wrote, apparently referring to President-elect Joe Biden's incoming coronavirus team.

Atlas will return to his role as a senior fellow at Stanford University's Hoover Institution next month, a person familiar with the matter told CNN on Tuesday. Stanford had issued a statement in mid-November that said the doctor's views on managing the pandemic were "inconsistent" with those of the school.

Atlas appeared on Fox News on Monday to celebrate comments from New York's Democratic governor and Dr. Anthony Fauci about reopening schools in the state, just moments after his departure was announced.

He did not comment on his resignation and was not asked about it by Fox's Tucker Carlson, who described it as being "in a normal course of events."

The White House did not immediately respond to a request for comment.

Atlas' months-long stint in the White House was marked by controversy as he became a close adviser to Trump on the pandemic, adopting public stances on the virus much closer to the President's -- including decrying the idea that schools cannot reopen this fall as "hysteria" and pushing for the resumption of college sports.

In one extraordinary episode in October, Twitter removed a tweet from Atlas that sought to undermine the importance of face masks because it was in violation of the platform's Covid-19 Misleading Information Policy, according to a spokesman for the company.

And earlier this month, he criticized coronavirus restrictions in Michigan, urging residents in the state to "rise up" against the measures. The comments came weeks after officials thwarted an alleged domestic terrorism kidnapping plot against Democratic Gov. Gretchen Whitmer, who herself has been the subject of harsh criticism from the President and other Republicans amid the pandemic.

Following those remarks, Stanford University distanced itself from Atlas. A group of faculty members at the university celebrated his resignation from the Trump administration on Monday, saying in a statement that it's "long overdue and underscores the triumph of science and truth over falsehoods and misinformation."

"His actions have undermined and threatened public health even as countless lives have been lost to Covid-19," the faculty wrote.

Atlas was not on a call Vice President Mike Pence held on Monday with state leaders, according to a list of participants. During the call, Pence and members of the task force focused on vaccine safety and distribution as Covid-19 cases skyrocket across the country, according to his office.