Dr. Fauci says US should have had better coronavirus vaccine rollout 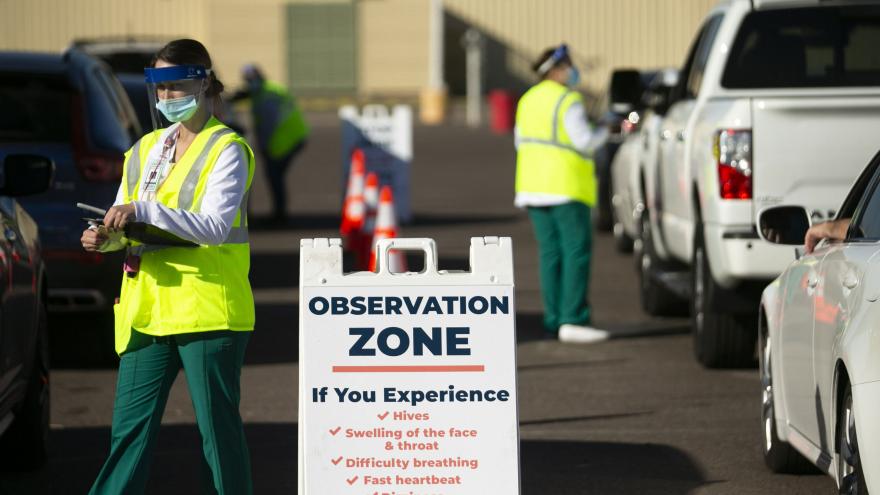 (CNN) -- The United States could and should have done a better job of rolling out coronavirus vaccines, Dr. Anthony Fauci, the nation's top infectious disease expert, said Wednesday.

"Clearly, no excuses. We should have gotten 20 distributed, and 20 into the arms of people -- by 20, I mean 20 million," Fauci, the longtime director of the National Institute of Allergy and Infectious Diseases, told the Economic Club of Washington.

"I think we have to wait for the first couple of weeks in January to make any determination as to what's gone wrong, if anything," Fauci said.

He said that some of the delays may be because the Covid-19 vaccination program is new and has never been tried before, and it was also difficult to start something in the middle of the holiday season.

"Again, no excuses, but you can explain why you may not have gotten to the level you want. Now, not to make excuses, we should have done better. So, let me make that clear," Fauci said. "We should have done better, but I think we should wait until we get into maybe the second, or the third week in January, to see if we can now catch up with the original pace that was set."

Health and Human Services Secretary Alex Azar blamed the holiday season for slowing the rollout of vaccines across the United States.

"So while we continue to ship, you do have just the natural human behavioral element of the holiday season there in terms of hospitals, pharmacies and other health care providers being able to line up individuals for vaccination," Azar said. "That's also a normal a normal consequence."

Azar also blamed state leaders for strictly following guidelines from the Centers for Disease Control and Prevention, which recommended giving the first doses of vaccine to frontline healthcare workers and residents of long-term care facilities.

"I have encouraged our governors, and I will continue to do so, that if they are using all of the vaccine that is ordered -- that is allocated, ordered, distributed, shipped -- and they're getting it into health care providers arms, every bit of it, that's great," Azar said.

"But if for some reason their distribution is struggling, and they're having vaccines sit in freezers, then by all means you ought to be opening up to people 70 and over, 65 and over, you ought to be making sure that the nursing home patients are getting vaccinated."

The US reported its highest daily Covid-19 death count ever Tuesday -- a grim milestone that comes as state leaders work urgently to combat a slow pace of vaccinations.

More than 3,770 American deaths were reported in one day -- more than two dozen above the country's previous record, set less than a week ago. The country also topped 21 million infections Tuesday and set a hospitalization record, with more than 131,100 Covid-19 hospitalized patients nationwide, according to the Covid Tracking Project.

As numbers climb, governors are now taking new measures to get the distributed vaccines into arms faster, including mobilizing National Guard members and training more volunteers to administer vaccines.

The federal government's Operation Warp Speed said it distributed more than 3 million vaccines on Tuesday -- bringing the US total of distributed vaccines to more than 19 million. Earlier Tuesday, Centers for Disease Control and Prevention data showed 17 million doses had been distributed and more than 4.8 million had been administered.

That means only about 28% of the distributed doses have been administered.

In California -- a state that's been ravaged by the virus -- just 27% of the vaccines distributed have made it into arms. The problem in some places: not enough people to give the vaccine.

"Everyone is scrambling to get as many vaccinators as possible while every staff member is needed to assist with the surge," Los Angeles County Public Health Director Barbara Ferrer said Tuesday.

California Gov. Gavin Newsom promised "aggressive action" to accelerate the process, including granting a waiver that will allow dentists to administer the vaccine after undergoing training.

Arizona National Guard members, meanwhile, have been "conducting refresher training to the first wave of Arizona residents who have volunteers to support vaccination sites statewide."

But vaccination efforts are not all that local and state leaders are worried about. After a holiday season during which millions of Americans traveled -- despite experts' advice -- some officials now report alarming trends.

"We're at three times the hospitalizations we saw in November and almost seven times where we were in October," Dr. Bruce Vanderhoff, the chief medical officer for Ohio's health department, said Tuesday. "Our ICU beds are also very busy. In fact, our ICUs are caring for over 1,000 patients and more than a quarter of our ICU beds are filled with Covid care."

In California, Los Angeles County health officials said Tuesday there have been more than 1,000 new Covid-19 deaths in less than a week.

"While vaccines are a powerful tool, we do not need to wait for vaccines to stop new COVID-19 cases, hospitalizations and death. We can do that now," Ferrer, the county's health director, said in a statement. "It takes every business and every resident to purposefully follow public health directives and safety measures. Please stay home and leave only for essential work or essential services."

There are more than 7,800 people hospitalized with Covid-19 across the county, officials said -- 21% of whom are in the ICU.

In Georgia, about one in 15 residents has been infected with the virus, and more than one in 1,000 has died, according to Johns Hopkins University data.

About 91% of ICU beds across the state are occupied and 85% of all inpatient beds are occupied, according to estimates published by the Department of Health and Human Services.

Arizona health officials, meanwhile, reported just 8% of all ICU beds were available Monday. About 62% of people in the ICU are Covid-19 patients and 57% of the state's available ventilators are in use, according to the state's Covid-19 dashboard.