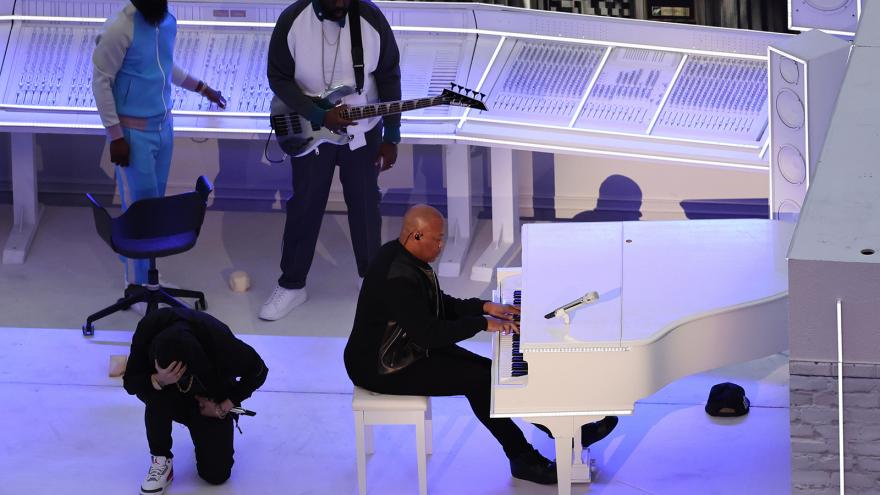 (CNN) -- It was all good in the hood during the Super Bowl halftime show, according to Dr. Dre.

The uber producer, who performed along with Eminem, Snoop Dogg, Mary J. Blige and Kendrick Lamar on Sunday, told TMZ there was no problem with Eminem taking a knee during the show.

The gesture was made famous by former NFL quarterback Colin Kaepernick as an act of protest against police brutality and racial discrimination and there had been a report that the NFL requested that Eminem not do it.

"Em taking a knee that was Em doing that on his own," Dr. Dre said of his protegee. "And there was no problem with that."

In a statement to CNN on Sunday, the NFL said they had no issue with the rapper kneeling.

"We watched all elements of the show during multiple rehearsals this week and were aware that Eminem was going to do that," the statement read. "A player or coach could have taken a knee and there would have been no repercussions so there was no reason to tell an artist she or he could not do so."

Dr. Dre told TMZ there were minor changes made by the NFL, including removing a reference to gangs in one of Lamar's songs, which Dre said was "no big deal."

"All in all we came in, everybody was professional, everybody was on time," he said. "Everybody really felt the magnitude of what this thing was and what we were going to be able to accomplish. It was a fantastic experience."

It marked the first time hip-hop artists were the featured performers for NFL's biggest night.