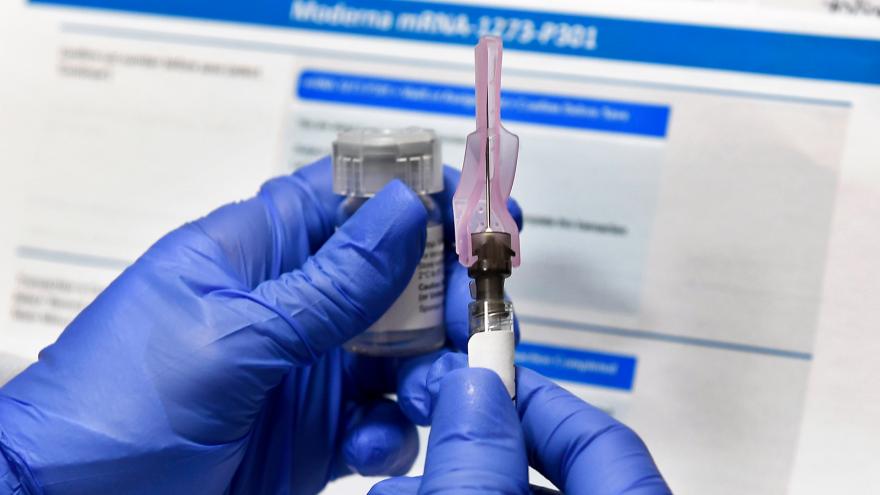 (CNN) -- The high number of holiday travelers during the pandemic has the nation's top infectious disease expert worried.

"I know everyone wants to get back to the time when Christmas was a situation where you could have many, many guests indoors, congregating, having fun together," Dr. Anthony Fauci, the long-time director of the National Institute of Allergy and Infectious Diseases, told CNN's Wolf Blitzer on Tuesday.

But, "the situation is different now," he said.

The Transportation Security Administration is reporting record-high pandemic travel, and said that it screened more than 4 million air travelers between Friday and Monday.

If Americans disregard the dire situation already underway and travel for the holidays anyway, Fauci warned that it "could be a very difficult January."

"As you might imagine, it's quite concerning to me," he said. "This type of travel is risky, particularly if people start congregating when they get to their destination in large crowds, in indoor settings. I'm afraid that if, in fact, we see this happen, we will have a surge that's superimposed upon the difficult situation we are already in. So, it could be a very difficult January coming up if these things happen."

Fauci said whenever he talks about being careful as the coronavirus pandemic rages across the country, he's accused of wanting to "cancel Christmas."

"I don't want to do that," he said. "I want people to be more careful. I want them to limit traveling to the extent possible."

Fauci also urged Americans to get the vaccine -- he received his first dose of Moderna's Covid-19 vaccine Tuesday.

"I feel very confident about what we're doing and that's the reason why I strongly recommend to everybody and everyone that when the vaccine becomes available to them to get vaccinated," he said. "That is how we're going to put this pandemic behind us."

Pfizer and Moderna are testing their coronavirus vaccines to see if they work against the mutated version of the virus found in the United Kingdom and other countries, the companies said.

Travel between the US and UK, along with the high prevalence of the variant in UK infections, increases "the likelihood of importation," the CDC said.

"We expect that the Moderna vaccine-induced immunity would be protective against the variants recently described in the UK; we will be performing additional tests in the coming weeks," Moderna said.

Pfizer is "generating data," it said, on how well blood samples from immunized people "may be able to neutralize the new strain."

Dr. Ashish Jha, the Dean of the Brown University School of Public Health, told CNN that he expects the two authorized vaccines will work against the new strain.

"We're starting to see some data that some of the monoclonal antibodies we have continue to work against this new strain. So I do expect that the vaccines will continue to be effective," he said. "And if on the outside chance that (they aren't) ... we can make changes to the vaccine.

"But I don't think that's going to be necessary. Certainly not in the short to medium run."

US has not restricted UK travelers

The novel coronavirus has mutated before, and both companies' vaccines worked against variations of the virus.

The importance of this mutation is uncertain, experts say, yet dozens of countries, including Canada, have imposed restrictions on UK travelers. The United States has not, but the White House is considering requiring travelers from the UK to present a negative coronavirus test before entering the US, two administration officials told CNN.

The outbreaks are not confined to one region. As of Monday evening, the states with the most new cases over the past week, adjusted for population, are Oklahoma, Tennessee, Texas, California and Rhode Island, according to CDC data.

More than 614,000 doses of the vaccine have been administered, the CDC says. Tens of millions more are expected in coming months.

However, vaccine distribution should not cause Americans to drop their guards. Everyone should take precautions to limit exposure, as research published Tuesday in the journal, Physics of Fluid, warns mask-wearing without social distancing may not suffice.

Across the country, some state leaders are having to impose stricter health orders as communities deal with the latest surge in coronavirus cases.

Beginning Saturday, businesses in "most industries" will need to limit their capacity to 25%, Baker said, calling the decision to institute the measures "enormously difficult."

Baker announced that the state had 3,760 new cases and 1,991 people were hospitalized, putting facilities "under significant pressure."

Mississippi Gov. Tate Reeves signed an executive order extending rules on face coverings. With the addition on 17 counties, all but four of 82 counties are under the directive, which expires January 15.

"We all need to be extra aware," Reeves said in a news release. "You know what to do! Protect yourself and your family."

California, which divides the state into five regions, will likely extend its stay-at-home orders that are set to expire in two regions next week, Gov. Gavin Newsom said Monday.

Officials announced Tuesday more than 32,000 Californians have been newly diagnosed, bringing the state's total to more than 1.9 million. Fatalities continue to climb, as the state added 247 deaths on Tuesday for a total of 22,923.

The lack of ICU beds in Southern California and the San Joaquin Valley continues to plague both regions as capacity remains at 0%. Almost 19,000 Covid-19 patients are hospitalized in California, with 3,861 in intensive care units.

"California is in a crisis mode in its health systems," Thomas McGinn, Executive Vice President of Dignity Health, said in a joint news conference. "We're breaking records that we do not want to break. Number of admissions for COVID, number of patients on ventilators, number of patients in our ICUs and sadly, the number of mortality that we're witnessing."

But cases are dropping in many states. On Monday the governor of North Dakota announced the relaxing of orders for the hours of operation of restaurants and bars. Starting Tuesday, places that had been closed to in-person service between 10 p.m. and 4 a.m. were allowed to return to normal hours, Gov. Doug Burgum said.

"These businesses are an important part of our economy, and we're deeply grateful for their efforts and sacrifices to help slow the spread of Covid-19 and reduce actives cases and hospitalizations," he said.