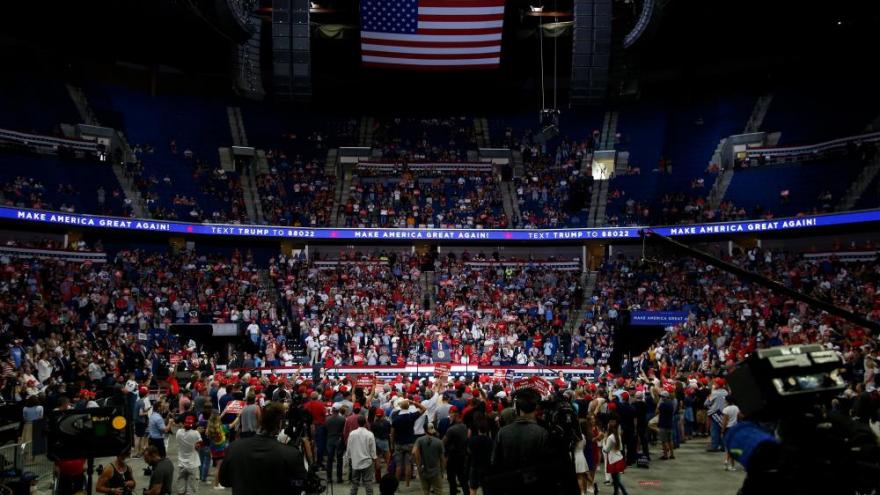 The mass quarantine has led to the decision that Secret Service agents involved with presidential trips must be tested for coronavirus for the next couple of weeks, according to an email sent to agency personnel. The email sent out Wednesday was confirmed by the law enforcement official. Agents must now be tested 24 to48 hours before a presidential trip, the email said. The new testing mandate will be in place until July 4.

The law enforcement official said the number of quarantined agents is on the "low" side of dozens. A Secret Service official said the quarantining will not impact the agency's operations. The news was first reported by The Washington Post.

Asked about the decision to test all agents on presidential trips for coronavirus, the Secret Service official said protecting agency personnel is critical during the Covid-19 pandemic.

"We want to make sure that we have a healthy workforce and that we are protecting our people," the official said. "This is good common sense."

A US Secret Service source who worked advance for Saturday's rally and is now quarantining told CNN that agents from Dallas and Houston worked the event as well, and they had been warned before the trip from those field offices that they would need to quarantine when they got home.

The steps come after two Secret Service agents who attended the rally tested positive for coronavirus, a person familiar with the matter previously told CNN.

"The U.S. Secret Service remains prepared and staffed to fulfill all of the various duties as required. Any implication that the agency is in some way unprepared or incapable of executing our mission would be inaccurate," US Secret Service spokesperson Catherine Milhoan told CNN in a statement Wednesday evening.

Still, news of the quarantined Secret Service staff will heighten scrutiny of the Tulsa rally, which has already been intensely watched after the Trump campaign announced that some advance team staffers who worked on the event had tested positive for the virus.

Attendees at the rally were not required to wear masks or practice social distancing, despite the administration's top public health officials stressing the importance of both measures in preventing the spread of coronavirus.

Several administration officials at the rally did not wear masks, though campaign manager Brad Parscale was seen in one.

Those attending the rally had to agree not to sue the campaign if they contracted coronavirus, acknowledging the "inherent risk of exposure to COVID-19 exists in any public place where people are present."

"By attending the Rally, you and any guests voluntarily assume all risks related to exposure to COVID-19 and agree not to hold Donald J. Trump for President, Inc.; BOK Center; ASM Global; or any of their affiliates, directors, officers, employees, agents, contractors, or volunteers liable for any illness or injury," read the disclaimer to which attendees agreed.

Ultimately, just fewer than 6,200 people attended the rally, according to the Tulsa Fire Department. Plans for an overflow speech were canceled as fewer than 25 people had gathered in the area where it was meant to occur. Trump had once predicted 20,000 people in the arena with an additional 40,000 outside.