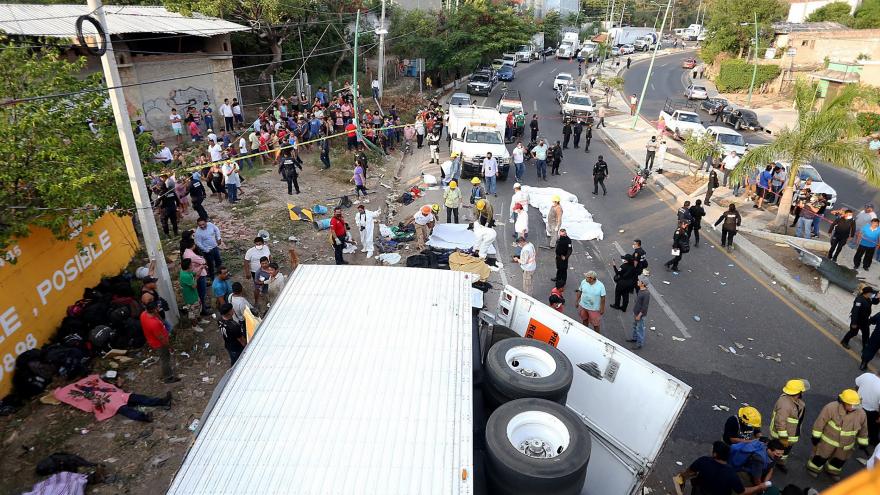 (CNN) -- At least 54 people were killed and more than 100 injured when a truck overturned in southern Mexico on Thursday, with most of the victims believed to be migrants from Central America, according to local authorities.

The incident happened in Mexico's Chiapas state, which borders Guatemala, when the truck carrying dozens of migrants crashed. Photos from the scene show the truck on its side next to a footbridge and bodies laid out on the road wrapped in body bags.

In video footage taken shortly after the accident, people could be seen spilled out on to the road, next to a white trailer that had split open. The vehicle crashed on a tight bend outside the city of Tuxtla Gutierrez, the Chiapas state capital.

Later images showed victims of the crash on a red tarp as people tended to them.

One man, who was in the truck at the time of the accident but escaped uninjured, told CNN that he had traveled from Guatemala. All he remembered was the vehicle overturning and "a lot of dust," he said.

Children, women and men were among the dead, the director of the Chiapas Firefighter Institute, Marco Antonio Sánchez, told CNN. "It was speeding, that's what one of the people we were carrying said to me, and well, unfortunately, this is the result."

State Governor Rutilio Escandón tweeted that in addition to the deaths, 105 people were injured in the crash -- among them 83 men and 22 women.

Three people are still in a serious condition, according to the Attorney General's office.

"My condolences to the victims and affected families. In communication with the State Government and Civil Protection. We make contact with the foreign ministries of the affected countries," Ebrard wrote on Twitter.

"I deeply regret the tragedy caused by the overturning of a trailer in Chiapas carrying Central American migrants," the President said. "It's very painful. I hug the families of the victims."

It is not immediately clear what caused the crash or why the victims were crammed into the truck. However, migration is very common from Central American countries like Honduras, Guatemala, and Nicaragua, where violence, corruption, food insecurity, and a lack of economic opportunity have left many with no other choice.

The dangerous journey, often organized by people smugglers, travels north through Mexico to reach the US border.

In November, Mexican authorities reported finding some 600 migrants hidden in two trailers traveling through the state of Veracruz. The country's National Migration Institute said they discovered 145 women and 455 men in closed box cars that were heading north towards the US border.

On Monday, the Biden administration relaunched the controversial Trump-era border policy known as "Remain in Mexico," kicking back into gear the program that allows officials to send non-Mexican migrants to Mexico to await their US immigration court hearings.

Under the Trump administration, thousands of migrants were subject to the program, formally known as Migrant Protection Protocols, and resided in makeshift camps along Mexico's northern border often in squalor and dangerous conditions.

President Joe Biden pledged to end the program and began the process of admitting those migrants who had previously been subject to it. But a federal judge in Texas disrupted those plans when he ordered the administration to revive the policy.