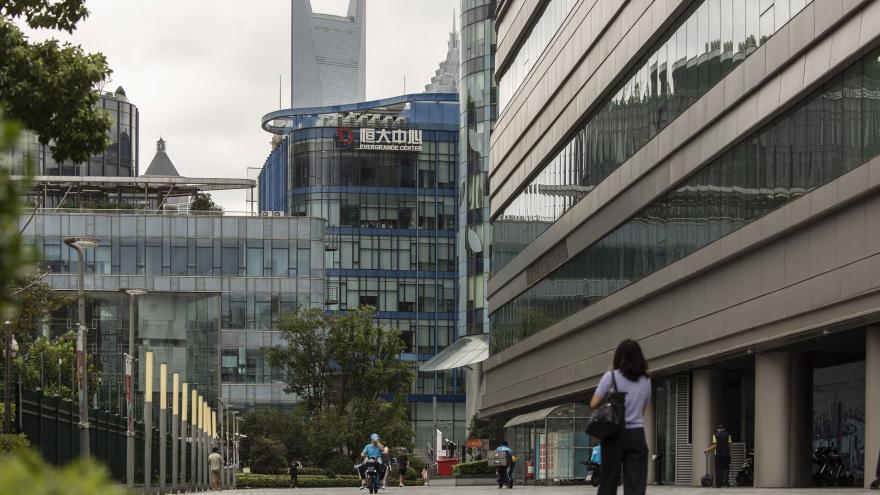 Stocks plummeted at the opening bell. At midday, the S&P 500, the broadest measure of Wall Street, was down 2.2%, while the Dow fell more than 725 points, or 2.1%. The Nasdaq Composite traded a whopping 2.8% lower.

Evergrande, which is struggling to manage its $300 billion mountain of debt, was supposed to pay the interest on some of its bank loans Monday, according to Bloomberg. The company will also have to pay interest on two of its bonds worth more than $100 million later this week, according to Refinitiv.

Shares of Evergrande fell more than 10% in Hong Kong.

Why are global investors so worried about something that's happening in the Far East?

Everything is connected in the world of financial markets and the massive amount of money borrowed by Chinese companies has long been considered a looming threat to market stability. Now investors fear the exposure that banks might have to Evergrande and companies like it.

Adding a dash of melancholy, this crisis comes on the thirteenth anniversary of the collapse of Lehman Brothers.

But in spite of the timing, it's far from certain that Evergrande's crisis will become a similarly systemic event, according to Ryan Detrick, chief market strategist for LPL Financial.

For one, Evergrande has physical assets that could be sold to help settle its debts, Detrick said. He also expects a restructuring — rather than a default — of Evergrande's US dollar-denominated bonds.

"We think the odds do favor the Chinese communist government will get involved should there be a default," Detrick said. "They are holding out as of now, but the fallout could be too great for them to avoid intervening."

Meanwhile,it's not just worries about contagion that are pushing the market lower. US stocks struggled for direction last week and market analysts have long said a correction is needed after the long rally that pushed stocks up to record highs.

"On a down market day, it's easy to look to the nearest headline like Evergrande and attach a cause and effect, but this market has experienced almost no downside volatility for a long time and a pullback was long overdue," said David Bahnsen, chief investment officer at The Bahnsen Group, in a note to clients.

Still the ripples were felt across the market. Bond yields fell as prices rose because investors fled to safety. Bitcoin, another risky asset class, also felt some pain and dropped some 8%.

In the world of commodities, US oil prices fell 2.1%, while gold prices inched up 0.2%.

CNN Business' Laura He contributed to this story.