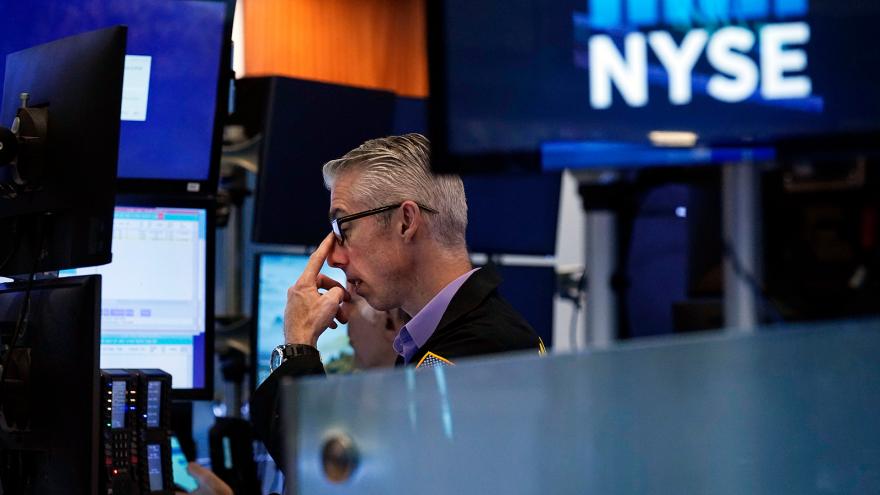 (CNN) -- Investors are getting spooked by the rising numbers of Covid-19 cases as the Delta variant spreads across the globe.

This was the worst day for the Dow since a 943-point drop in late October, and it was the biggest decline this year. But the blue chip market barometer has had several even bigger point plunges since the start of 2020 due to concerns about the Covid-19 pandemic.

The Dow plummeted more than 1,000 points six times last year, with five of those market meltdowns taking place in March at the start of the pandemic in America. The Dow suffered its biggest point slide ever on March 16, 2020, dropping nearly 3,000 points — a 13% freefall.

Investors feared that the Delta coronavirus variant could threaten the US economic recovery. Shares of companies in sectors that were widely thought to benefit most from the reopening of the economy are getting hit the hardest.

Airlines American, United and Delta were all down around 4% to 5%. Cruise operators Carnival, Royal Caribbean and Norwegian each fell between 4% and 6%.

Energy stocks plummeted as well following a more than 3% drop in oil prices. Chevron and Exxon Mobil were down 8%.The OPEC+ group of nations also agreed over the weekend on a deal to produce more oil, a move that could boost supply and reduce crude prices.

Long-term bond rates continued to slide as well, a sign that fixed income investors are now far more worried about a Delta variant-induced economic slowdown than they are about rising inflation fears.

The yield on the 10-year US Treasury sank below 1.2% for the first time since February.

But as consumer prices continue to rise, some worry about a more insidious threat: the possibility that another Covid-19 outbreak could slow the economy even as inflation pressures mount. That's a phenomenon known as stagflation.

"Fear of stagflation will be a major concern for investors if a resurgence in Covid infections causes economies to slow while consumer prices continue an upward trajectory," said Peter Essele, head of investment management for Commonwealth Financial Network, in an email.

Small American companies were also getting hit particularly hard. The Russell 2000 was down 2.1%. That index primarily holds shares of small cap firms that generate more of their revenue from the United States than international markets.

The still-high number of unvaccinated Americans means vaccination rates have not met the threshold needed to stop the spread of Covid-19.

Most Americans who have not previously been infected or received vaccinations will likely contract the rapidly spreading Delta variant, Dr. Scott Gottlieb, commissioner of the US Food and Drug Administration during the Trump administration, told CBS' "Face the Nation" Sunday.

Forty-eight states are now seeing new case numbers surge at least 10% higher than the previous week, according to data from Johns Hopkins University.

Stocks fell Friday as well due to conflicting reports about the health of the US consumer. Retail sales grew surprisingly in June, but a measure of consumer sentiment for July showed that Americans are growing less confident about the economy.

Stocks still up sharply this year and from 2020's lows

But cloud-based call center software company Five9 was spared from the market sell-off Monday. Shares rose 6% on the news that video conferencing giant Zoom was buying it for nearly $15 billion. Zoom's stock fell.

Covid-19 vaccine maker Moderna, which is set to be added to the S&P 500 later this week, rallied too, surging more than 9%. BioNTech, which makes a vaccine with Pfizer, rose 5%. Pfizer and Johnson & Johnson, maker of a third Covid-19 vaccine, were both slightly lower however.

Despite the recent volatility, stocks are not far from record highs and are having a solid year.

What's more, the S&P 500 is up about 90% from its Covid-induced bear market lows of March 2020. Some strategists think the recent sell-off presents an opportunity.

"We do not expect a return to complete shut downs in the US so while the damage from the Delta variant can be significant, we are still in the 'buy the dip' camp," Bryce Doty, senior portfolio manager with Sit Fixed Income Associates, said in a report Monday.