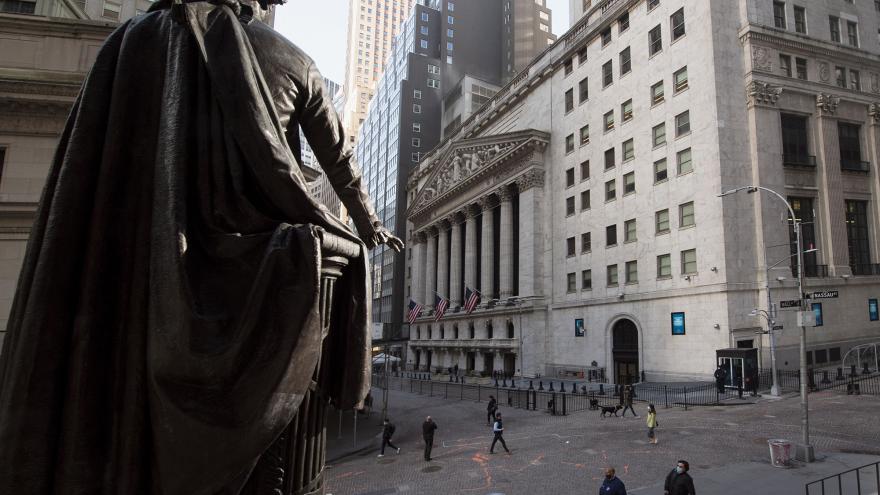 (CNN) -- Wall Street has been riding high as America's vaccination program exceeded expectations, lifting prospects of a speedy economic recovery. But a potential major disruption to that campaign overshadowed optimism on Tuesday and investors hit the brakes.

US stocks opened mixed, with only the Nasdaq Composite starting the day higher after the United States urged a pause to the one-dose Johnson & Johnson Covid-19 vaccine.

Meanwhile, a key inflation report showed consumer prices rose at a faster pace than economists had expected in March. Investors are worried that sudden inflation spikes could spell a raising of interest rates from the Federal Reserve sooner than hoped. They weren't in panic mode following the report, but the news was certainly unwelcome on Wall Street.

The US Centers for Disease Control and Prevention and the US Food and Drug Administration are recommending that the United States halt the use of Johnson & Johnson's Covid-19 vaccine over six reported US cases of a "rare and severe" type of blood clot.

The Johnson & Johnson vaccine was expected to help the United States ramp up its vaccination program, as the one-dose shot leads to quicker immunization timetables. The other two vaccines in use -- Pfizer and Moderna's -- are two-dose vaccines. They are not affected by Tuesday's pause request.

The fact that two other vaccines will remain in use may have helped keep stocks from tumbling. Also, reports of blood clots after receiving the J&J shot are rare: The six reported cases were among more than 6.8 million doses of the Johnson & Johnson vaccine administered in the United States.

AstraZeneca's shares traded down 0.7%, while Pfizer and Moderna stock rose at the opening bell.