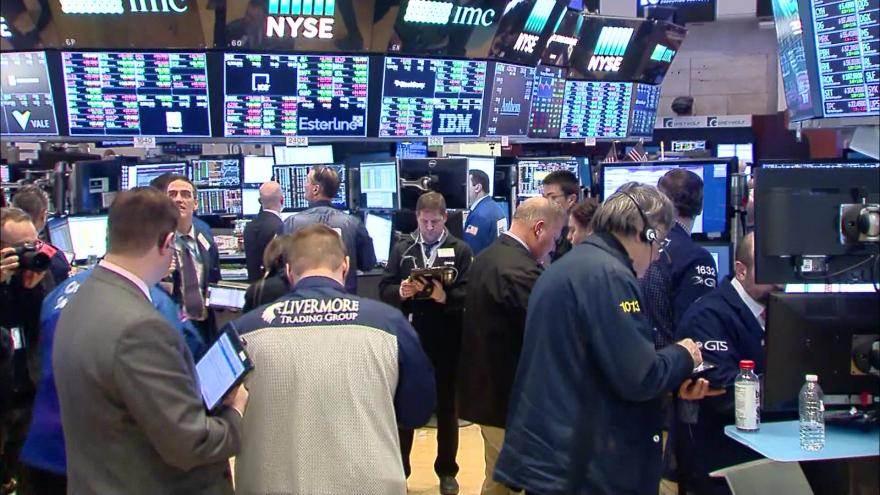 Across the globe, stocks were mixed Thursday, with European stocks declining after gains in Asian, as investors appeared skittish after this week's financial turmoil. The pound rose sharply after the U.K. central bank signaled it could raise interest rates soon.

The Dow Jones industrials are down 800 points, extending the market's losses.

Stocks started to fall in early trading and extended their losses throughout the morning.

The market's turmoil began last Friday and has continued this week as investors worried about early signs of inflation.
Analysts have also been saying the market has gotten much too expensive after a huge run-up over the last year and has been long overdue for a pullback.

The Dow Jones industrials are down 500 points, extending the market's losses.

The market opened little changed on Thursday but started to fall in early trading and extended its losses throughout the morning. The losses were steady, unlike the sharp swings seen over the past few days.

The benchmark Standard & Poor's 500 index is now down 8 percent from the record high it set January 26. It's still up 15 percent over the past year.

Technology companies, the leading sector over the past year, and banks fell the most. Microsoft lost 2.3 percent.
The Dow was down 501 points, or 2 percent, to 24,397.

Stocks are sliding further on Wall Street, putting the market on track for its second big weekly drop in a row.

The market got off to a mixed start on Thursday but has fallen steadily as the morning wore on.

Technology companies, the leading sector over the past year, and banks fell the most. Microsoft and JPMorgan Chase each lost 1.7 percent.

The losses, which began last Friday, put the benchmark Standard & Poor's 500 index almost 8 percent below the record high it set two weeks ago.

Stocks are mixed in the early going as traders digest a batch of company earnings reports.

Hanesbrands sank 8.8 percent after its results came up short of analysts' foreacasts. The company also issued a disappointing forecast.
Roomba maker iRobot plunged 24 percent after its earnings fell far short of what investors were expecting.

Bond prices fell. The yield on the 10-year Treasury note rose to 2.87 percent.