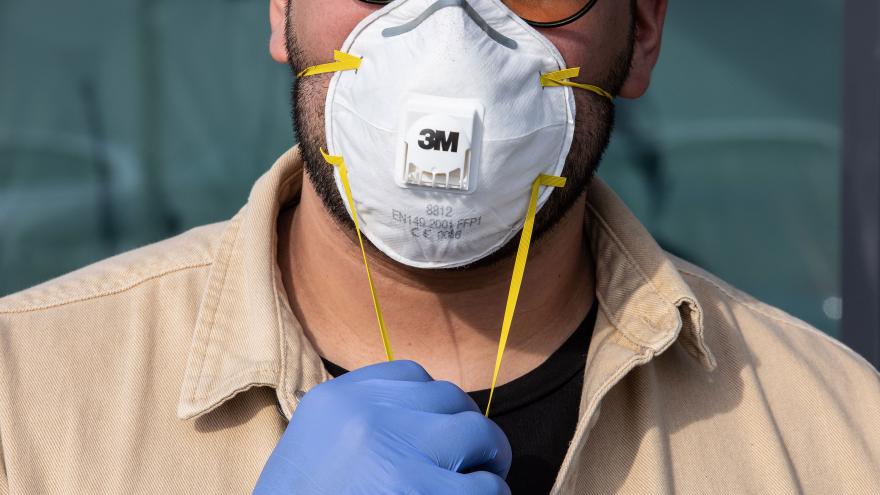 By Rob McLean, Laura He and Anneken Tappe, CNN Business

(CNN) -- Stock markets are falling around the world after the number of coronavirus cases surged in Italy and South Korea, putting two more major economies at risk from a virus that has already caused widespread disruption in China.

The index is on track for its worst day in just over two years, when it closed down more than 1,000 points twice within a week as inflation fears gripped Wall Street. On February 5 and again on February 8, 2018, the Dow's percentage drop was more than 4% on both days.

Since the index is higher now, on a percentage basis Monday's selloff isn't as dramatic as other drops in the Dow's history.

The S&P 500 and the Nasdaq Composite also fell sharply at the start of the trading day in New York. The S&P was down 3.5%, while the Nasdaqdropped nearly 4% in the early afternoon. The VIX, a measure of market volatility, shot up 42%.

The declines in the United States follow steep losses in Asia and Europe on Monday as investors take in the risks to corporate profits and economic growth posed by the coronavirus' spread.

South Korea's Kospi index closed down nearly 3.9%, its worst day since October 2018, after coronavirus cases in the country surged past 800. Italy's main index finished down 5.4%, after the number of cases there topped 200 — including five deaths — and authorities started shutting down public buildings, schools and sports events in parts of the country.

European exchanges ended the day in sharply in the red, with the United Kingdom's FTSE 100 closing down 3.3%. It was its worst day since January 2016.

Germany's DAX has shed 4%, and the French CAC 40 also fell nearly 4%, the biggest drop since June 2016 for both indexes.

A growing number of companies are warning that the coronavirus will prevent them from meeting sales or profit targets for the first three months of the year. Reduced demand for goods and services, and factory closures in China, are also expected to knock the global economy and weigh on trade at a time when Japan and Germany are already teetering on the brink of recession.

The stock market reaction to the outbreak had so far been rather muted, and US stocks have notched a string of record highs. But the spike in the number of cases in Italy and South Korea, the world's eighth and twelfth largest economies, raises fears of a pandemic and ups the stakes for businesses and investors.

The World Health Organization is preparing for a potential pandemic, said WHO Executive Director Mike Ryan.

Oil prices tumbled, too, on fears that reduced economic activity will hit demand for energy. US futures fell 5.3% to trade at $50.55 per barrel. Brent crude, the global oil benchmark, also lost 5.3% and was last trading at $55.43 per barrel.

Investors meanwhile piled into gold, sending prices up nearly 1.5%, and US Treasury bonds. The 10-year government bond yield fell to 1.36%. Prices and yields move in opposition to each other.

In currencies, the Japanese yen, another traditional safe haven, strengthened against the US dollar.

Coronavirus-related deaths have risen to more than 2,620 worldwide, with over 30 outside of mainland China. There are at least 79,300 confirmed cases globally.

Italian authorities have announced sweeping closures in the country's north as they scramble to contain Europe's biggest outbreak. Italy's confirmed cases surged from three on Friday morning to more than 150 on Sunday. The outbreak is the biggest so far outside Asia.