Puerto Rico was spared the brunt of Dorian, but a 'powerful hurricane' threatens mainland US 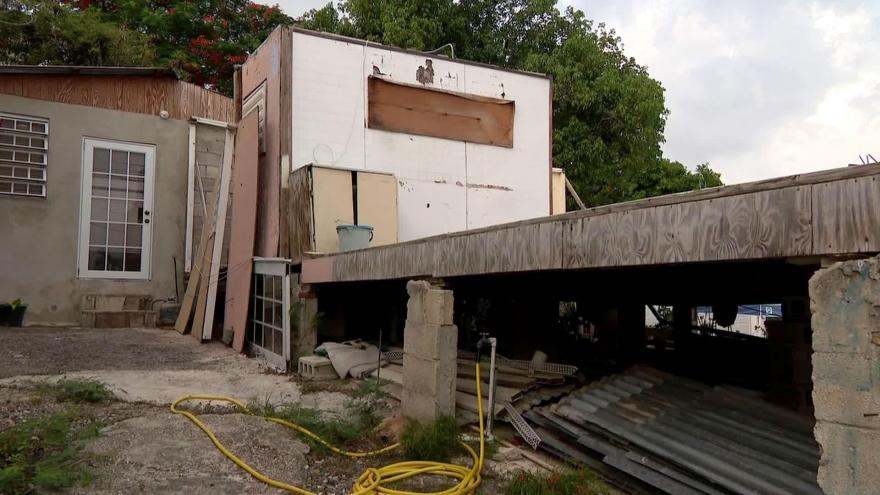 All that is left intact of Lucy Beascochea's house are the stone stairs leading up to where it once was in Ponce, Puerto Rico.

(CNN) -- Puerto Rico was spared the brunt of hurricane-force winds from Dorian that tore through the British and US Virgin Islands Wednesday, flooding roads and leaving areas without power.

But the threat is far from over for the mainland, with Dorian forecast to strengthen into a "powerful hurricane" as it heads toward Florida and other parts of the east coast.

As of 8 p.m. ET, the eye of Hurricane Dorian was located roughly 50 miles northeast of San Juan with hurricane-force winds extending 15 miles from the center of the storm, CNN meteorologist Dave Hennen said.

Wind gusts of up to 40 mph are possible over the next couple of hours, considerably lower than what was forecast, Hennen said.

"Some lingering showers are possible over Puerto Rico, but the strong bands are now pulling away from the Island into the Atlantic, where based on satellite and radar images, Dorian may be intensifying," he said.

With hurricane advisories discontinued for Puerto Rico and the Virgin Islands, attention now shifts to potential impacts to the mainland, he said.

Dorian is expected to gather strength in the next few days over the Atlantic and become a major Category-3 storm or higher.

The latest guidance shows Florida as the most likely target, "and Dorian will likely be a very formidable hurricane as it approaches late Sunday into Monday morning," Hennen said.

US Virgin Islands under curfew

The worst of the storm hit the British and US Virgin Islands, where Dorian toppled trees and power lines, leading local authorities to declare a state of emergency.

On the US Virgin Island of St. Croix, Stacy Mooney was recording video of the heavy rain outside and captured a sudden flash of blue-green light in the distance. Power went out for a few minutes, she wrote on Facebook.

"Overall, things are fine," she told CNN. "The winds have been fierce."

"Within an hour of its passage, The Virgin Islands Water and Power Authority mobilized crews to conduct a damage assessment. We immediately commenced restoration of service. Crews are now dispersed addressing isolated or pocket outages in a few locations," Greaux said.

Greaux said work will continue through the night.

One man died after falling from the roof of his house while cleaning a drain in preparation for the storm, Puerto Rico Public safety Secretary Elmer Roman said.

Otherwise, fears that Dorian would strain Puerto Rico's fragile infrastructure were largely unrealized. But with the memory of Hurricane Maria looming large in the island's psyche, many residents took the threat seriously.

"Thankfully, I've been preparing since May," said Krystle Rivera, whose family has been stocking up on water, canned food and gas in anticipation of the hurricane season.

Puerto Rico Gov. Wanda Vázquez Garced on Monday declared a state of emergency for the island and urged people to prepare for the storm. Schools across Puerto Rico were closed Wednesday.

In the city of Ponce on Puerto Rico's southern coast, people still have tarps over their homes from Maria's damage, Mayor Maria "Mayita" Melendez told CNN.

"There's already so much damage on the ground from (Maria) that this isn't going to take a lot to make a significant amount of damage, especially flooding," he said.