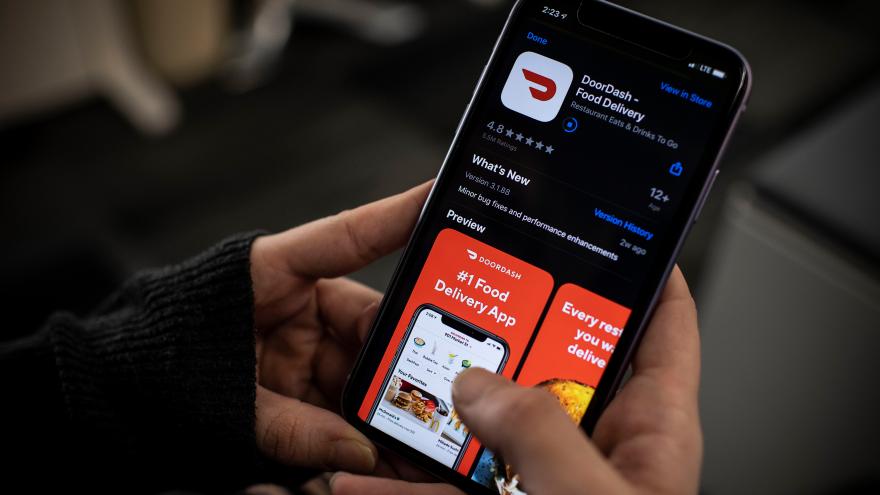 (CNN) -- DoorDash's stock soared nearly 80% above its IPO price in its Wall Street debut Wednesday, marking the culmination of a year that has seen delivery companies benefit greatly from skyrocketing demand for their services during the pandemic.

DoorDash opened at $182 per share, valuing the company at around $70 billion, or almost as much as FedEx. The company had priced its stock at $102 per share late Tuesday, up from its original proposed price range of between $75 to $85, a signal of strong investor demand.

The company, which was launched seven years ago by a group of Stanford students to help businesses in Palo Alto offer delivery, has become a lifeline for many restaurants and merchants across the country. Now, the country's biggest food delivery app is riding the wave of pandemic-fueled demand to Wall Street.

It is the first of two highly-anticipated IPOs this week for the on-demand economy, with Airbnb expected to go public on Thursday. Both companies are moving forward with their public offerings as the first coronavirus vaccines are expected to be made available to some in the United States and abroad. Unlike Airbnb, DoorDash's business has soared in recent months, but it remains an open question whether it can sustain its gains beyond the pandemic.

"The circumstances that have accelerated the growth of our business stemming from the effects of the Covid-19 pandemic may not continue in the future," DoorDash warned in its prospectus.

The company, which has raised $2.5 billion to date from investors including SoftBank and Sequoia Capital, was last valued at nearly $16 billion when it raised $400 million in new financing during the pandemic. A lead investor in the funding round commented that the service had "become ingrained in the lives of local communities as an essential service."

DoorDash, which expanded beyond food delivery to include household essentials from convenience stores during the pandemic, fulfilled 543 million orders in the first nine month of 2020 compared to 181 million in the same period in 2019, according to its prospectus. The company said it has has completed 900 million orders since its founding.

In its prospectus, DoorDash cofounder and CEO Tony Xu described small businesses as at risk of "being left behind in the convenience economy where consumers have become accustomed to obtaining everything in a few clicks, a trend that has only accelerated in a Covid world." He sees DoorDash as an antidote, stating that the core problem it aims to solve is to help "brick-and-mortar businesses compete, succeed, and flourish in these rapidly changing times."

In recent months, Doordash has explored new ways to work with businesses. A new product called Storefront lets restaurants set up online stores where they are not charged commission on items sold. Another new offering, Self-Delivery, allows businesses to list on its platform while taking care of their own delivery.

For years, the food delivery sector has been crowded, with companies raising and losing billions of dollars to subsidize prices to gain market share. DoorDash, which also owns Caviar, became the US leader in terms of sales in May 2019, according to data from Second Measure. But it took a pandemic for DoorDash to turn its first profit in the second quarter of this year, before reporting losses again in the most recent quarter.

There has been consolidation in the sector this year: European company Just Eat Takeaway.com acquired Grubhub and Uber acquired Postmates. But DoorDash continues to face a number of other challenges to its business model.

The high fees that delivery services charge restaurants on orders have come under scrutiny during the pandemic. Some states and cities have temporarily capped what third-party food delivery services can charge local businesses. The company warned in its prospectus that "if commission caps are retained after the Covid-19 pandemic subsides, our business, financial condition, and results of operations could be further adversely affected."

Moreover, gig economy companies including DoorDash are facing ongoing legal challenges over how they classify drivers as independent contractors, who don't have the same benefits and labor protections that employees are guaranteed by law.A reclassification of its workers would "significantly alter our existing business model and operations," the company wrote.