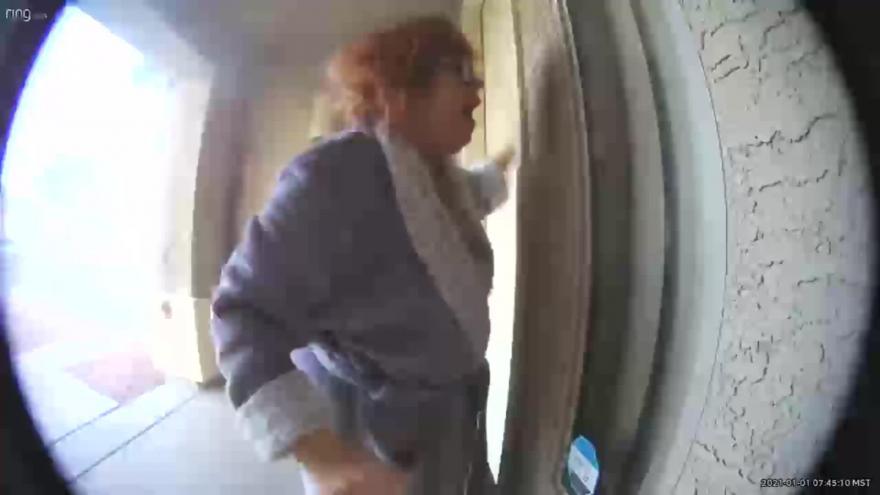 Carolyn Palisch helped save her neighbors from their burning home on New Year's Day.

(CNN) -- Nicole Salgado and her family woke up on New Year's Day to frantic knocking at the front door of their home in Avondale, Arizona.

Her house was on fire, and she didn't know it.

"We were all asleep," Salgado told CNN. "Then all of the sudden around 7:30 in the morning, we hear banging on our door and our doorbell is going off and we kind of get scared."

Salgado, a mother of four, ran to check on the kids while her husband hurried to the front door. There, he found their next-door neighbor, Carolyn Palisch, alerting the family to leave the house.

"He opened the door and all I heard was our neighbor Carolyn saying your house is on fire you have to get out," said Salgado.

Salgado immediately grabbed her kids and escaped the burning home. No one was wearing socks or shoes except for her oldest child.

"It was just kind of frantic at first, making sure we got everyone out and the dogs out," she said. "Then once we realized the full extent of it we were just in shock as we watched our home burn."

According to Salgado, minutes after they escaped, the roof collapsed and smoke filled the inside of their home. Firefighters said if the family had still been sleeping when the roof caved in, they would have inhaled the smoke and immediately passed out, Salgado told CNN.

"We are so thankful to just be alive," Salgado wrote in a post to social media, along with doorbell camera footage of the moment Palisch saved their lives.

Salgado said the family decided to post the video to share with the world what Palisch did for them. The video has now been liked almost 7 million times on TikTok.

"Never did we think it was going to blow up the way it did. But we are so grateful," said Salgado. "We are so glad it did for Carol, to show how amazing she is."

In the footage, Palisch is seen yelling outside the Salgado family's door, surrounded by smoke and flames. She continues to pound at the door until she is able to help the family escape.

"If it wasn't for her it'd be a totally different story," said Salgado. "We feel so thankful to her. We're always going to consider her family. She not only saved us, she saved our kids."

The cause of the fire is still under investigation by authorities, according to Salgado. A Go Fund Me account has been organized to aid the family, as they recover from losing their home.