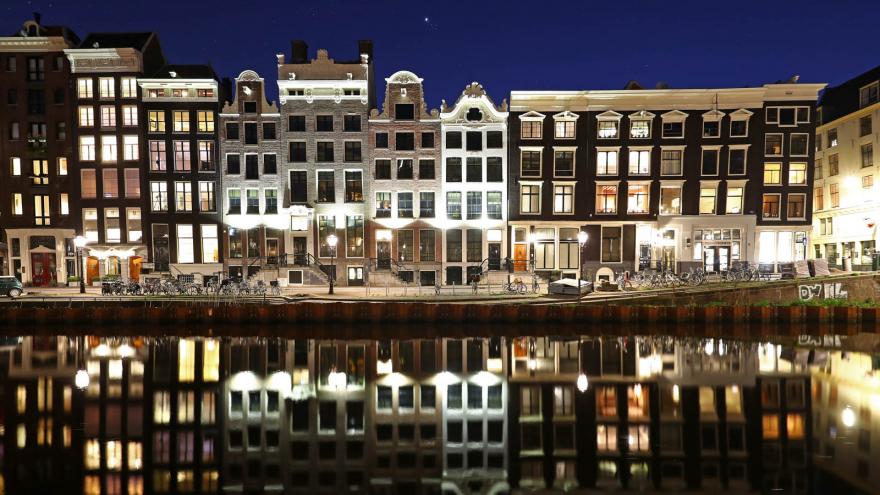 (CNN) -- Amsterdam's well-known tolerance of recreational drugs and sex has long attracted tourists in search of the seedier side to the city of canals and cycle paths.

But when border closures and lockdowns brought about by the Covid-19 pandemic emptied the Dutch capital of all visitors, many locals found the absence of the noisier, intoxicated ones to be a breath of fresh air.

Delighted by the calm atmosphere of their newly deserted historic city center and picturesque waterways, residents reclaimed sections of the city they'd avoided for years. Now they're not sure they want to give them back.

"Amsterdam needs tourists, without them our wonderful museums and restaurants wouldn't survive," says Nicola Theobald, who has lived in the center of the city for 30 years.

"But it was a bonus during the pandemic when they couldn't come. No more large groups thronging the canal area, at worst throwing up from drink and drugs. We got our city back and liked it that way."

In truth, Amsterdam has been struggling with the impact of tourists causing excessive noise, littering and urinating in public for years amid growing disgruntlement among residents.

Just before the pandemic, locals were complaining that their city had been transformed into a "tourist Disney world."

Now having experienced life without rowdy visitors, city authorities are determined not to return to those days.

Ahead of any vaccine-fueled summer travel revival, they've launched a surprising tourism campaign to try to shake off Amsterdam's reputation as a party capital.

So while tourists are being encouraged to travel to the city as lockdown restrictions ease, rowdy visitors and bachelor parties intent on drinking and taking drugs have been explicitly told to stay away.

The city council has spent €100,000 ($119,000) on an online campaign encouraging people to visit the city's cultural heritage, while also warning disrespectful "nuisance tourists" that they are not welcome.

"We do not want to go back to what we saw before the pandemic, where massive crowds in the Red Light District and the city's entertainment areas caused a nuisance to residents," a statement by the city council reads.

"Visitors who respect Amsterdam and the people of Amsterdam have always been welcome and will, of course, remain so.

"Visitors who treat our residents and heritage with disrespect are not welcome. The message we have for them is: don't come to Amsterdam."

The aim of the online campaign is to "stimulate desired behavior" among tourists, says Geerte Udo, chief executive of amsterdam&partners, the city's promotion agency.

He says the message is simple, "you are welcome, but please drink inside, use a urinal and be quiet."

"We don't want visitors who display limitless behavior, without respect for the city and its inhabitants," adds Udo.

Currently targeting British men, aged 18 to 34 who are considering a trip to the Dutch capital, the campaign is to be rolled out to target groups in other countries over the next few months.

In 2019, around 20 million international tourists visited the Dutch capital, with 70% coming from neighboring countries Germany, and Belgium, as well as the UK.

Titled "Enjoy & Respect," it warned both British and Dutch tourists that they risked €140 ($170) fines if they were caught urinating in public, disturbing the peace in the center or littering.

When surveyed, 45% of British respondents said the campaign had made them more aware of the impact of disruptive behavior.

Anyone who has visited Amsterdam in recent years, will understand why. Some of the worst excesses of tourist behavior are often heralded by loud voices speaking in British accents belonging to outlandishly attired bachelor or "stag" parties.

Local councilor Rob Hefland summed the situation up bluntly in an interview with the DutchNews website.

"If it is your intention to see the most beautiful city in the world this summer, come to Amsterdam," said Hefland. "If your intention is to booze and misbehave, dressed like a penis, look elsewhere!"

The latest campaign is part of the city council's mission to present Amsterdam in a new light, leaving behind its notorious reputation as a party destination where anything goes.

"Amsterdam does not want to be known as the city of coffee shops and the Red Light District. It is fairly tacky and has negative connotations," says Ko Koens, professor of new urban tourism at the University of Applied Sciences in Rotterdam.

But Koens is skeptical about the council's approach to attracting "a certain type of tourist."

"The Amsterdam brand is built on 600 years of tolerance and openness," he says. "How do you create an image for yourself where you are open and tolerant, but at the same time send the message 'dear visitor grow up'?"

Some residents have welcomed the campaign, which they hope will restore calm in the city center.

"We need to find a balance. We want 'responsible' tourists who enjoy the city for all it has to offer and, at the same time, respect those of us who live here," says Theobald.

"We don't want to be the city known as an ideal stag party venue, but we also don't just want to be an 'elite' venue."

Others say the measures don't go far enough to address the problems caused by mass tourism.

Policy economist Martijn Badir says the new campaign "distracts from the fundamental policy change needed to prevent the return of overtourism which we saw before the crisis."

Last summer Badir launched a petition titled "Amsterdam has a choice," which was signed by over 30,000 people.

It urged authorities to improve the quality of life for residents in the city center and restrict overnight tourist stays to 12 million. The total stood at 18.8 million in 2019.

According to Badir, the council should focus on more hard-hitting measures, such as raising tourism tax or cracking down on Airbnbs in the center, instead of a marketing campaign.

"Campaigning to attract the 'right' kind of tourist doesn't work at all," he says.

Badir adds that city authorities should instead aim to reduce disturbance by banning foreign tourists from coffee shops and moving the Red Light District to a new location outside the city center.

Last year, the city's mayor Femke Halsema suggested opening a "prostitution hotel" outside the center. The proposal was criticized by sex workers who say the move puts their safety and livelihoods at risk.

Amsterdam isn't the only major destination weighing up its relationship with more unruly tourists after getting a taste of life without them.

Czech Republic capital Prague, another city that's struggled to combat drunken behavior from tourists -- is looking at ways to encourage visitors to enjoy lesser known attractions away from its center.

However, even well-behaved visitors can be problematic if there's too many of them. Florence recently launched a new initiative aimed at dissipating the enormous crowds that surge into the Italian city to view famous artworks in its Uffizi gallery.

Officials have dispatched many key pieces into the surrounding countryside as part of its "Uffizi Diffusi" project to spread visitors into overlooked areas that will benefit from the revenue they bring in.

Meanwhile in Amsterdam, steps are already being taken to crackdown on rowdy behavior over the summer, including temporary bans on laughing gas, alcohol and sound systems during large gatherings along the canals and in the Red Light District.

Extra police will be deployed to issue fines to visitors sleeping in their cars via a mobile credit card machine, the city council said in a statement.