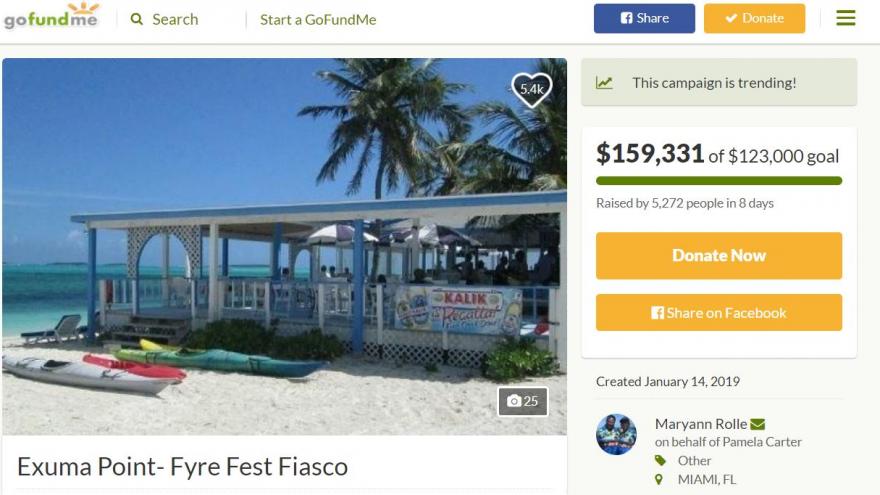 (CNN) -- The recent release of two documentaries about 2017's failed Fyre Festival have brought the entertainment disaster back into public view, and one jilted business owner in particular is getting a lot of love.

A fundraising campaign for Bahamian restaurant owner Maryann Rolle has raised over $140,000 after Rolle claimed in one of the documentaries she had to spend her life savings to pay her staffers after festival organizers stiffed her.

If you don't recall, or were lucky enough to have avoided coverage of the original debacle, Fyre Festival was supposed to be a luxury music and culture festival on a private island in the Bahamas endorsed by rapper Ja Rule and a bevy of internet influencers. Some people paid thousands of dollars apiece to fly in on chartered planes, expecting to hear performances by Blink-182 and other acts.

Instead of a tropical Coachella, however, it turned out to be a desolate, half-built wasteland of tents and soggy mattresses with minimal food and no celebrities in attendance. Angry attendees called it a scam, and the law agreed. In October 2018, Fyre Festival's organizer, Billy McFarland, was sentenced to six years in prison for wire fraud.

Now both Netflix and Hulu have released documentaries reliving the carnage. And while they contain plenty of cringeworthy moments, viewers have been moved by the experience of Maryann Rolle and her husband Elvis. The Rolles own the Exuma Point Bar and Grille on Great Exuma, near where the festival was supposed to take place.

In Netflix's doc "Fyre: The Greatest Party That Never Happened," Maryann Rolle claimed the organizers of the festival requested her catering services.

However, she says they never paid her.

"I had 10 persons working for me just preparing food all day and all night, 24 hours," she says in the documentary. "I literally had to pay all those people... I went through about $50,000 of my savings that I could've had for a rainy day. They just wiped it out and never looked back."

Viewers were bothered by Rolle's story and by how it seemed Fyre Festival's organizers left Bahamian locals in the lurch when the whole thing went belly-up. As a result of this outpouring of concern, a verified GoFundMe set up for Rolle has exceeded its goal of $123,000. As of Monday afternoon, 4,445 donors had chipped in more than $140,000.

"As I make this plea it's hard to believe and embarrassing to admit that I was not paid...I was left in a big hole! My life was changed forever, and my credit was ruined by Fyre Fest," Rolle wrote on the GoFundMe page.

"There is an old saying that goes 'bad publicity is better than no publicity' and I pray that whoever reads this plea is able to assist."

Rolle's struggle also caught the attention of Ja Rule, who has tried to distance himself from Fyre Festival's toxic fallout, saying on social media that he too was scammed.

"My heart goes out to this lovely lady..." Ja Rule wrote on Instagram. "We've never met but I'm devastated that something that was meant to be amazing, turn out to be such a disaster and hurt so many ppl... SORRY to anyone who has been negatively effected by the festival."

CNN has reached out to Maryann Rolle and GoFundMe for comment.