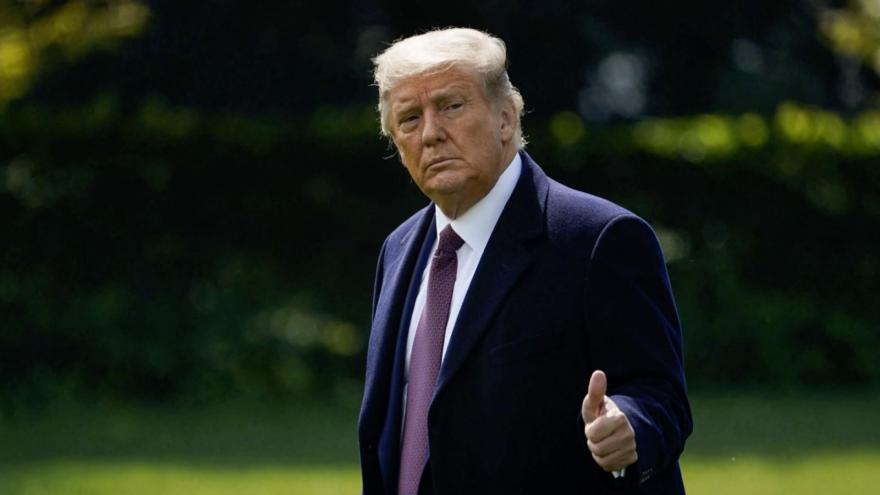 Donald Trump's political organization entered July with nearly $102 million in cash reserves, which is an unprecedented war chest at this stage in the election cycle for a former president, according to new figures.

(CNN) -- Donald Trump's political organization entered July with nearly $102 million in cash reserves -- an unprecedented war chest at this stage in the election cycle for a former president, according to new figures.

Trump's fundraising haul speaks to his continued ability to raise money from small-dollar donors online, as he trumpets baseless claims that election fraud led to his loss last year.

Trump's team said 3.2 million contributions flowed into the former President's political committees during the first six months of the year.

In a statement, Trump once again complained of a "stolen" election and cited the donations as a sign that millions of Americans "share my outrage and want me to continue to fight for the truth."

Most of Trump's cash reserves are stockpiled in his Save America leadership PAC, with $90 million remaining in its accounts as of June 30, new filings show -- giving the Republican a large sum to unleash as his party seeks to seize control of the House and Senate in next year's midterm elections. Trump also has hinted at seeking the White House again in 2024, and the new numbers show he remains the GOP's dominant fundraising figure, despite losing the election and access to social media platforms.

In announcing his fundraising totals, which were first reported by Politico, on Saturday, Trump's team said his committees had raised nearly $82 million in the first six months of the year, but that total also included funds collected in 2020 that were transferred into his account this year.

Trump spokesman Jason Miller on Sunday said the transfers were included because they amounted to "all new revenues to Save America for this period."

Save America is the former President's primary fundraising and public relations vehicle, and he uses it to issue statements endorsing his favored candidates and denouncing those he opposes. But the PAC had not contributed to any congressional candidates during the first six months of the year, according to its filings with the Federal Election Commission. Miller told CNN that checks began going out to endorsed candidates in July, after the period covered by the new filings.

Leadership PACs such as Save America have a cap on donations, but federal rules impose few restrictions on how their contributions can be spent. And during the first six months of the year, the PAC spent about $68,000 for lodging and meals at the Trump Hotel Collection, according to records.

Trump has also endorsed a super PAC, Make America Great Again Action. The super PAC's filing Saturday night shows it took in a little more than $5 million as of June 30. Individual donors include Don Ahern, a Nevada businessman who contributed $1 million, former Georgia Sen. Kelly Loeffler at $250,000 and MyPillow CEO Mike Lindell at $100,000. Lindell has been on a mission to advance claims that widespread fraud contributed to Trump's defeat.

The super PAC recently has begun spending to boost Trump-favored candidates -- pumping $100,000 into an unsuccessful attempt in July to help elect Texas Republican Susan Wright in a special runoff for a US House seat. Wright lost to fellow Republican Jake Ellzey.

Another GOP primary on Tuesday -- this time for a US House seat from Ohio -- will offer the latest test of Trump's ability to sway voters. Make America Great Again Action has spent more than $400,000 so far to promote Trump's choice, coal lobbyist Mike Carey, in the Columbus-area special election.

CORRECTION: An earlier version of this story incorrectly stated the amount of contributions to Trump's political committees. It is 3.2 million contributions.