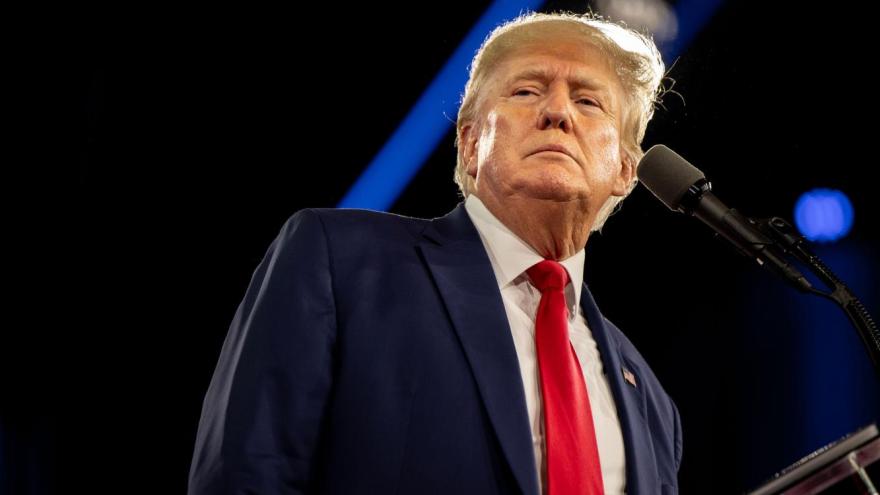 (CNN) -- Former President Donald Trump has repeatedly called for the lengthy jailing of opponents of his who he claimed mishandled classified materials.

CNN's KFile reviewed comments from the former President, dating back to his first presidential campaign in 2016, from speeches, interviews and comments made on social media.

The former President is in potential legal jeopardy after the Justice Department's search of his Mar-a-Lago residence last month retrieved more than 100 classified documents, with the DOJ alleging that US government documents were "likely concealed and removed" from a storage room at the Florida resort as part of an effort to "obstruct" the FBI's investigation. More than 320 classified documents have now been recovered from Mar-a-Lago, the Justice Department said, including more than 100 in the FBI search earlier this month.

Speaking in 2016 about the government's decision not to charge Hillary Clinton with crimes related to their investigation into her handling of classified material and use of a private email server while she was secretary of state, then-candidate Trump repeatedly promised that his administration would strictly enforce all rules regarding classified material.

"On political corruption, we are going to restore honor to our government, '' Trump said in August 2016. "In my administration, I'm going to enforce all laws concerning the protection of classified information. No one will be above the law."

"One of the first things we must do is to enforce all classification rules and to enforce all laws relating to the handling of classified information," he said in September 2016.

Speaking in July of that year, Trump said Clinton's mishandling "disqualifies" her from public service.

"Any government employee who engaged in this kind of behavior would be barred from handling classified information," Trump said. "Again, that alone disqualifies her."

It isn't just Clinton who Trump has criticized, he also repeatedly called for the jailing of other opponents for what he said was the mishandling of classified material.

"That is the most confidential stuff," Trump said. "Classified. That's classified. You go to prison when you release stuff like that."

Trump also said several times that former FBI Director James Comey should be "prosecuted" in tweets pushing unfounded accusations that Comey disclosed classified information. A DOJ inspector general report found "no evidence that Comey or his attorneys released any of the classified information contained in any of the memos to members of the media." The IG's office referred the findings of its report to the Justice Department for possible prosecution and prosecutors declined to bring charges.

"He leaked CLASSIFIED information, for which he should be prosecuted," one Trump tweet in April 2018 said, with another saying Comey should be in jail.

Trump also repeatedly and strongly called for the prosecution of his former National Security Adviser John Bolton. Following the publication of Bolton's memoir from his time in the Trump White House, "The Room Where It Happened," Trump said that the book contained classified information.

A federal judge involved in one of the Bolton cases did find that he likely put national security at risk with his book, but the judge also rejected the Trump administration's attempt to block the book's publication.

In 2020, Trump told Fox News that Bolton should go to jail for "many, many years" for releasing the memoir.

"Classified information; he should go to jail for that for many, many years," Trump said.

In an interview with Greta Van Susteren, Trump again called for Bolton's imprisonment.

"Here's what he did: He released classified information, highly classified information and confidential information, all different categories," Trump said. "John Bolton should never have been allowed to do that. You know, the young sailor that sent a picture home to his mother and other people. They go to jail for a long period of time. You can't do that. And that was not nearly as vital, as important, as John Bolton."

Trump tweeted in June 2020 that Bolton was "washed up" until Trump hired him.

"I brought him back and gave him a chance," the tweet read. "[He] broke the law by releasing Classified Information, in massive amounts. He must pay a very big price for this, as others have before him. This should never to happen again!!!"

Trump later said in an interview with Brian Kilmeade that regardless of if Bolton unknowingly leaked information in his book "he should go to jail."

A Justice Department probe into Bolton was dropped in 2021, and he told CNN's Wolf Blitzer on "The Situation Room" last year that his book "did go through a pre-publication review process" and that it "was cleared by the expert team that reviewed it, arduously."

For his part, the former President has insisted that he declassified all of the documents seized in the FBI's search of Mar-a-Lago, claiming in a statement that he had a "standing order" saying "that documents removed from the Oval Office and taken to the residence were deemed to be declassified the moment he removed them."

The search warrant released by the Justice Department identified possible violations of three laws, none of which are solely dependent on if the information was classified.

In a court filing on Tuesday night, the Justice Department alleged that government documents were also "likely concealed and removed" from a storage room at Mar-a-Lago as part of an effort to "obstruct" the FBI's investigation into Trump's potential mishandling of classified materials.

In response, Trump acknowledged in a court filing Wednesday that classified material was found at Mar-a-Lago in January, but argued that it should not have been cause for alarm -- and should not have led to the search of Trump's Florida residence earlier this month.