Domino's will pay you $3 to not get your pizza delivered 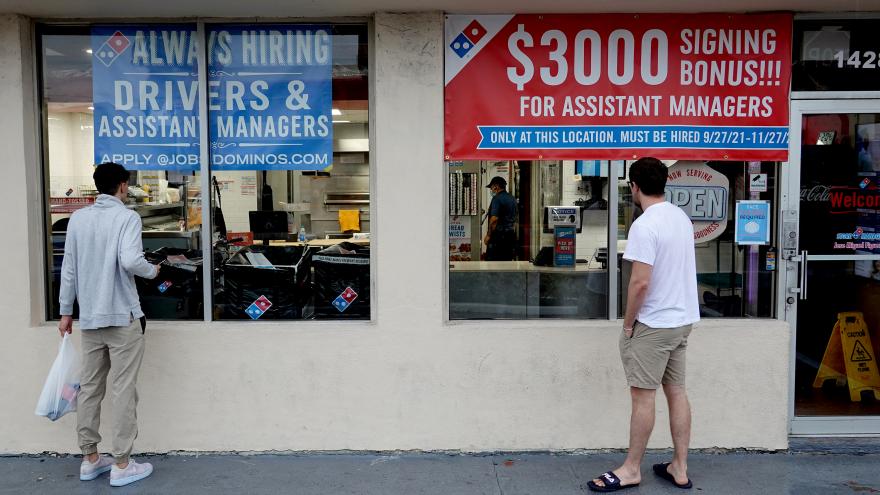 (CNN) -- Facing a shortage of workers, Domino's Pizza is hoping to incentivize its customers to choose carryout over delivery.

Beginning Monday through May 22, Domino's will be "tipping" customers $3 if they order online and choose carryout. The credit can be used on a future online carryout order.

The promotion could help alleviate stress on its limited number of workers right before the Super Bowl, which is one of the company's biggest pizza sales days.

The labor shortage has plagued Corporate America -- particularly companies that pay low wages. The percentage of Americans who are in the job market, either as workers or as active job seekers, is measured by the labor force participation rate. And that rate is nowhere near its pre-pandemic level. As of December, the measure stood at 61.9%, having recovered about half of what was lost at height of the pandemic compared with the February 2020 rate of 63.3%.

Inflation is also biting Domino's. The chain recently announced changes to its chicken wings deal, including cutting the number from 10 pieces to just eight as costs soar. Domino's also made the deal an online exclusive, meaning fewer workers are needed to answer the phones.

Domino's CEO Richard Allison recently said at an industry conference that the company expects to deal with "unprecedented increases" in food prices, explaining that the costs of its ingredients are increasing 8% to 10% compared to last year. That is substantially higher than the usual hike of 3% to 4% the chain normally forecasts.

Although pizza sales have exploded during the pandemic, Domino's hit a rocky patch in its most recent earnings as same-store sales fell for the first time since 2011. Its next earnings will be released on March 1.

Domino's said in a statement that the carryout credit can be combined with other offers "making for a tasty deal." It also could help retain customers. Pizza customers are notoriously fickle and tend to choose the chain that offers the better deal.