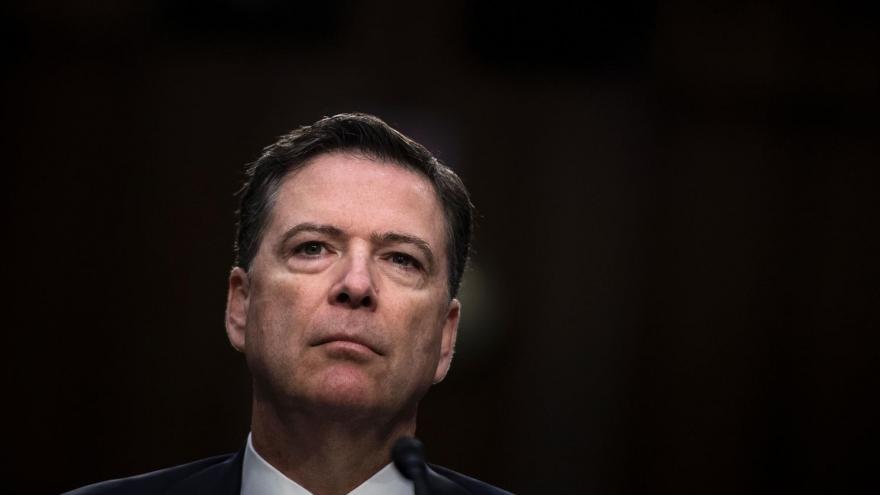 Comey set a "dangerous example" for FBI employees in an attempt to "achieve a personally desired outcome," the report states.

However, the IG found "no evidence that Comey or his attorneys released any of the classified information contained in any of the memos to members of the media."

The inspector general's office referred the findings of its report to the Justice Department for potential prosecution earlier this summer. Prosecutors declined to bring a case, the report says.

CNN has previously reported that the Justice Department prosecutors didn't believe there was evidence to show Comey knew and intended to violate laws on dealing with classified information.

The seven memos, which offer up stark examples of Trump's early attempts to disrupt a federal probe into his inner circle, became a catalyst for the special counsel investigation when the contents of one first appeared in The New York Times. Comey testified in a 2017 Senate hearing that he had sent documents to a friend, Columbia University law school professor Daniel Richman, and directed him to share the substance with a reporter. Trump has blasted Comey as a "leaker" for Comey's actions.

"Perhaps never in the history of our Country has someone been more thoroughly disgraced and excoriated than James Comey in the just released Inspector General's Report. He should be ashamed of himself!" Trump tweeted Thursday.

In one of the most consequential memos -- the one which Comey asked Richman to detail to a reporter -- Comey described a one-on-one meeting he had with Trump in the Oval Office where the President suggested he scuttle the federal investigation into Michael Flynn, the former national security adviser.

Comey on Thursday noted the report's concluding there was no classified information given to the media.

"I don't need a public apology from those who defamed me, but a quick message with a 'sorry we lied about you' would be nice," he tweeted. "And to all those who've spent two years talking about me 'going to jail' or being a 'liar and a leaker'—ask yourselves why you still trust people who gave you bad info for so long, including the president."

Part of Comey's breach of FBI protocol came in how he kept the memos private, among his personal property, the report says. Comey had kept four of the seven memos he wrote in a safe at his home, and had not told the FBI he kept them there after his firing. He eventually handed them over to the special counsel's investigation in June 2017.

"Department policy states that employees may not, without agency permission, remove records from the Department -- either during or after employment," the inspector general wrote. "The FBI policies are no different."

The inspector general said it interviewed 17 witnesses, including Comey and Richman, to produce its report.

Though the IG found that none of the classified information that Comey shared outside the FBI made it into the press, dulling some of the sharpest barbs from Trump, the report concludes with steep criticism for the former FBI chief.

"In a country built on the rule of law, it is of utmost importance that all FBI employees adhere to Department and FBI policies, particularly when confronted by what appear to be extraordinary circumstances or compelling personal convictions," the report states. "Comey had several other lawful options available to him to advocate for the appointment of a Special Counsel, which he told us was his goal in making the disclosure. What was not permitted was the unauthorized disclosure of sensitive investigative information, obtained during the course of FBI employment, in order to achieve a personally desired outcome."

Flynn eventually pleaded guilty in late 2017 to lying to the FBI about his conversations with Russia's ambassador -- one of the earliest sets of charges to stem from special counsel Robert Mueller's office.

Comey has said that Richman, a former prosecutor, had been providing him legal advice since he was fired.

This is not the first time the inspector general's office has criticized Comey. In a report released last summer, some of Comey's actions throughout the FBI's investigation of Hillary Clinton's private email server were called "extraordinary and insubordinate."

The inspector general made a subtle reference to that past report in the one released Thursday. "We have previously faulted Comey for acting unilaterally and inconsistent with Department policy," the report says.

CNN reported last year that the inspector general's office had also questioned a number of close associates of Comey's from outside of the FBI that he had shared some of the memos with, in addition to Richman.

According to the report, Comey emailed four of the memos to his personal attorney Patrick Fitzgerald in the days following his firing.

In one of the memos, Comey had crudely redacted a paragraph that discussed foreign affairs with a marker and an index card, the report says. Comey told investigators that he redacted the parts of the memo because it was "utterly unrelated to what I was seeking their advice and counsel about." He said he did not consider the section he redacted to be classified.

Fitzgerald forwarded the email with the attached memos days later to David Kelley and Richman, who were both also serving then on Comey's legal team.

Separately, Comey had also messaged Richman a photo of the memo on the Oval Office meeting on his cell phone.

Copies of the memos that were produced to Congress last year contained classification markings showing that four had been designated "secret" or "confidential." The other three memos did not have markings indicating they contain classified information.

The FBI began the process of reviewing the classification of the memos on June 1, in the days after the existence of the memos first became public knowledge and following multiple congressional requests to the FBI for the memos.

Final classification of the documents was made by Bill Priestap, then the chief of the FBI's counterintelligence division, after a review by the division's law unit.

Priestap told the IG's office that the review process was "done very carefully" and under "usual practice."

The unit chief who presented recommendations for Priestap on June 6 told the IG's office that Priestap "had a few questions" but did not "question the decisions" about classification designations that she had recommended to him.

Comey disputed the "secret" classification of one of his memos, which detailed a conversation with then White House chief of staff Reince Priebus, the day after the FBI designated it as such.

An FBI agent had brought the memos, which had been recently classified, over to Comey's house so he could review them before his testimony, and Comey pointed out the "secret" designation to the agent, saying that it was incorrectly marked and should have been marked classified, the agent told IG investigators.

Comey told investigators from the inspector general's office that he did not remember discussing classification of the memos with anyone at the FBI and that it had never occurred to him to put them through a classification review to confirm his belief that they contained no classified information, according to the report.

The report shows how Comey shared the memos after he would write them with only a very small group of senior FBI officials. Typically, Comey would give the original copy of each memo that he wrote to his chief of staff, James Rybicki, who would keep them in locked drawer in his desk, Rybicki said.

In interviews, top officials at the FBI including deputy director Andrew McCabe and McCabe's special counsel, Lisa Page, described why Comey limited the memos to a "very, very small group."

Comey's "objective in keeping the [number of] people exposed to [the memos] incredibly small was an effort to insulate the core team, who was doing the Russian investigation,...from knowing any of this, so that it didn't, ultimately, impact...their investigative steps...," Page told investigators.

Republican leaders on Capitol Hill were quick to seize on the report and tie its findings to the narrative that top law enforcement officials at the FBI and Justice Department had worked against Trump.

"Today's report is a disappointing reminder that the former FBI Director put partisanship and personal ambition over patriotism and his legal obligations to the American people," Rep. Jim Jordan, the top Republican on the House Oversight Committee, said. "His actions were disgraceful and part of a wider effort within the Obama Justice Department to undermine President Trump."

Senate Judiciary Chairman Lindsey Graham called it "a stunning and unprecedented rebuke of a former Director of the FBI."

The DOJ inspector general's office is also said to be nearing the release of another hotly anticipated report -- this one probing the origins of the Russia investigation and the FBI's use of covert surveillance methods.

CNN reported last month that federal investigators in Inspector General Michael Horowitz's office had conducted more than 100 interviews as part of the review. Its release is not expected until September at the earliest -- after the release of the Comey report.

Allies of the President, including Graham, have predicted that the FISA report would be "ugly and damning." Last week, Graham vowed to bring Horowitz before his committee to publicly testify on the investigation, which the President has nicknamed "Spygate."