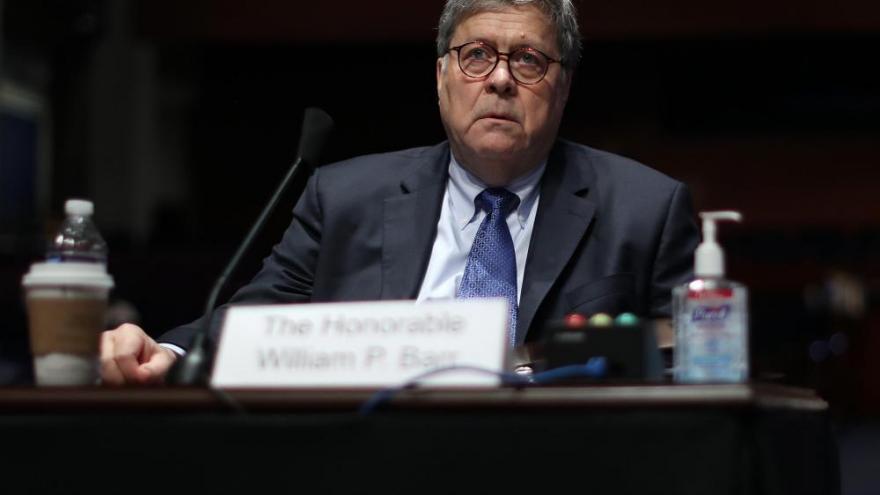 The Justice Department is refusing to send its senior officials to testify before Congress these next two weeks, blaming the Democrats' treatment of Attorney General William Barr during a July hearing.

(CNN) -- The Justice Department is refusing to send its senior officials to testify before Congress these next two weeks, blaming the Democrats' treatment of Attorney General William Barr during a July hearing.

In a letter to the House Judiciary Committee dated Monday declining to make witnesses available, the Justice Department accused Democratic committee members of "scolding and insulting the Attorney General" during a July 28 hearing, repeatedly interrupting him, and refusing to let him answer questions.

The department accused members of instead using "their allotted time to air grievances" rather than trying to obtain information from Barr.

"We very much regret that the committee did not elect to engage in a meaningful, good-faith effort to obtain information and views from the Attorney General while he was present and prepared to testify," Stephen Boyd, the assistant attorney general for legislative affairs, wrote in the letter to Judiciary Chairman Jerry Nadler.

"Having squandered its opportunity to conduct a meaningful oversight hearing with the Attorney General, it remains unclear how further public spectacles with other Department officials would now -- a mere 14 legislative days since the Attorney General's hearing -- advance the Committee's legitimate oversight efforts."

Boyd also argued that the hearing did "preciously little to advance any legitimate interest."

Nadler on Tuesday accused Barr of "trying to pick a fight" with his committee to try and divert from President Donald Trump's handling of the coronavirus pandemic.

"41 days before the election, Mr. Barr is trying to pick a fight with the Committee in an attempt to change the subject from the President's disastrous handling of the pandemic, and set a new standard for sheer arrogance and open contempt of Congress. We will plan accordingly," the New York Democrat wrote on Twitter.

A Judiciary subcommittee had invited Eric Deiband, assistant attorney general for civil rights, to testify Thursday during a hearing on "current policies and actions of the Civil Rights Division."

Director of the Bureau of Prisons Michael Carvajal and Director of the US Marshals Service Donald Washington were asked to appear before another Judiciary subcommittee for an oversight hearing in October on their agencies.