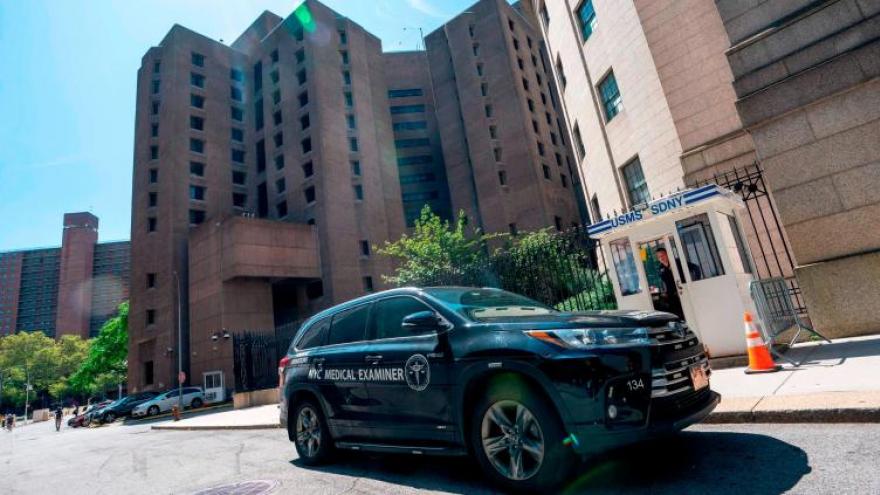 The Justice Department says the Metropolitan Correctional Center in New York, pictured here on August 10, 2019, where Jeffrey Epstein was found reportedly dead in his cell is in the process of being temporarily closed.

(CNN) -- The federal detention center in New York that is notoriously known as the place where Jeffrey Epstein was found dead in his cell is in the process of being temporarily closed, according to a Justice Department spokesperson.

The Metropolitan Correctional Center in Lower Manhattan drew criticism for its management after Epstein was found dead there in 2019, shortly after his arrest on charges that he operated a sex trafficking ring in which he allegedly sexually abused dozens of underage girls.

The facility has also been occupied by other high-profile people, including Joaquin "El Chapo" Guzman, who was housed there before and during his federal trial.

A Justice Department spokesperson said in a statement to CNN that the department was committed to ensuring that facilities in the federal prison system are "safe and secure."

"As part of this effort, the Bureau of Prisons has assessed steps necessary to improve conditions at the Metropolitan Correctional Center (MCC) in New York City," the spokesperson said. "In an effort to address the issues at MCC NY as quickly and efficiently as possible, the Department has decided to close the MCC, at least temporarily, until those issues have been resolved."

"Planning for the deactivation is under way, and we will have more updates as that process continues," the statement read.

The New York Daily News was first to report on the closure.

There are 263 inmates currently housed at the Metropolitan Correctional Center, according to the Bureau of Prisons website.

David Patton, the executive director and attorney-in-chief of the Federal Defenders of New York, welcomed the government's decision to temporarily shutter the facility, saying it "has been a long-standing disgrace."

"It's cramped, dark and unsanitary. The building is falling apart. Chronic shortages of medical staff mean that people suffer for long periods of time when they have urgent medical issues," Patton said, adding that he worries the Metropolitan Detention Center, a nearby federal prison in Brooklyn, "suffers many of the same problems."

"If they don't address those problems at the MDC, this move will accomplish nothing, and nearly 2,000 people will continue to be subject to truly inhumane treatment," Patton said.

Edward Friedland, district court executive for federal court in the Southern District of New York, which works closely with the Metropolitan Correctional Center, told CNN the court was not made aware of the closing of the facility "until after media inquiries."

"After several inquiries by the Court, we were notified late today of the BOP's plans to close the facility," Friedland said in a statement. "We will be meeting with BOP officials to review their plan so that we can ensure all necessary access for attorneys to their clients and the ability for defendants to appear in a timely fashion as required by the court."

Tyrone Covington, the union representative for correctional officers at the Metropolitan Correctional Center, said he was disappointed that no one had reached out to inform them of such a big decision.

"I'm disappointed in the Dept. of Justice and the Federal Bureau of Prisons for simply not notifying us of such a big decision, even though we believe this is something that should have happened," Covington told CNN on Thursday night. "But you should have told us."

"The union didn't know and no one in management locally knew, or was not made aware of" the decision, he added.

The move comes several weeks after Deputy Attorney General Lisa Monaco visited the Metropolitan Correctional Center "to get a first-hand look at its operations and infrastructure given ongoing concerns," according to a Justice Department release issued earlier this month.