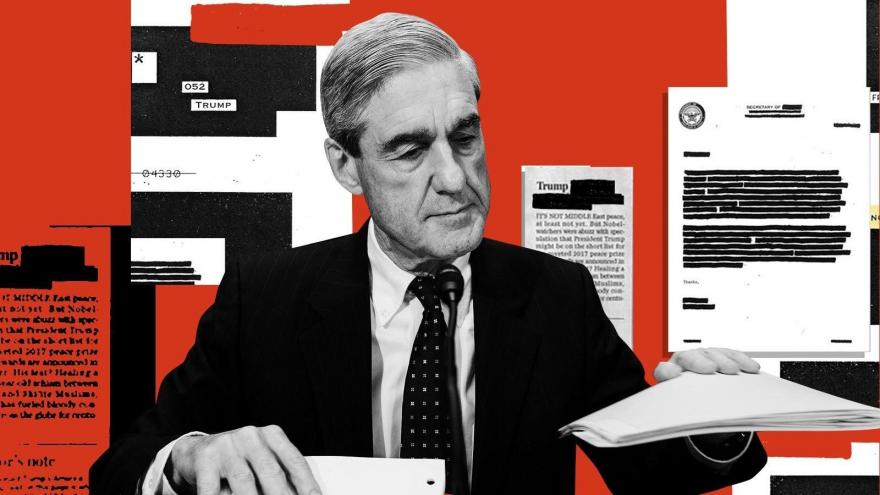 But Barr conveyed to his team he still wants to get the conclusions to the Hill by this weekend, according to the Justice official.

The official said that Barr and Rosenstein, along with a select few advisers, were still there as of Saturday afternoon.

The "principal conclusions" that Barr promised lawmakers will be derived from the special counsel's report -- a distillation of the main takeaways from the report, rather than a word-for-word summary.

The expectation, according to the official, continues to be that the document sent to Congress with the conclusions will also be made public.

Barr's submission to Congress and the public is being eagerly anticipated on both sides of Pennsylvania Avenue, with lawmakers and the White House waiting to learn more about Mueller's findings.

But the waiting game will continue for at least one more day now, after Mueller submitted his report to Barr on Friday.

Barr announced on Friday evening that Mueller had submitted his confidential report and that the 22-month special counsel investigation had concluded.

The end of the investigation also means that no more indictments are coming from the special counsel, according to a Justice Department official, which Republican allies of President Donald Trump say is a sign that the President will be vindicated by the Mueller report.

But a battle is brewing between the Trump administration and congressional Democrats over Mueller's report. Democrats say the public needs to see Mueller's full report for itself — and not a summarized version from Barr — and they are demanding that Mueller's underlying evidence is provided to Capitol Hill.

House Democrats held a caucus-wide call Saturday afternoon to discuss the next steps for the House, which has its own sprawling set of Democratic-led investigations into Trump's administration, finances and business already underway.

They renewed their demands for full transparency of the Mueller report, according to people on the call.

Democratic leaders circulated talking points to their members arguing that "the White House must not be allowed to interfere with the report's release."

The talking points include details about why they believe there's precedent supporting the release of a report, pointing to the hiring of a special counsel in 1999 to investigate the 1993 incident in Waco, Texas. They also point to precedent involving the Justice Department providing 880,000 pages of internal material last year to the House as part of the GOP probe into the FBI's Hillary Clinton investigation -- as well as how the Justice Department provided records to the Hill over the Watergate probe.

"If necessary, Democrats would be prepared to use its subpoena authority to obtain the full report and underlying evidence as well as to obtain briefing and testimony from the Special Counsel, the Attorney General, Deputy Attorney General and other necessary officials," the talking points said.

On the call, which lasted roughly 35 minutes, Democrats argued that the public will is overwhelmingly on their side for full transparency, pointing to public opinion polls to make their case.

"Right now, we are in the mode (of) wanting to know the truth, wanting the facts so that our chairpersons and members of the committees can take a look into this going forward," Pelosi said, according to a person on the call.

Allies of Trump have pointed to the fact that none of the indictments against the Trump associates were tied to any conspiracy to collude with Russia during the 2016 campaign.

It's still not known what Mueller found with respect to the President, but the fact he was not subpoenaed for a sit down interview with the special counsel's team is a significant triumph in itself for Trump and his legal team.

Barr wrote in his letter that throughout the investigation, Justice Department leaders never told the special counsel a proposed action should not be pursued.