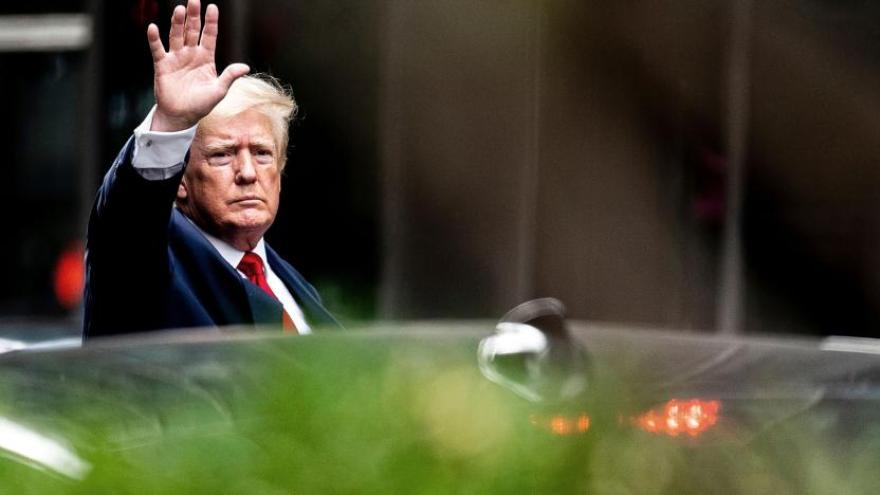 Former President Donald Trump waves as he departs Trump Tower on August 10 in New York City. A federal appeals court ruled that the DOJ must make a public memo analyzing whether to charge Trump in the Russia investigation.

(CNN) -- The Justice Department must make public an internal legal memo commissioned by then-Attorney General William Barr in 2019 to analyze whether he should charge then-President Donald Trump with obstruction related to the Russia investigation, a federal appeals court ruled on Friday.

The ruling from the DC Circuit Court of Appeals comes in a case brought by a government watchdog group that is seeking to get the unredacted version of the memo. The DOJ argued some redacted portions should be shielded from public view.

But the federal appeals court didn't buy that argument, finding that Barr never seriously considered charging Trump with obstructing the Mueller investigation -- saying in the ruling that the memo Barr ordered up was an "academic exercise" and a "thought experiment."

Special counsel Robert Mueller's investigation found several instances where Trump's actions while president could meet the requirements for an obstruction of justice charge, but Mueller left the decision to Barr.

Barr then told Congress he was "consulting" with top DOJ officials on whether there was enough evidence to show Trump committed obstruction. But that was misleading, the courts have found and the Justice Department has since acknowledged.

Barr had already decided the sitting President would not be charged with a crime, Chief Judge Sri Srinavasan of the DC Circuit wrote in the new opinion.

The DC Circuit likened the Trump charging analysis that Barr requested from the DOJ's Office of Legal Counsel and others to him asking for a departmental position on whether the late President Richard Nixon broke the law during Watergate -- an imaginary request that could be made "because [the attorney general] had simply been curious," the appeals court wrote.

The court ultimately ruled on the side of the group Citizens for Responsibility and Ethics in Washington after the DOJ tried to argue its redactions were still valid because they protected legal deliberations. Those legal deliberations didn't exist in this circumstance, the court decided, agreeing with lower court judge Amy Berman Jackson.