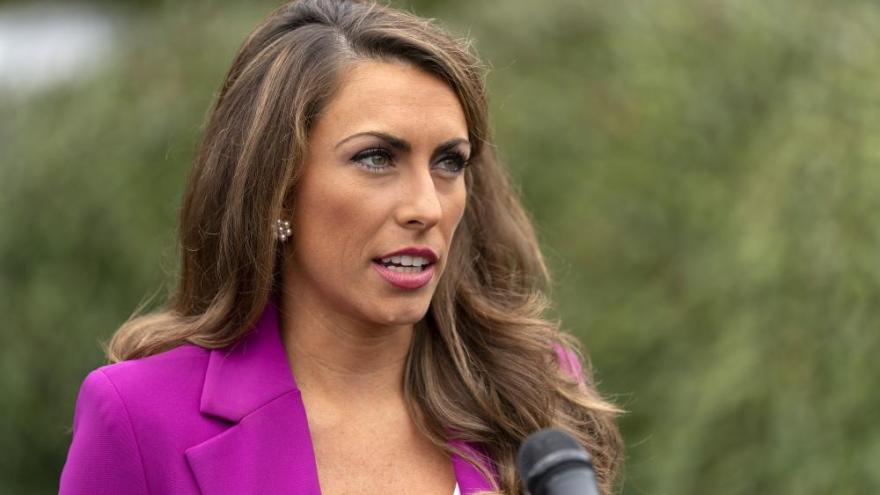 Alyssa Farah, White House director of strategic communications, speaks to members of the media outside the White House on Wednesday, October 21, 2020.

(CNN) -- The Department of Justice has reached out to other Trump White House officials regarding the January 6 attack on the US Capitol in addition to two top aides to former Vice President Mike Pence, a former administration official told CNN on Wednesday.

Alyssa Farah Griffin, a former White House communications director during the Trump administration who is now a CNN political commentator, said she had not been contacted by the Justice Department but she was "aware of other White House officials who have been reached out to by DOJ and are planning to cooperate."

"I don't want to get ahead of their announcements but I think you could piece it together based on who has testified before the January 6th committee. Again, these are not -- these are related but separate-track investigations and I think DOJ is keeping an eye on who is coming before January 6th and who may have helpful information," Farah Griffin told CNN's John Berman on "New Day."

A spokesperson for the US attorneys' office in Washington declined to comment.

The criminal investigation into the US Capitol attack on January 6, 2021, and attempts to disrupt the transfer of power between the Trump and Biden administrations is the most wide-ranging in DOJ's history.

The Justice Department has already brought two top aides to Pence in front of a federal grand jury, a move that signals its probe has reached inside former President Donald Trump's White House and that investigators are looking at conduct directly related to Trump and his closest allies' efforts to overturn the 2020 election.

Marc Short, former chief of staff to Pence, confirmed to CNN on Monday that he testified last week in front of a grand jury investigating the insurrection at the US Capitol. Former Pence chief counsel Greg Jacob testified in recent weeks as well, CNN has learned from a source close to the investigation.

Farah Griffin told CNN later Wednesday she's aware of a former "mid-level" Trump official who has been contacted by the Justice Department.

This official, she said, could help the Justice Department with "what they're looking into, specifically around similar questions to what Short was asked about, which is the pressure campaign on Mike Pence in the days leading up to January 6, the schemes of things like fake electors, and even some of these creative ways that certain officials at the Department of Justice wanted to bypass the law to try to hold on to victory."