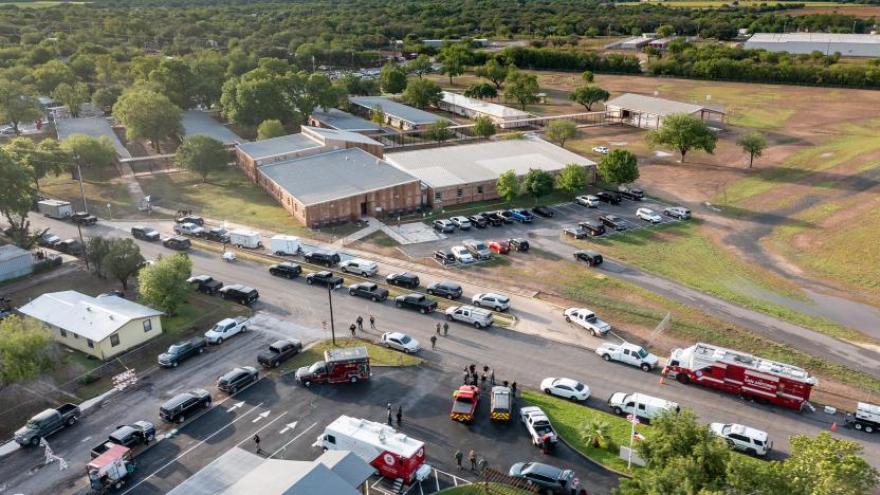 The US Department of Justice has named a team to lead its review of the law enforcement response to the bloody siege in Uvalde, Texas, where a gunman killed 19 children and two teachers.

(CNN) -- The US Department of Justice has named the team who will lead a federal review of the response to the deadly rampage at Robb Elementary School in Uvalde, Texas -- where a gunman killed 19 children and two teachers and remained in the school for more than an hour while police waited nearby.

The review will be led by the DOJ's Office of Community Oriented Policing Services (COPS), US Attorney General Merrick Garland announced Wednesday. It will be supported by experts including retired police chiefs and an FBI official.

"We will be assessing what happened that day. We will be doing site visits at the school. We will be conducting interviews [with] an extremely wide variety of stakeholders," including victims' families, law enforcement, government officials, school officials and witnesses, Garland said.

He emphasized the DOJ investigation "is not a criminal review." Rather, it "will examine issues including policies, training, communications, deployment and incident command, tactics, and practices as they relate to preparing for and responding to active shooter events, as well as the post-incident response," the DOJ said.

The DOJ said the review was requested by Uvalde Mayor Don McLaughlin. The mayor cited "some missteps" by the Texas Department of Public Safety after it released details about the shooting that later turned out to be incorrect.

But McLaughlin quickly added that he was "not blaming anybody."

"We were told one thing one day, and the next day the narrative changed. You were told for a week that a teacher propped the door open with a rock -- and at the end of the week that story was gone, too," the mayor said.

"We want the truthful answers. We want to be transparent, and we will when it comes out. We have nothing to hide."

The DOJ conducted similar reviews after the 2015 deadly rampage in San Bernardino, California, and after the 2016 Pulse nightclub massacre in Orlando, Florida.

A girl who covered herself in her friend's blood testifies

As the DOJ investigates the police response, members of Congress heard from a girl who survived the massacre after covering herself with her friend's blood and playing dead.

Miah Cerrillo, a fourth-grader during the May 24 massacre, told the House Committee on Oversight and Reform what happened before and after the gunman shot her teacher in the head.

The killer "told my teacher, 'Good night,' and shot her in the head," Miah said in pre-recorded testimony played Wednesday.

"And then he shot some of my classmates... He shot my friend that was next to me."

Miah said the gunman went into an adjoining classroom. Fearful that he might come back and target her, Miah said she "grabbed the blood and I put it all over me."

At one point, Miah managed to get her teacher's cell phone and call 911. But the response was confounding.

"I told her that we need help, and she said the police in our classroom," Miah said.

Her father, Miguel Cerillo, who was at the hearing, broke into tears after his daughter's video played.

"I wish something would change -- not only for our kids, but every single kid in the world -- because schools are not safe anymore," Cerillo said. "Something needs to really change."

Victims were trapped with the gunman for more than an hour

Children inside the adjoining classrooms made multiple calls to 911 while officers waited outside the classrooms.

As many as 19 law enforcement officers were inside the school for more than 45 minutes before the suspect was finally killed, the Texas DPS said.

It's not clear how many of the 21 slain victims could have been saved had police stormed the classrooms sooner.

The incident commander's hesitation to breach the classroom has been widely criticized and goes against many law enforcement protocols.

More than an hour after the shooting started, the gunman was shot and killed by a Border Patrol tactical response team.

McLaughlin said Tuesday he's frustrated with the lack of transparency from law enforcement on the investigation.

"I've been told that they're law enforcement and we're not. We're not going to be entitled to it," the mayor said. "I've asked everybody involved for a briefing at one point or another."

The Uvalde school district police chief was the incident commander at the scene and decided not to immediately enter the classroom where the gunman had holed up, Texas DPS Director Col. Steven McCraw said.

That chief, Pedro "Pete" Arredondo, typically leads a police force of six officers. In an interview with CNN, he declined to talk about details of the case, citing the ongoing funerals, and said more information would be released when the "families quit grieving."

Arredondo, who was elected to the Uvalde city council prior to the massacre, was sworn in last week in a private ceremony.

The Texas Rangers -- part of the Texas DPS -- are investigating the police response to the horrifying attack. That probe is separate from the federal DOJ review. Associate US Attorney General Vanita Gupta helped coordinate support from Texas officials at the request from the Uvalde mayor.

'There is no excuse for their actions'

Arnulfo Reyes, a Robb Elementary teacher who was shot twice during the bloodbath, said he was furious about how the tragedy was handled.

"After everything, I get more angry because ... I had nothing" for protection, such as a bulletproof vest, Reyes told ABC's "Good Morning America."

"You're supposed to protect and serve ... There is no excuse for their actions. And I will never forgive them," the fourth-grade teacher said.

Describing the first moments of the shooting, Reyes said he and his students heard gunshots and he told them to "get under the table and act like you're asleep."

"As they were doing that, and I was gathering them under the table and told them to act like they're going to sleep, is about the time when I turned around and saw him standing there."

The gunman opened fire, striking Reyes; one bullet went through his arm and lung, and another hit his back, ABC reported.

Reyes couldn't move after being shot, he said, and the shooter then turned his gun on the students.

Officers could be heard outside the classroom, and a child in another classroom pleaded for police to help, Reyes said. But Reyes thinks that by that time, officers had retreated down a hallway, he told ABC.

"One of the students from the next-door classroom was saying, 'Officer, we're in here. We're in here,'" he said. "But they had already left."

When the Border Patrol unit eventually came inside, "it was just bullets everywhere," he told ABC.

When asked if he had a message for the students' parents, Reyes tearfully replied: "I'm sorry. I tried my best from what I was told to do. Please don't be angry with me."

He also said change is needed to prevent such school massacres in the future.

"You can give us all the training you want, but ... laws have to change," he said. "It won't ever change unless they change the laws."