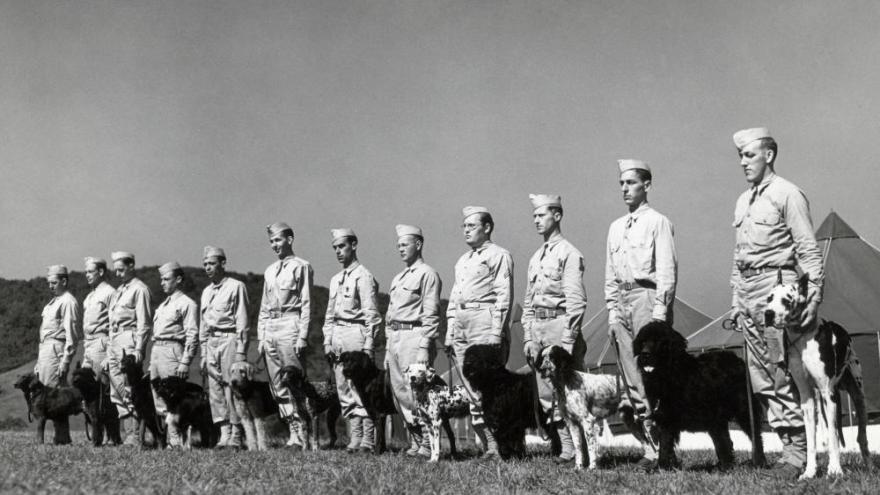 A dozen dogs and soldiers stand in formation for their inspection after grooming to be inducted into the US Army at the Canine Reception Center in Front Royal, Virginia.

(CNN) -- This week, President Donald Trump shared a declassified photo of a military working dog that was injured during the weekend raid that took down ISIS leader Abu Bakr al-Baghdadi in Syria.

Although details about the K-9 aren't public -- the Pentagon has said the dog's name needs to remain classified due to their affiliation with a classified unit -- it's a welcome reminder that military working dogs are an important and ever-present thread throughout America's military history.

In fact, dogs have been assisting military efforts all over the world for thousands of years. Here are some other things you may not know about these highly-trained canines.

Dogs were mentioned in accounts of ancient warfare

Dogs of all sorts have been used as hunters, herders and sentinels for pretty much all of recorded time (the term "watchdog" exists for a reason). So it's not that much of a surprise to learn dogs have followed -- and sometimes led -- great armies into war. According to the writings of ancient scribes like Homer, Polyaenus and Herodotus, dogs were present in Xerxes' invasion of Greece in 479 BC, during Spartan sieges in the 4th century BC, and as early as 600 BC in a battle in the Iron Age kingdom of Lydia in Greece.

Major Matthew Kowalski is the 341st Training Squadron commander at Joint Base San Antonio in Lackland, Texas. The 341 TRS operates the Department of Defense's Military Working Dog Program, which is overseen by the United States Air Force. This group is responsible for virtually everything related to military working dogs -- their procurement, their training, their handlers, their assignments, and whatever services they may need after their time as a working dog is over.

Kowalski says the roles of these dogs have changed over the years.

"In the Korean War and Vietnam, they were used as tunnel dogs and sentry dogs," he tells CNN. "All the way up to now, where we use the dogs to hunt down and find IEDs or to find people as trackers."

While the specific tasks and skills of the dog involved in the Syria raid is unknown, Kowalski says, "dogs are trained for either detection work or patrol work, often times both. Whatever the mission, the dog is trained to perform the task at hand."

"For working dogs that task is like a game," he says. "Their goal is to please their handler and receive a reward for a job well done whether it be detecting explosives, finding an asset or any other task."

There are all different breeds and specialties of working dog

There are just under 1,600 active working dogs managed by the Department of Defense's program. While German Shepherds and Belgian Malinois are two of the most common breeds of working dog, Kowalski says there are other breeds in the program, all suited for different tasks and environments.

"It really depends on what the task is," he says. "If the purpose is mainly detection work, departments may choose a Labrador or Golden Retriever. Since our partners in the Navy sometimes work in confined spaces like submarines or ships, we have had requests for small breed dogs like Jack Russells and Beagles, and we'll train those dogs as single-purpose, detection-only assets."

Also of note: While "military working dog" is an umbrella term for these types of K-9s, some of the dogs managed by the DoD work for other federal entities like Customs and Border Patrol and the TSA. These dogs, Kowalski clarifies, aren't MWDs. They can be referred to as contract working dogs, and are still federal assets.

Some of their skills are irreplaceable

So, why dogs? Why not replace them with a person or a machine? In short, it would be pretty much impossible.

"These dogs are amazing assets," Kowalski says. "A lot of our science and technology for years has been trying to replicate the work these dogs do. Their olfactory glands are 10,000 times more sensitive than any piece of equipment we've been able to develop. So the detection work they do, a dog finding explosives or drugs, that's never going to be replaced."

Of course, there are intangibles, too: Military working dogs are treasured companions for their handlers and compatriots, and the bonds they share with their human counterparts often last long after the dog has ended its time of service.

"We have a tradition in the program. The K-9s don't have a formal rank by structure, but they do traditionally hold the rank of a non-commissioned officer. Handlers are E3s, E4s, and their dog always outranks them," Kowalski says. "The reason the dog outranks the handlers is so that the handler always has respect for them. You always have respect for your senior NCOs [noncommissioned officers]. And these dogs are partners. They're not pieces of equipment."

There have been famous war dogs throughout American history

While we may never know more about the dog present at the raid in Syria, several other notable military dogs have a comfortable place in American history. A Belgian Malinois named Cairo was involved in the 2011 raid the ended with Osama bin Laden's death. Before military working dogs were officially part of the US Armed Forces, a little dog named Sergeant Stubby was a fixture in the US's 102nd Infantry Regiment during World War I.

In recent years, the sacrifices and heroism of military working dogs have gained more attention, and several memorials have been erected to memorialize them. The Military Working Dog Teams National Monument, dedicated in 2013, stands on the grounds of Joint Base San Antonio, the same place where so many of America's best and most loyal dogs begin their service.